I Was Almost 21 Before My Father Said, “I Love You” 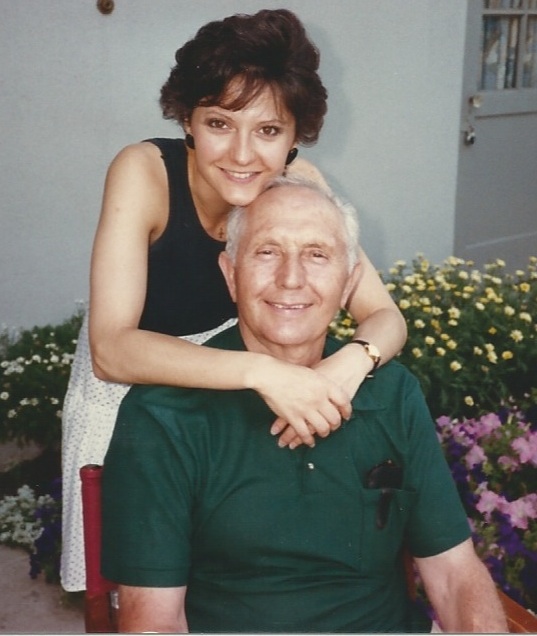 My dad was never one of those “I love you” guys.  He was affectionate, gave me hugs and the occasional kiss on the cheek, but those words never left his lips when I was young.

When I was five, he was my idol.  When he walked in the door after a long day working as a brick mason, I ran to him and hugged his leg (that’s about all you can reach when you’re five) inhaling, what to me, was the sweet smell of my dad — brick and mortar dust.  He’d reach down, tousle my frizzy hair and say, “Hey stinker, how you doin?”

He didn’t coddle me or my siblings, especially my brothers. They had a nickname for him; “The Ogre,”  because he was so tough on them — always making them work.  If they’d call to him and say, “Hey Ogre!”  he’d good-naturedly respond, “There’s no Ogre here.”

If I got a scrape or a cut, he bandaged me using his army medic’s knowledge. He’d try to apply iodine until I put up too much of a fuss.  He painted our throats with something purple and awful tasting he said would stop us from getting sick.  When I did get sick, he stayed with me until I swallowed the foul cough medicine (which sometimes took a half hour.) When I got sick in the middle of the night and was throwing up in the toilet, he was always there holding my forehead as I retched.

Every night before he went to bed, he came in our room and knelt before statues of Jesus, Mary and Joseph to pray.  Then he’d get up and kiss me and my sister goodnight.  Even when, like dopey kids, we thought it would be funny to see if we could plant straight pins where he walked to see if he’d step on them, (which he did) he didn’t get too mad. He also tolerated the two of us whistling at him in his boxers, teasingly calling him Marilyn Monroe.

If I’d eaten all my meat at dinnertime, he gave me the rest of his.  After dinner, he tilled the  garden until dark.   He showed me how to turn over dirt in the garden, how to plant seeds and how to grow things. Sometimes I got rides in the wheelbarrow. He took us to pick blackberries in the summer and mushrooms in the fall.

He took me on a job with him once and I listened to the homeowner, a friend’s father, bragging about one thing after another, while I watched my dad work and listen. I handed him tools and watched him cut the white tile and lay it in perfect lines. .

I followed him around like a puppy and asked questions constantly.  He always had an answer and never said be quiet.  He talked to me and listened as if I mattered. He also gave me jobs to do.  When my brothers left for college, I had to cut the grass with the riding lawnmower, the coolest thing ever for a nine-year-old.  It was my job to wash the car too and, of course, help my mom with everything.

When I was almost 21-years-old my dad learned he had melanoma. In 1976, melanoma was pretty much a death sentence, unless you were lucky enough to have caught it very early.

Not long after the doctors confirmed it, we were in the driveway.  I think he was leaving to go for some tests, and he finally said, “I love you.” I remember hugging him and crying. It was the first time I ever saw him emotional. He couldn’t say anything, he just hugged me back and we awkwardly let go, both teary eyed.

He beat the cancer and lived another 37 years, but every time I left him after that, we always had the same awkward, sweet moment saying goodbye.  My dad passed away last year at 97 and I miss him every day.

My dad never told me he loved me until I was almost 21, but I never doubted that he did, not for a second.