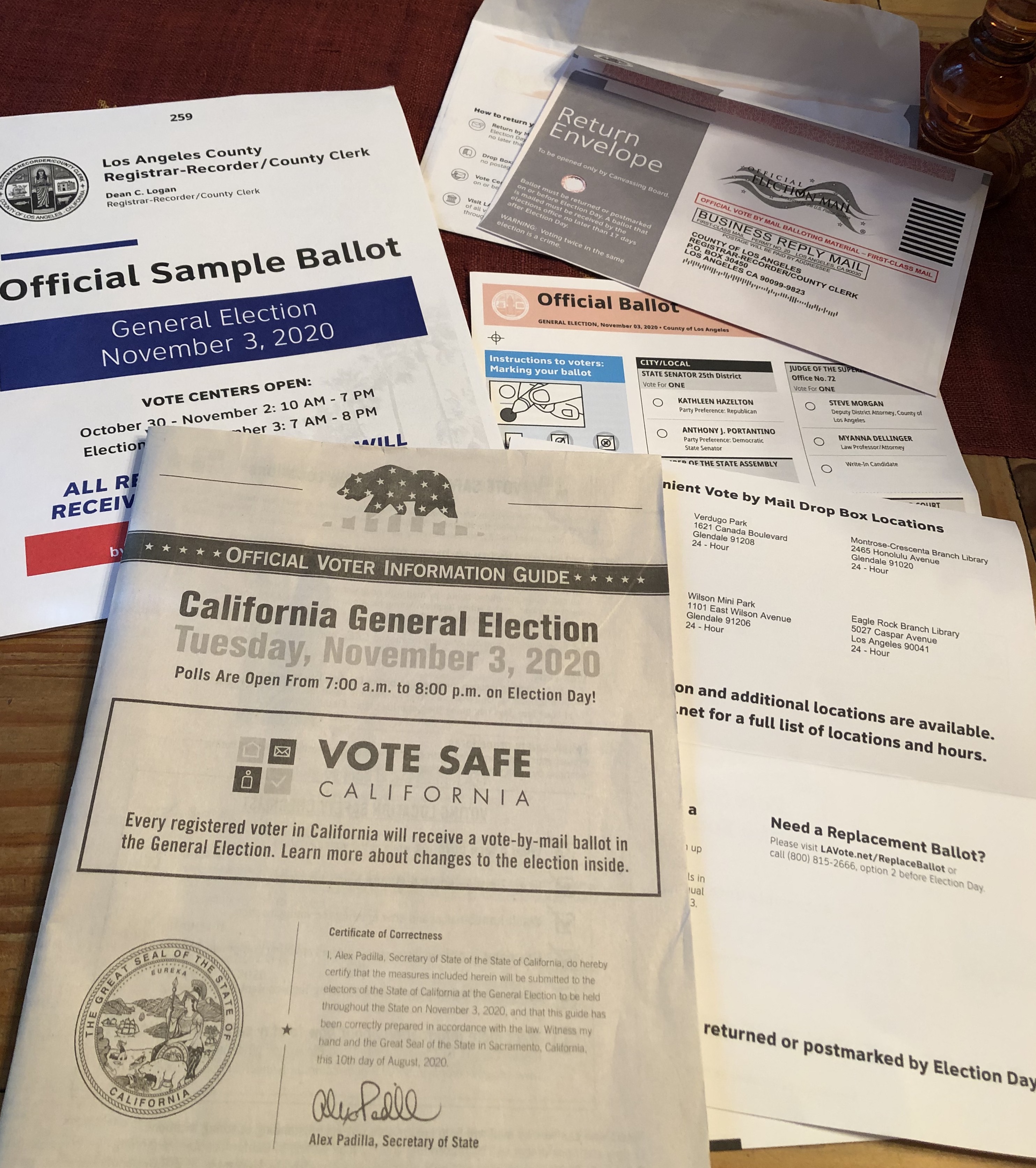 I’m at my dining room table staring my mail in ballot. I like the fact that I can vote with hair conditioner on, under an electric heating cap, looking like an alien in a bad 1950s Sci-fi movie. I’d share the image, but am too vain to give you that kind of belly laugh right now.

I usually vote in person because my parents did, and took great pride in being able to do so. They believed in this country and voted at the Daugherty Township fire hall for every election, always reminding me how important voting was. Below the voting info here, is an excerpt from a campaign speech given by John Kennedy in 1960. It really distills what your vote means. I urge you to read it because things have not changed all that much.

Corona Virus makes the prospect of voting in person a little less enticing, so I’m voting early and using the Secure Dropbox because I too, believe in this country. But I was worried about drop boxes, because of the plethora of opinions surrounding vote by mail, especially via the USPS. I’m registered in Los Angeles County, so I went to the LAVote.net website – a totally great group of people, who I’ve worked with. They are absolutely dedicated to a fair and safe election and have a list of drop boxes you can use.

Don’t let anyone convince you this election is rigged, it is not. Just because someone says something doesn’t make it true, no matter how many times it’s repeated. As Spiro Agnew, Republican Richard Nixon’s Vice-President once eloquently said, “In the United States today, we have more than our share of nattering nabobs of negativism. They have formed their own 4-H club — the hopeless, hysterical hypochondriacs of history.” (That was written by William Safire – gotta give brilliant writers the credit they deserve.)

Here’s what I learned and want to pass along. Please feel free to check the voting website in your area too. We can do this and it WILL be fair. You can even check to make sure your ballot has been received:

In LA County there are 400 Secure Drop Boxes Available to All Voters Beginning October 5. Here’s what’s true about them:

Before you drop off your Vote by Mail ballot make sure you:

How to Check if Your Ballot was Received and Counted

After returning your voted ballot via Drop Box or by mail you can check your ballot to make sure it was received and tallied through our Vote by Mail Status Tool.

I ask that, before you vote, take a moment to read these excerpts from a speech John Kennedy made at the East LA College Stadium on November 1, 1960. My friend Linda said her home was in the hills nearby and she and her mom sat and listened as his words rang out.  His thoughts are as eloquent and maybe more meaningful today than they were in November of 1960, almost 60 years ago.  I have some excerpts listed below, but here is a link to the full speech: https://www.jfklibrary.org/archives/other-resources/john-f-kennedy-speeches/east-los-angeles-california-19601101

“Whoever wins, the task will not be easy — I am just trying to keep it open, you know what is going to happen — (Laughter and applause) The next President’s desk will not be clear, waiting for new problems and responsibilities. It will be piled high with old problems, inherited, chronic problems, old bills demanding payment, ambassadors demanding new instructions, legislation previously submitted needing to be redrafted.

But as the new President turns to meet these old problems, new pressures will rush upon him, new crises from every section of the world, new decisions on weapons, on strategy, on economic policy, and a thousand other items. There on that one desk, on the shoulders of the next President of the United States, will converge all the hopes and fears of every American and, indeed, all the hopes and fears of every person in the world who believes in peace and freedom.

Whatever the issue, however critical the problem, the President will sit alone. He will have his advisors, his cabinet, the sources of information and ideas; the final decision is the President’s alone. Harry Truman used to have on his desk the sign “The buck stops here.”

For four years, the reins of this nation will be in his hands and he will speak for America. For four years, no other decision that you make will be half so important, no other act in your daily life will entrust so much of your future to one man, one party, in his judgment and his foresight. Fully aware of this grave and somber and sober responsibility, I am asking the people of California and the nation to place their trust and confidence in me.

Some may feel that their life is wholly unaffected by this decision, that their job is secure, that their rent is paid, that their taxes are paid, and are all likely to be the same, which ever man and whichever candidate holds this high office. But I want to make it clear that every American is affected by what happens. Our prestige abroad, what other people think of us, is not of importance only to those Americans who work abroad. The sign “Yankee go home” does not apply only to our diplomats and our soldiers. The great struggle in the world is not one of popularity, but one of power and our power in considerable measure depends upon our ability to influence other nations, to identify ourselves with them, upon their willingness to associate with us, upon their willingness to follow our leadership.

That means that people who are now undecided may not be so willing to follow our leadership in the future, may hang back, may be neutral, may be uncommitted, may vote against us in the United Nations, may stand aside as we become gradually weaker.

All of these problems, all of the hopes for peace, all of our hopes for security, all hang on the question of what kind of a society we can build in the United States.”

Apparently, I AM My Mother