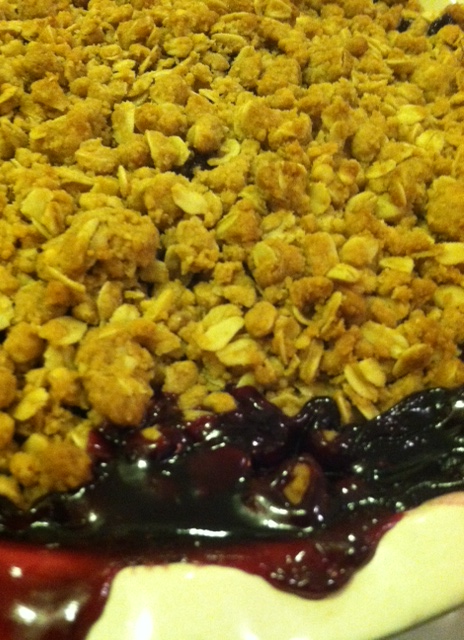 Summer means fruit pie season and I am a ho for fruit pies and crisps — especially right out of the oven with vanilla ice cream on top. Every time I overeat then vow to cut out sweets completely (this happens weekly) I realize I could never do it if it meant not having fruit pie again.

This is clearly genetic. My brothers are  both ho’s for blackberry pie and my sister is a ho for any pie. At family get-togethers, she makes her way, like a cat burglar, to wherever the pies are stored and sneaks a piece before anyone even lays eyes on them.

I’ve been baking pies for 20 plus years, but didn’t start until I was about 32. I thought, Oh, how hard can they possibly be? My mom knocks out 20 at a time! Maybe I’ll try one someday. But I was young, poor and didn’t have her recipe because she never used one.

The few recipes my mom used were usually handwritten on a stained piece of paper, napkin, placemat or paper towel, which she kept folded in an empty Maxwell House coffee can or old cookie jar. But there was no pie recipe.

Her idea of measuring was showing me how she twisted a big spoon in Crisco in a way that was sort of equal to a cup.

Peach Crisp because my kids can’t get enough of it. See, it is genetic!

I was coming to terms with the fact that my mother’s salami habit pretty much insured she wouldn’t be around forever, and her recipes would be lost if I didn’t sit her down and force her to commit to measuring and explaining them. I wanted them so I could re-create them for the children I kept putting off having.

So one year when my mom was visiting me in L.A., I invited a food-loving friend over so my mom could teach us  her pie-making secrets.

In 1986 my vacationing mother shared my single apartment in L.A. for a week. My parents were banned from visiting me as a couple because they made Ralph and Alice Kramden look like lovebirds. Dad was a hardworking nature guy who loved to garden and walk and Mom loved entertainment, movies, TV shows, food, and being driven. Individually, I could spend time doing what each of them liked, but joint visits were a disaster.

During the first three days of her visit, my mother had a fight with Sonya, my large, red-headed, hot-tempered, Russian landlady, decided that Farmer’s Market on Fairfax was her favorite place on Earth, accepted a ride home in a red convertible from two nice, male strangers she met in a bakery and asked the tough Jewish waitress at Canter’s delicatessen if she could try the beagles instead of correctly pronouncing bagels. I calculated: one fight, no robberies or abductions and only minor embarrassment — on the Mama Tunno scale, this trip was going well.

With that optimistic mindset, I invited Joann over. She was a close friend of the man I was dating and I wanted to get better acquainted. We’d talked about baking pies and, since she liked to cook and had a good sense of humor, I figured why not?

I’d just started dating Roger, but in the beginning my mother was not sold on him; she had a problem with the ex-wife and kid part. This was pretty good for her, considering her preference for Italian, Catholic, single, good-looking, charming, wealthy, successful doctors. At that point he only had good looking and charming going for him. Although her requirements for my suitors relaxed significantly every year I crept past thirty, she still needed to be reassured he was worthy.

It was always a leap of faith to introduce any friend to my mother, because she was definitely a loose cannon, but naively, I  thought, what could she possibly say? (This is a recurring theme in my stories.)

Joann accepted my invitation and the three of us sat at the small, square butcher block table in a corner of my tiny kitchen, drinking juice and talking before getting started on the pies. Never one to get bogged down in small talk, my mother immediately started asking Joann about Roger. How long had she known him, what was he like, why did he split up with his wife, could he be trusted, and did he fool around?

Joann, who was raised Catholic, dutifully told the truth. Yes, he fooled around, that’s how he got the child, but he did marry the girl and it just didn’t work out.  (Mom already knew this part but was digging for information.)

“Well, I’ve known him for a long time and he’s been a good friend.”

“Butta he fooled around witta dissa gal and a now she has a baby, ha do we know we can trost a him?

“You mean a people fool around a summatimes anna dey getta caught?”

“Butta honey, nize a gals a don’d a fool a round.”

Joann got this slightly embarrassed look on her face and said something that I thought took such bravery, I was unbelievably impressed. She laughingly said, “Yeah, they do.”

This completely threw my Mom. She’d never heard this kind of talk before and certainly wasn’t going to hear it from me because I wanted to live.

Then Mom said, “Yeah — you do?” And Joann sheepishly admitted she did.  The whole time, I’m watching closely, silently cheering that someone finally had the nerve to give it to her straight. And my mom said, “Andda you’re such a nize a gal — you’re not ashamed a to tella me dat?”

Joann laughed and said, “No.”

I swear this moment gave me lifelong respect for Joann, who I still think is one of the strongest, most wonderful people in the world. Her response completely threw my mother because fooling around immediately placed a girl in the “puttana” (whore) category. According to my mother, there were only two classifications, puttana (whore) and “niza gal” (virgin.)  The twain never met, period.

After this discussion Mom was left wondering if she might have to add a third category; “niza gals who fooled around.” Joann passed the true friend litmus test effortlessly and taught my Mom something I would never have attempted.

I moved us on to pie making, figuring Joann already offered enough information. Mom suffered through cutting the recipe down to two pies instead of twelve and I actually got her to measure with real measuring cups. She was even able to show us what magic she did with her hands, but it took me three or four times before I truly got the hang of handling pie crust.

We tried to enter one of her pies in the Canfield Fair, but she was disqualified on a technicality; they were expecting a double crust, and we delivered a “crombling.”

But she didn’t need a ribbon because she was already convinced her pies were, “da best.” She never even considered the possibility that other pies might be better, not even her own children’s. In fact, each Thanksgiving in the Annual Tunno Pie Competition, which pitted her pumpkin pies against her children’s, she tried to insure victory by bribing her grandchildren with dollar bills.

There were also great streaks of creativity in her pie baking which were responsible for two of her most masterful creations, blackberry/blueberry pie with peanut butter crust and crumble and cherry pie/peach pie with “crombling” almond crust.

I have since revised her crombling crost, adding brown sugar and oats (she would approve).  My brothers tasted my blackberry pie with peanut butter crumble and told me it was the best pie I ever made.  My brothers would rather be impaled than deliberately flatter me, so it must have been good.

Shortly before my mother passed away, she made her usual two to three dozen pies and stored them in the freezer. She even labeled each pie so we’d know what the filling was. My favorite was the label made from a torn piece of paper towel that said, “Cheery pay,” (cherry pie).

Every time we ate another frozen pie we felt as though we were losing a little part of her and once they were gone another trace of her would be wiped away forever. Don’t worry, it took us nearly three years to reach the last pie, but we had to eat them.  She’d have never forgiven us if we’d let them go to waste. Besides, she’ll never truly be gone because every time I get a whiff of pie baking in the oven, I think of her.

Mix flour, salt and sugar together then cut in Crisco.  Mix well, it forms small crumbs.  Add enough milk so that dough can be molded into soft balls.  Better that the dough is too soft and sticky than too hard. Once you add the milk and have made about four or five balls, wrap each one in flour coated plastic wrap and flatten out dough.  Place in refrigerator or freezer to cool. After the pie is made and ready to put in the oven, you can gently brush the crust with the white of an egg to give it some shine and a nice crunch.

Take one of the flattened, cooled pie crusts and add one to two tablespoons of creamy peanut butter to it.  Just spread it on the rolled crust, then fold it over three or four times. Roll it out on a floured board and place it in bottom of a pie pan.  The peanut butter should look like swirls in the crust.  Don’t mix it so much that the whole crust is brown. Flute the edges.

Mix together dry ingredients, then add melted butter with fork, stirring to make sure all ingredients are combined.  It should look pebbly. This is enough to cover two pies or crisps.

Note:  If sweeter apples are used, use less sugar, if apples are sour, use more sugar.

Mix together apples and squeeze lemon juice over them. (Be certain to seed the lemon first)  Then mix apples with cinnamon, sugar and flour.  Place apples inside bottom crust. Place five pats of butter over fruit.  Then put top crust on and pierce holes in crust with fork.  Bake at 350 for an hour or until golden brown and apples are bubbling

Once fruit is in bottom crust, follow same directions as for two crust pie, but sprinkle on crumbly topping instead

This blackberry pie with peanut butter crumble is so good, you may die of happiness. Just warning you.

Mix together the berries, flour and sugar then place them in the bottom crust. Sprinkle a light covering of the peanut butter crumble (enough to cover it) on top of the pie.  You don’t want too much or you’ll have all crumble and no fruit.  Bake at 350 for an hour or more or until you see the pie really bubbling and crust is brown.  Use a pie crust shield to protect crust from burning.

Peach Pie with Almond Crumble (It’s delicious with the Basic Crumble too!)

For the peach filling:

Roll out Basic pie crust and place in pie pan.  Put in chopped peaches mixed with almond flavoring, sugar and flour. Sprinkle with Almond crumble and bake an hour or until very bubbly.