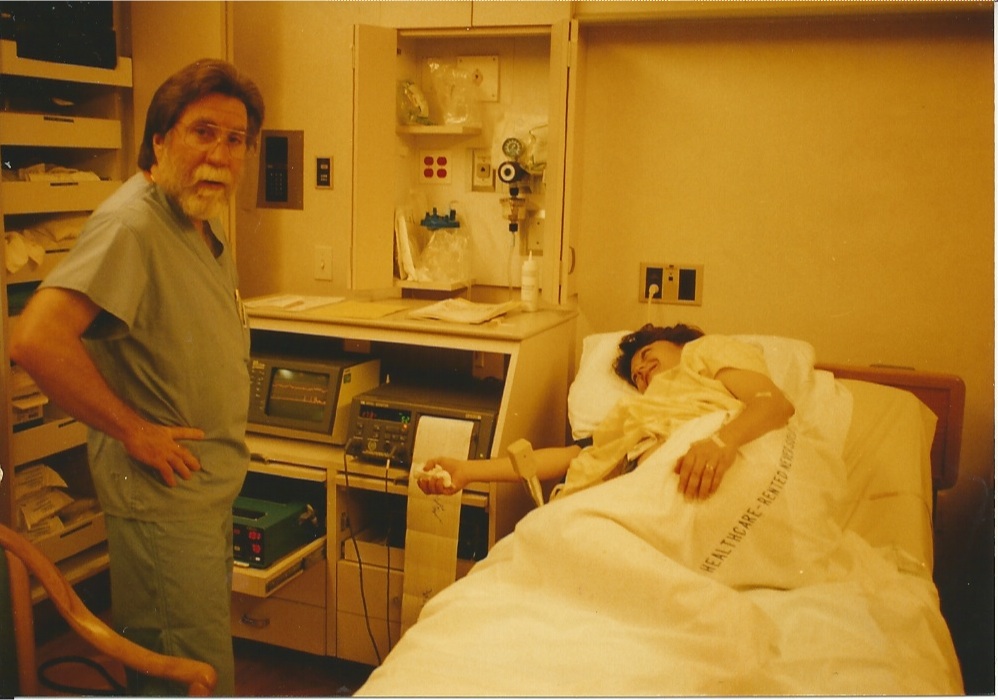 I just found out that the doctor who delivered my two children passed away this year and I’m unbelievably sad. I’ve been thinking  a lot about Dr. Sanford Tisherman and  why he meant so much to me. Yes, he had a couple of unfair advantages over everyone else;  he definitely saw things other men haven’t, and he helped bring two of the most important people in my life into the world, but it’s more than that.

I now understand my mom’s worship of her Ob/Gyn doctor. The way she talked about the man who delivered her children, you would have thought he descended from heaven in golden robes, surrounded by rosy cheeked cherubim. She always had a light in her eyes and a trembling smile on her face when she mentioned Doctor Marino and how he helped her through childbirth. “God a bless a Dottor Marino,” she always said, and it seemed that the sun shone a little brighter at the mere mention of his name.

I didn’t understand this until I had children. But once you attempt to force a fully grown baby through an opening the size of a change purse, you get it. There’s no question it’s a miracle. Now when I talk about Dr. Tisherman, I have the same look my mom had. Maybe he was godly, look at the golden glow surrounding him in the cover photo!

Unlike a lot of women, I can count the number of men who’ve peered into my nether region, on one hand. So, choosing an OB/GYN was a pretty big decision.  I wasn’t sold on having a man as my OB/GYN until I met Dr. Tisherman. I’ll never forget the day I sat in his office trying to decide who to choose as my doctor. He invited me into his private office, and we sat and talked for a half hour, for which I was not charged.  I asked him tons of questions and he told me his way of dealing with patients. “My patient’s wishes always come first,” he said. I didn’t need to hear much more. It’s pretty hard not to love a doctor who says that.

He was maybe 5’7″ with a neatly trimmed grey beard and when he walked into a  room, his bearing absolutely commanded respect. He was sarcastic, very sharp, great at his job, wise, and really funny. My favorite memory of him was on a busy day in his office. I’d waited more than an hour for my check up, and when he finally bolted through the door, he slammed it shut, leaned heavily against it pretending to be winded and said, “Oh my God, I must have seen every vagina on the west side today, I’m exhausted!”

I loved him, and I have a theory about doctors: Most people who become doctors are all pretty smart. But they don’t all have great personalities. I always choose my doctors based on ability AND personality because if I ever do have a life threatening illness, I want someone whose company I actually enjoy to help me through it.

My son, Miracle #1, minutes after he was born.

When my son was being born, there was a lot of hurry up and wait going on, so Dr. Tisherman sat with us, telling jokes, and listening to our Little Richard music. (Yes, we played Little Richard when I was in labor — which the people in the next room did not appreciate.) He patiently waited with us, calmly got me through all the pushing and breathing, and gently took  care of me afterward — always good humored — with my best interest at heart.

When I went into labor with my daughter on Good Friday, he was called away from a Seder dinner with family. He bolted through the door of our room and dramatically said, “Holy shit, I had to leave a Seder dinner because of you!” I laughed as much as a woman having contractions can, then he came to me very gently and asked me about the pain.

My daughter, Miracle #2, minutes after she was born.

I kept saying, “Please don’t tell me I’m too far along to have an epidural!.” And even though I was almost ready to deliver, he strode up to the anesthesiologist and told him in no uncertain terms to take care of my pain, which he did.

(If you believe in natural childbirth more power to you. I don’t judge. But I can honestly say I had a great time giving birth both times, which isn’t something you hear very often. Thank you Dr. John Bonica, who invented the epidural in the 1930’s for his pregnant wife.  Now that’s love.)

Next, Dr. Tisherman told my then husband to only place the camera where I said it was OK. He said, “If you don’t put it where she wants it, I will personally remove the camera,” and I know he would have. My wishes were what mattered.

And that’s what stays with me. I’ve always been one of  those women who lets other people’s wishes come first, but in that delivery room, it was me who counted. Dr Tisherman always made me feel unbelievably special, and that didn’t dawn on me until I started writing this today. I am sure that’s why I feel his loss so deeply.  There are very few people in my life who’ve ever made me feel that way.

I wanted to write a tribute to him and let the world know how much I appreciated him, not just for being a highly skilled professional, with a fantastic personality, who flawlessly delivered my two children.  I wanted to say thank you for making me feel so very important when I was in your presence. God bless you Dr. Sanford Tisherman.

Attitude is the Epicenter — Everything Streams From It

“Guilt is a Handy Tool” -the Chisel Bird, and Delicious Garlic Bread