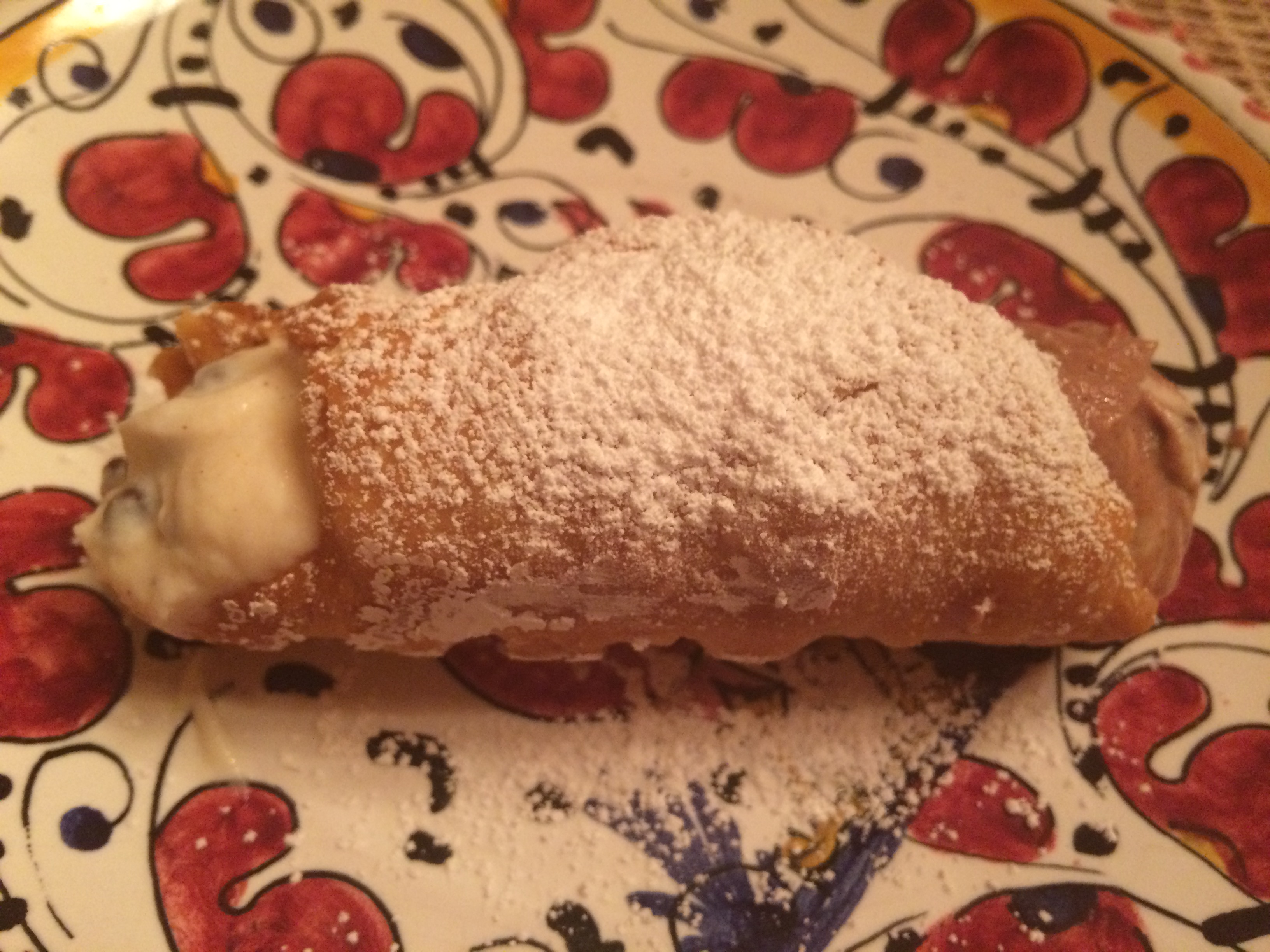 My mother visited me last night.  Well, maybe not physically, but she was definitely here, because I went back to being a 9-year-old tasting her homemade cannoli at Christmas time in our flour covered kitchen.

(This was a post from several years ago, but since the holidays are hovering closer, I thought it might be good to resurrect this recipe.)

I am a very novice cannoli maker and was spurred into a cannoli frenzy because I promised my friend Debra I’d bring them to an Italian dinner.  I’d only made cannoli shells one time before and didn’t quite have the hang of it. That was four years ago,  but I tried again last night.

I love the fact that her recipe is written on a notepad from my brother Bernie’s Insurance company.

It was a challenge because I had two recipes. One I’d written down myself, probably with input from Angelina Belculfine, my mom’s best friend and the most amazing baker. The other one was in my mom’s handwriting. I actually have it framed on my dining room wall because it’s a classic. Mom was adorable, but not terribly accurate, so I wasn’t sure whether her teaspoon meant tablespoon, etc.  But I mostly trusted her and just went for it.

I wasn’t going to eat a cannoli because I’m not getting any thinner, but how could I bring them tomorrow without knowing how they’d taste? Clearly, that wouldn’t do, so I filled the smallest one, and dusted it with powdered sugar.

I’m certain mom was beaming because it tasted just like hers.  I ran upstairs and made my son try it and he thought it was pretty awesome too.  So, once again, through food, I was teleported to 1965 and very happy to be in my mom’s New Brighton kitchen with powdered sugar all over me.

If you’d like to be teleported to 1965, below is her recipe. Mom loved making them with half chocolate filling and half vanilla because her favorites were from a store called Caputo’s, or possibly Cabuto’s (with Mom’s accent you could never be sure). I think she said it was in Pittsburgh, but I can’t find any store with that name now. However, I was able to find a recipe for cannoli filling from a website called CaputoBrothersCreamery.com.

They make their own shells, which is why they’re not giving the recipe. I like Mom’s shell recipe because they’re a little lighter than the ones you find in stores or online, and they have a touch of wine in them, which gives them a wonderful flavor.

3/4 to 1 tsp. salt (this was one I wasn’t sure of. She’d written 1 tablespoon, but I think she messed up the writing so I erred on the side of caution)

Mix together the flour, sugar, and salt. Once combined, add the Crisco, mixing it with your fingers. Once it’s pebbly, like pie dough add the eggs and wine.  Mix well with your hands until combined. Wrap dough in plastic so it doesn’t dry out.

In a large skillet or deep fryer, pour about 40 oz of canola oil. Heat it to 375 degrees.

Lightly grease the outside of 6 metal cannoli tubes.

While the oil is heating, roll out the dough to pie crust thickness, or slightly thinner, about 1/8 inch. With a rolling cookie cutter, cut a circle in the dough about six inches in diameter. Wrap it around the cannoli tube and where it overlaps, rub some of the beaten egg to seal the cannoli shell together. (I just sat the tube on the dough and rolled around it, eyeballing how much dough I would need. It doesn’t need to overlap too much — that was my mistake with the first several I fried.

Then carefully place the covered tube into the hot grease. Let it fry for about 3 to five minutes or until it’s golden brown. Carefully remove it from the pan. You can cook a few at once, but I didn’t do more than three, so I could keep an eye on them.   Once the tubes have cooled enough to touch, gently remove the metal cylinders, grease their outsides and make more cannoli until the dough is all used up.

(My mom used Citron in hers, but I’m not a fan, so I don’t. You Cannoli purists  should feel free to chop a little up and put it in if you like it.)

For the White filling

1 32 oz container of Galbani Ricotta (This is the absolute best for cannoli. It’s smooth and not gritty!)

2 to 3 good sprinkles of cinnamon

With an electric mixer, whip together the ricotta, the powdered sugar and cinnamon. When it it mixed and nice and creamy, stop whipping and add the mini chocolate chips and (optional citron). Then separate the filling into 2 parts. Use 1/2 to make the chocolate filling.

For the Chocolate Filling

1/2 of the white filling

Optional 1 to 2 tsp. tsp finely chopped citron (I was never a fan of this, so I don’t use it in mine.)

Melt the chocolate chips in the microwave or on the stovetop and and add the whipping cream. Mix together until smooth, then blend it into the 1/2 white filling.

Now comes the fun part. Find 2 clean plastic Ziplock bags. (Or, if you’re advanced, use your pastry bags.) Fill one with chocolate filling and one with vanilla. Snip off one end of the plastic bags and use them to  Squirt the ricotta filling into separate ends of the cannoli.  Sprinkle with powdered sugar and serve. Do not fill until ready to serve because they get soggy.

If you like, you can dip the ends into chocolate chips or pistachios, but I like them plain.  Enjoy!

But be sure to change your shoes before you bake, I didn’t and now mine are a floured mess – just like Mom’s always were!

I Spent the Evening with Sir David Attenborough…

Better Than Any Other Tiramisu!