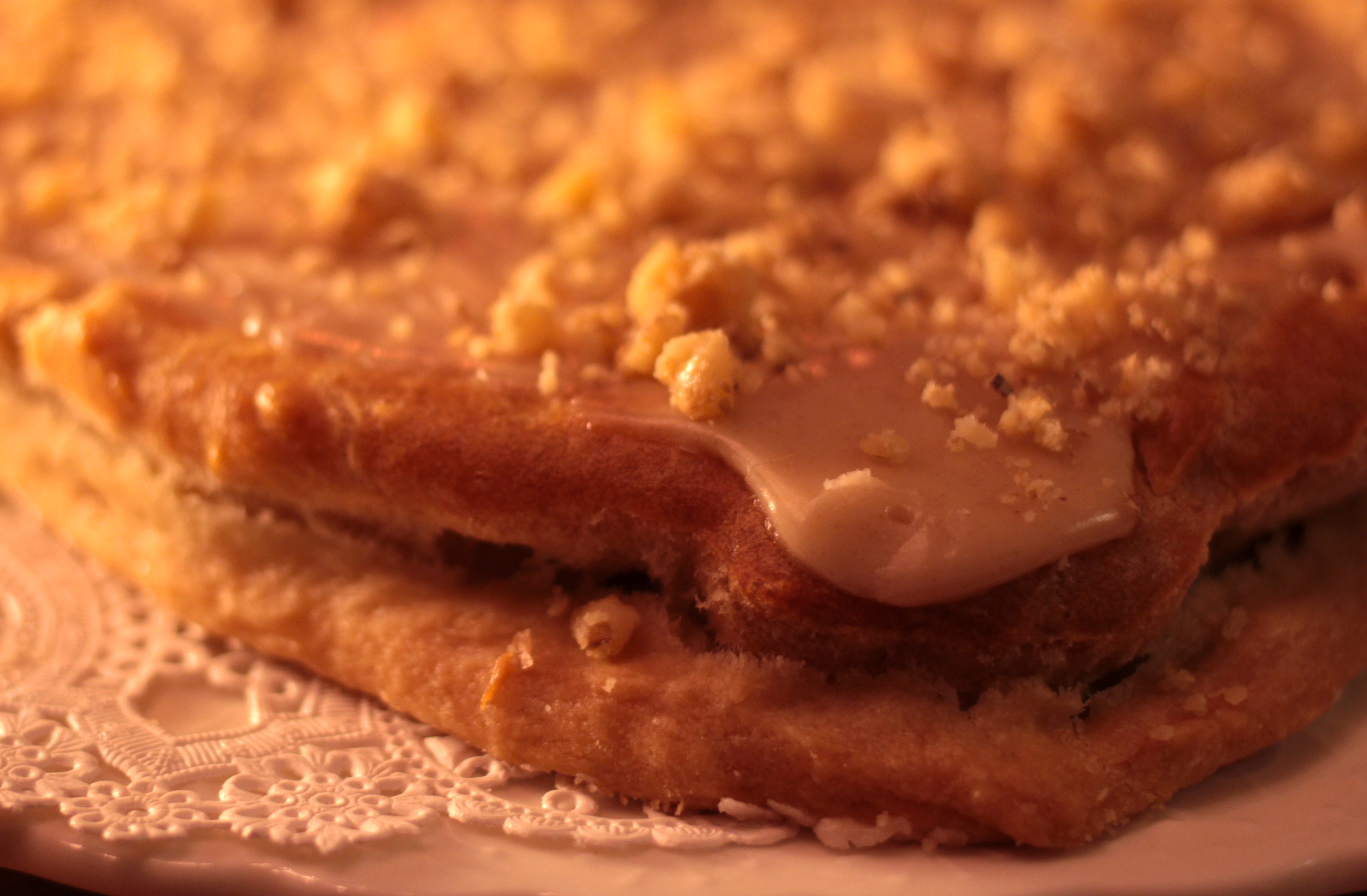 On this day back in 1974, my college friends and I decided we were sick of seeing lucky girls getting roses delivered to them willy-nilly, while we got nothing. So we held a Valentine’s Day Sleep-A-Thon.

My friend and resident artist, Dawn created fabulous posters for our doors that said anyone could participate, in the VD Sleep-a- Thon.  All you had to do was sleep through the day so you didn’t have to witness the floral onslaught. Only problem was, we had to miss class to participate, and we were good girls, so it never quite took hold the way we imagined.

Now, that I’m older, still alone, but much wiser, instead of coveting someone else’s roses, I go buy myself flowers and chocolate. Why wait for something I’m perfectly capable of buying myself?

In fact, now I celebrate Valentine’s Day with abandon. I even bake for it, and one of my favorite things to make is a Danish Pastry Puff. I usually make it as a breakfast or brunch item.

It’s a buttery pastry crust topped with another layer that’s almost like a cream puff in texture but flavored with almond extract, then covered in icing and sprinkled with almonds.

It’s an easy recipe I got from my brother, Bernie, who had a food column years ago called Top Fork.  He used to go around sampling food at different restaurants then write about it.

(It’s a sickness — Tunno’s can’t help it, we’re always either eating, cooking , or talking about food.)

saved his clipping from all those years ago and every time I make a Danish Pastry Puff, I use it. It’s easy, buttery  deliciousness!

Here’s the original recipe for Danish Puffs, handed down via my brother, who got it from his ex-neighbor Martha May, who got it from her eighth grade Home Economics teacher, Wealthie Crawford, who entered it in a national bake-off and won a prize.  I love how recipes make the rounds. And let’s hear it for one nationality embracing the food of another.  It’s what makes the United States so totally cool. I swear food is the true route to world peace.

I tried a variation on it with Brown Butter Frosting and it was very good, but I like the almond too. Usually Puffs take the form of rectangles, but for Valentine’s Day you can shape them like hearts.  Enjoy them and have a Happy Valentine’s Day whether you’re alone or a couple!

Mix together ingredients and spread into two rectangles (or hearts) on an ungreased cookie sheet.

Put 1/2 cup butter and 1 cup of water in a medium size sauce pan and bring it to a boil. Add 1 tsp. of almond extract and 1 tsp. vanilla. Then remove from heat and add 1 cup flour immediately. Beat by hand until smooth, then beat in three eggs, one at a time until smooth. Spread on top of crusts and back at 350 degrees for 45 to 60 minutes or until golden brown. Let cool.

2 Tbsp. half and half

Melt the butter and add the powdered sugar. Add the vanilla, the half and half, and salt, to taste. Pour over the cooled puff and sprinkle with nuts. You can use sliced almonds or chopped walnuts.

Brown Butter Frosting (You will see God when you taste this)

Melt butter over low heat in a saucepan until melted. Continue stirring until butter turns a golden to medium brown. Be careful not to burn it. It should smell wonderfully fragrant. Once browned, remove it from the heat and add the powdered sugar and half and half, stirring with the whisk until smooth. Then drizzle over the cooled puff and sprinkle with chopped walnuts.