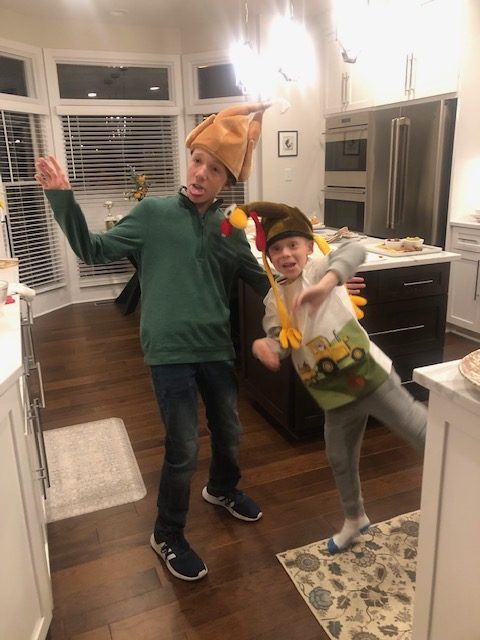 NATE! And ALESSANDRO, my two great-nephews.

I keep telling myself this does not mean I’ve lost my touch. Just because Nate is 13 and Alessandro is only six merely means that Tunnos are extremely competitive cooks/bakers. It also means, my nephew, Chris and I will have to keep trying.

Plus, there was a snafu this year. Two of the same pies were accidentally entered by Bob. In all the prep for Thanksgiving, and with all the pies in the same cooler, the extra pie he made with the leftover pumpkin got entered. .

No one realized that two of the pies were the same because they’re all in similar glass dishes and, after you’ve had your first three tastes of pumpkin pie, they all start tasting the same…to me anyway. Even Bob didn’t recognize the second one was his, until we were cleaning up after the votes were cast. This year, all the pies were good, even Bernie’s pie that looked like it escaped from a burn ward.

In preparing for the Cutthroat, I was doing some research into the best temperature to bake a pie crust, and the wisdom on that keeps changing as well. Dammit, I wish people would just make up their minds!

The recommendation has been that you bake at a high temp for 15 minutes then turn the heat to 350. But recently I read an article that said that pre-baking all pie crusts, even filled ones at a lower temperature is the best way. So, I’ll probably be making changes to my pie recipes…again. Here is the article from the New York Times, The Case for Baking Pastry Shells ‘Blind,’ At Low Heat.

Honestly, I couldn’t have been happier to pass the trophy on to Nate. Even though the words, kind and teenager, are seldom spoken in the same breath, Nate is the kindest teenager I have ever had the pleasure of knowing. He is funny, easy-going, brilliant, a great pumpkin pie baker, and fiercely competitive. I’ve seen him run races and his grit is a sight to behold.

And let me not forget Alessandro, my other great-nephew, who is six-years-old and won the Children’s Trophy. He’s been cooking with his dad, Patrick since he was able to hold a spatula. The kid is fearless and a remarkable cook. He not only watches everything his dad does in the kitchen, but has been an active participant since he was a toddler. He’s probably storing it in his brain for the day he wins on Iron Chef.

In retrospect, my big mistake was the nutmeg. I am changing my pumpkin pie recipe back to one without nutmeg. It can be a bit overpowering, even in small doses. If you do use it, just use a tiny pinch. It works in my pumpkin cake with butterscotch frosting, but 1/2 tsp. was too much in pumpkin pie.

So, c’est la vie. You can’t win ’em all. l am sorry this took so long, but holidays, baking, decorating, and just the thought of Christmas cards has kept me hopping. If you have a favorite pumpkin pie recipe, please pass it on to me. Clearly, I can use the help!

And please, if you haven’t signed up to follow my blog yet, what are you waiting for? Tell your friends too!

Does Canning Scare the Crap Out of You?

Is Contentment Possible in 2023?