Biscotti That May Get You Blacklisted 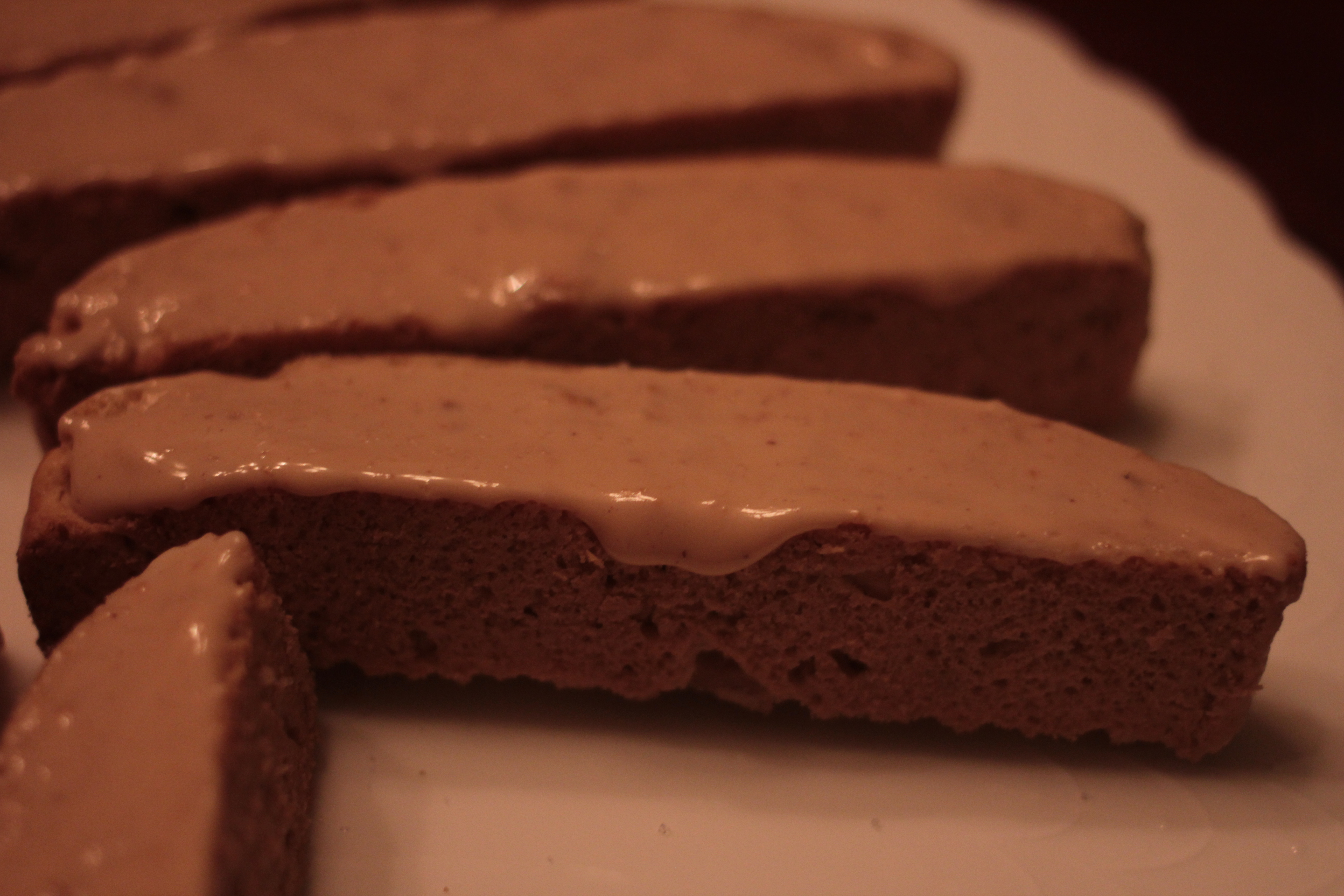 If you have an Italian grandmother who bakes biscotti, you should probably stop reading right now. Once you have this recipe, don’t blame me if she turns on you, and don’t say I didn’t warn you.

OK, my conscience is clear.

I started baking biscotti more than 20 years ago. I was never really a fan of them when I was young because they were always the same; Anise flavored, plain and dry. Any cookie that had to be dunked to be eaten was, to me, not a cookie worth the calories.

But years ago, I was at my friend, Jean’s house and tasted her biscotti, which were really good and different.  I don’t remember what kind they were but I must have really liked them because I asked for the recipe, which I then turned into my own, with a tweak here and there.

I am now a certified biscotti maniac. The maniacal baker in me was encouraged by my father.  After my divorce, I lived with him for two years.  He regularly polished off two or three biscotti a morning. When none were left, he’d shame me by going to the store and buying Stella D’ oro Anisette Toast.  He’d say, “Well, there weren’t any left, and you didn’t bake any, what was I supposed to do?” As if he would starve to death if there were no biscotti to eat with his oatmeal.

He mastered this technique after 52 years with my mother. Like my mom, I’d immediately whip out the mixing bowl because, who wants to be outdone by Stella ‘D oro?

Once I realized how easy and ridiculously versatile they are, I started thinking about different versions of biscotti.  Just like my mom, I can never leave a good recipe alone. She tried chocolate chips in almost everything, and created a blueberry pie with peanut butter crust you would trample your offspring to reach.  Here is a link to the post where I share that recipe: Pies and Virginity.  Only my mom could combine the two.)

But back to biscotti. I started with the basic recipe, which looks like it came from Sunset Magazine. ( It looks like it’s gone through a war, but that happens when you use a recipe as much as I’ve used this one.) Jean tweaked it and put in the bread flour, but I never use bread flour because I’m lazier than Jean.

Then I tweaked it.  I left out the baking soda and the orange and lemon rind and started experimenting.  I have nothing against orange or lemon rind, but all I got when I was a kid with an Italian mom, was cookies with anise, and orange and lemon rind.  I actually like the combo, but not in every cookie.

So, the first cookie I tried was anise with vanilla flavoring and almonds; it was good.  Then I tried it with macadamia nuts and it was even better. Then I put white chocolate on the outside and it reached perfection.

Next I tried it with cranberries, almond extract, chopped almonds and white chocolate. Then I thought, what about hazelnuts and cinnamon, with white chocolate on the outside and just a drizzle of chocolate?  (Americans will always take something that’s European and healthy and weigh it down with sugar because dammit, that’s who we are.)  People loved it.

Then I tried pumpkin spice with walnuts and it became my favorite. Next was lemon with lemon-flavored  white chocolate and it got even better reviews. As I sit here, I’m thinking, Hey, orange biscotti would be good! Last night I tried salted peanut because,  well everyone’s salting everything anymore, so I wondered if that would be good.  It was really good.

The only downside to these biscotti is that if you have an Italian grandmother, she will hate you because yours will be better than hers. She’ll probably start excluding you from family gatherings or you’ll find her rooting through your kitchen one day, trying to steal your recipe.

My mom once pointed a paring knife at me when we were both cooking pasta sauce, and forced me to put everything in hers I was putting in mine. Here’s a link to that post, called Six Simple Words That Can End Your Life.  I don’t think she would have disemboweled me, but you never know.  It’s a good rule of thumb to never mess with Italian women in the kitchen.

So, here’s the newly tweaked peanut recipe with all the possible alternatives listed below. Try your own twist on them.  My nephew Patrick, also a maniacal cook, tried them with pistachios and loved them.  Just stay away from Grandma in the kitchen after this. She can’t be trusted.

(You will sound very multicultural if you know this — in Italian, biscotti is the word you use for more than one cookie, but biscotto is what you say when you refer to only one. Go ahead, impress the people at Starbucks with this.)

4. Sift together the flour, baking powder and salt and stir into the batter. The dough should come together in one big ball that’s easy to work with.   If it’s too sticky, add just a little more flour, if too dry add just a little water.

6. Lay each roll on a cookie sheet. (Flat ones with no edges are great for cutting the cookies when they’re baked.) Flatten the rolls so they’re about 4 to five inches wide, and round out the edges.

7. Brush the top of the flattened rolls with the egg yolk mixture (it gives them a nice sheen). Bake at 350 for 20 minutes until lightly browned.

8. Remove from the oven, slide spatula under flattened rolls to separate them from the cookie sheet, and cut each roll into 1″ slices.  Then lay each biscotto cut side down on the baking sheet and return to the oven.  Lower the heat to 325 and bake for 15 minutes more.

Place the white chocolate chips in a microwave safe bowl and microwave on 50 % power at one minute intervals until melted, usually two to three minutes is long enough. Just start stirring them and they will melt.  Once the white chocolate is melted, just add the peanut butter and stir until incorporated. Then spread it on the cooled biscotti. If you want, you can leave them as is and sprinkle some sea salt on the spread side, or take the spread side and dip it in the chopped salted peanuts.  I always dip my in the chopped nuts and they rock.  You could spread chocolate on them and dip them in nuts too, since pairing chocolate and peanuts is pretty much always awesome.

Follow recipe for Peanut Biscotti. Add 2 tsp cinnamon, 1 tsp ginger and 1/4 to 1/2 tsp of cloves to flour mixture and mix thoroughly. Substitute 1 cup chopped walnuts instead of peanuts.  For icing, melt white chocolate chips, sprinkle a little cinnamon in it,  and spread the melted mixture on cooled biscotti. No sea salt should be sprinkled on these after icing.

Mom, Fitting In and Food