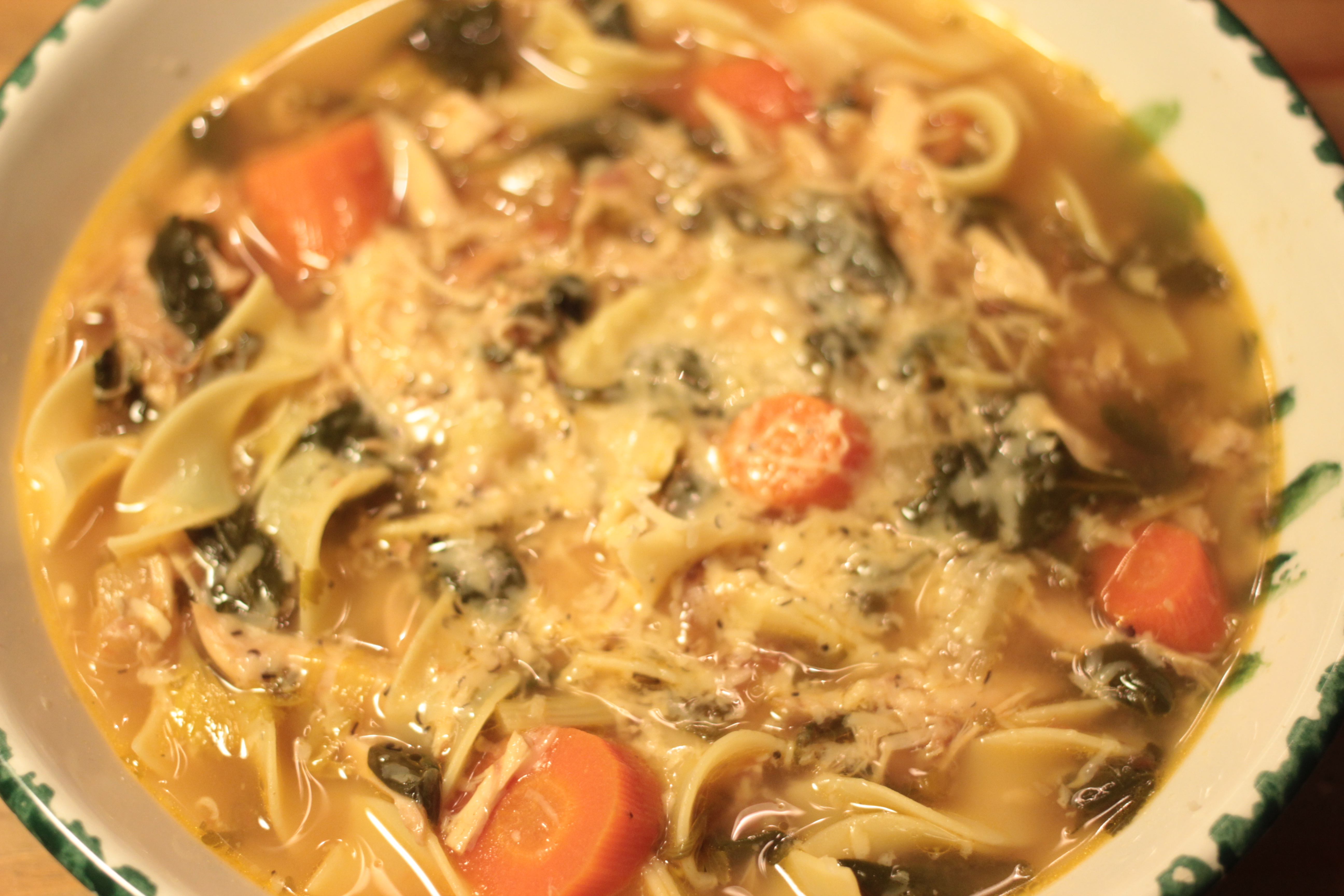 Since this is flu season and you’re probably suffering through a pretty crappy winter, I wanted to post my mom’s chicken soup recipe. If you’re sick and miserable, at least you’ll be sick, miserable and well fed.

But I can’t give you this recipe without the story that goes with it about my mom.  (As you may have guessed, I have many stories about mom, so stick around.) If you’re able to read this story and not laugh, you should probably go to the hospital; you’re dying. As for the rest of you, reading this story will give you a profound appreciation for your parents’ grammar.

My mother was a simple woman who had a theory. There were only two remedies for sickness:

She stood firmly by her belief, ready to either fill you with, or empty you of food, at a moment’s notice.  My oldest brother, Bernie, was the first victim of her laxative theory.

Bernie said he hadn’t studied for a test one day when he was in 5th grade, so he told Mom he was sick.  Her predictable diagnosis was constipation, but that didn’t rule out going to school.  None of us could miss school unless we were actually dead.

Mom gave Bernie some Ex-Lax, but told him it was chocolate that would make him feel better.  Bernie knew what Ex-Lax was and was afraid he either wouldn’t make it to the bathroom on time, or could possibly blow out St. Cecelia Elementary’s septic system.

He said, “Ma, I can’t just run to the bathroom when I want!”  She responded, “Donda worry Benard, I wride a note anna you canna go wenna you have to — OK honey?”  Deviously, Bernie figured this wasn’t bad.  He could “have to go” in the middle of the test and look up the answers in his hidden notes!  However, karma had something else in mind.

So, he gave the note to Sister DeLourdes and went back to his seat, watching to see if it worked.  Bernie says she started to smile, chuckle, then snort, turn red and giggle.  She told the class to study for the test as she scampered out the door.

Bernie was very suspicious.  He looked out the door and saw Sister chuckling with some other nuns, so he ran up to see what Mom had written.  Here’s what he remembers:

Pleaz xcuz my lilla Bernard today iffa he gatta go to da batroom real quik to take a shit! I gave hem a fizik and he codda have to shit at any time. He’s a gooda boy.

This vaporizes any complaint you ever had about your parents.

He said he was dying of embarrassment, but heard the rattle of rosary beads signaling a nun was coming, so he ran back to his seat.  Sister came back for the note and shoved it deep in pocket of her habit. Bernie says he heard more cackling in the hallway from the other nuns.

We can only assume Sister DeLourdes saved Mom’s masterpiece for nun show-and-tell back at the convent.  After that, he never let her write another note.  They made a deal —  he wrote them, she signed them.

Since filling someone with food was much more in line with Mom’s “Eat a lilla summa ting, it’ll magga you feel a better” philosophy, she’d begin cooking at the first sign of illness.

“Honey, I’mma gonna maaga a you somma chaagen a souppa, you feella better inna no time a,” she’d say.  Twenty minutes later, the delicate aroma of chicken and vegetables enveloped every corner of the house, and in little more than an hour, the soup was done.   I remember dragging myself to the dining room table and letting the steam from the hot soup caress my face before I tasted my first perfectly salted spoonful.  Even now when I taste it, it’s like she’s standing right beside me.  Chicken soup was part one of my mother’s holy trinity of potent medicines.

Part two was a cup of hot tea with lemon, honey and Rock and Rye.

Rock and Rye is rye whiskey sweetened with rock candy.   It has sliced fruit and cherries in the bottle as a consolation prize when you finish the booze.   It’s sweet enough to rot your teeth, but you’re so relaxed you don’t care. I’m sure other 1960s moms would have been horrified at the thought of spiking their kid’s tea. But Rock and Rye helped me begin to see clear advantages to being my mother’s child.

Jacquin’s was my mother’s favorite brand.  I just looked online and discovered that Jacquin’s has facebook pages dedicated to its other liqueurs, but not one for Rock and Rye.  This is an affront to my childhood memories and I’m going to bug them until they put a page up for Rock and Rye.

Vicks, the small blue bottle that terrorized all the Tunno children.

Rock and Rye almost made up for part three of her holy trinity; the eight pounds of Vicks VapoRub she insisted on rubbing all over my chest and back on sick days.  She’d say, “Frenzy, you gonna feela better inna no time.” I’d lay there, slathered in menthol, not daring to move, knowing I was so greased up, one twitch could have launched me into the next room.

Carcass of rotisserie chicken with substantial meat left on

1 clove of garlic sliced in quarters

(Optional) 1/2 cup pureed tomato sauce or 1 fresh tomato peeled, seeded and pureed I use Progresso or DeCecco Peeled tomatoes with basil (I remove the seeds and puree them.)

Put the chicken and water in a large pot and add the celery, parsley, garlic, onion, and carrots and bring to a boil. Skim off the foam (if there is any).    Lower temperature and let soup simmer until chicken is cooked or meat is falling from the bone.  Remove meat from the pot, remove the bone and return meat to soup mixture. Add the tomato sauce. Then add 2 cups of noodles and simmer until noodles are cooked. You may also take liberties and add my favorite ingredient; sautéed chopped spinach with garlic (but that wasn’t in my mom’s original soup recipe).  The grated cheese on top is really yummy!