The Real Truth about Sex and Love – A Groundhog Day Story 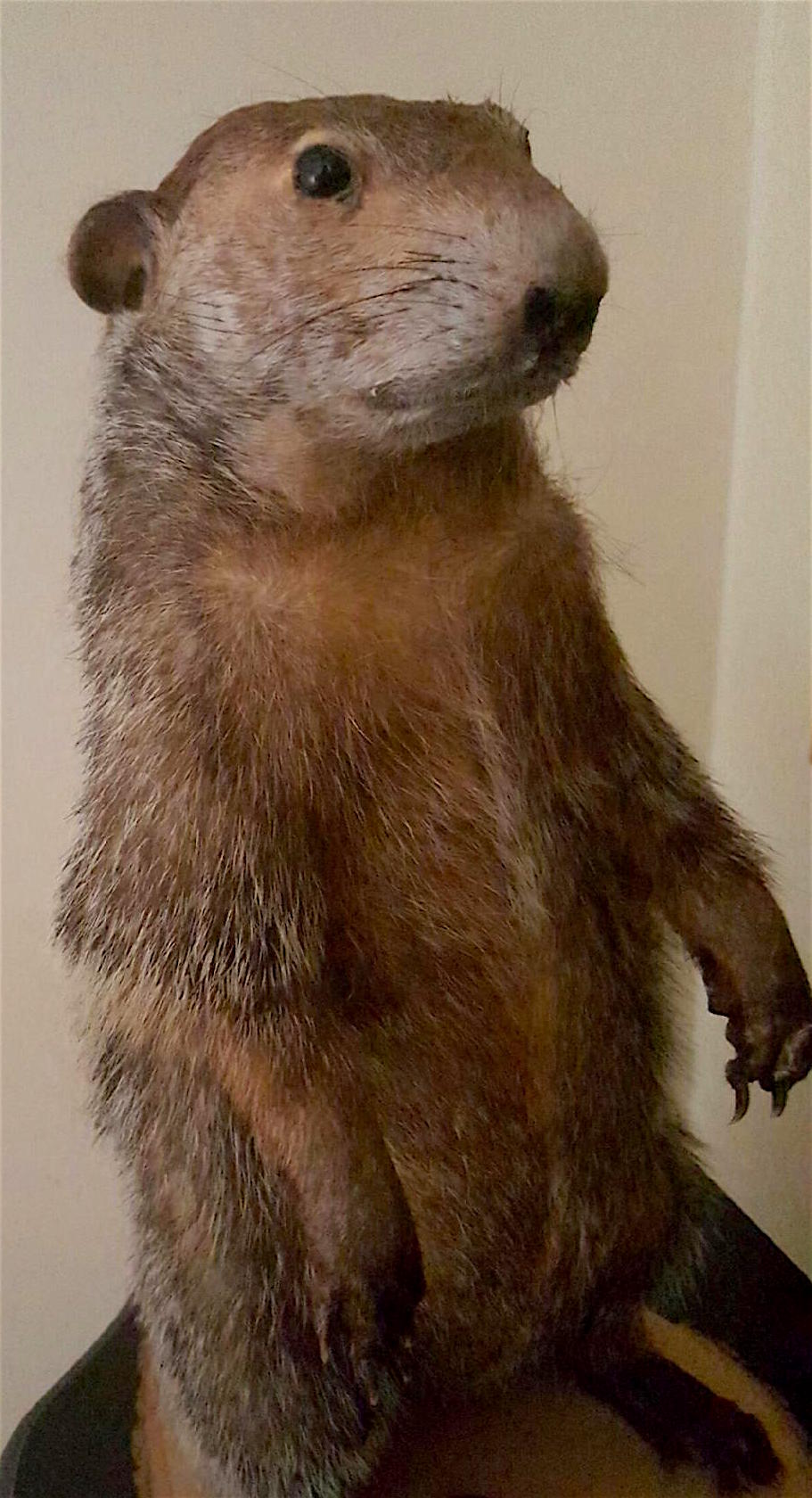 Groundhog Day and sex  are not a natural pairing in anyone’s mind, except mine. This story starts with my sex education, which can be summed up in six words: “DON’T EVER LET ANYONE TOUCH YOU!”

I never got a sweet book explaining the birds and bees, or a little pink kit with everything I would need to become a woman.

From the time I was about five years old, all I remember my Italian mom saying, very emphatically, was “DON’D A AVER LET A ANYONE A TOUCH A YOU!”

It was the early ’60s — things were different then. A girl had her reputation to worry about. Nice girls didn’t, bad girls did, period. (Just watch the movie, A Summer Place, if you don’t believe me.) My mom knew she’d only have my childhood years to convince me men were lechers, who’d be all over me any minute. Once I hit puberty, she figured all bets were off.

I hoped my perky flip would distract people from the teeth.

I understood her concern, I had some cute moments from three to six, so abduction was possible. But once those permanent teeth came in I looked in the mirror and figured boys weren’t going to be a problem.

Then I hit nine and discovered my fully developed Roman nose, which went really well with my new beaver teeth and wondered if I’d ever get anyone to talk to me, let alone touch me.

Thoughts of sex never even occurred to me, until I was sitting on my parent’s bed talking with my sister about having babies. She asked me if I wanted to have kids someday. I unwittingly said yes, to which she replied, “EEEEEEEUUUUUUU! DON’T YOU KNOW WHERE THEY COME FROM?”

I snapped, “Yeah, I know, they come from — your stomach.” Then she said, “Yeah, but do you know how they come out?” To be honest, I hadn’t given it much thought, and responded, “Well, don’t they cut open your stomach or something?”

My sister now, who says she doesn’t remember shattering my young world.

Relishing her moment of superiority, my sister said, “No, they come out of another place, THINK ABOUT IT.” Then she sashayed off, as only an older sister can do. I stood there, thought about it a moment, and responded, “EEEEEEEUUUUUUU, NO SIR!” And this was before I ever wondered how babies got in there in the first place, but I was pretty sure it involved some touching.

Once I stopped envisioning me popping out of my mother’s private parts, the shock wore off. At the time, my concern was my teeth and nose. I hoped, if I got braces no one would notice my nose, then I too, could have a normal adolescence where I could learn more about this touching thing. I begged for braces so I wouldn’t look like an Italian rodent, and my dad caved in.

The braces came off at sixteen and, although I never had a microscopic Barbie doll nose, I was OK with make up and a blow dryer standing by. I thought I was set.

Then I began the long wait for the right boy. My mother had a speech she gave when I complained about why some boys were such jerks. She delivered it with such passion, I believed it was the truth about sex and love:

“Da boyz, wen a you’re a young a gal, alla dey wanna do issa fool a round a. But a somma day when you get a lilla bait older, dey gonna start a lookkin a for a niza gal, and dey will a peekka you cause a you’re a good a dezent gal. You don’d a gatta geeve a dem nading bekozza who loves a you comes after you. You’re a gooda gal. Dey don’t wand a puttana.” (Puttana, as you may recall,  is the Italian word for whore.)

It was my mom’s Italian twist on Carole King’s, “One Fine Day,” which featured empowering lyrics like, “Though I know, you’re the kind of boy, who only wants to run around. I’ll be waiting and someday darling, you’ll come to me when you want to settle down – OH!”

Mom’s speech worked wonders through junior high, high school, and even college. But somewhere in my early twenties, I began to have my doubts. (Don’t mock me, I was raised Catholic and, as Billy Joel wisely said, “You Catholic girls start much too late.”)

I started to suspect mom was wrong when I saw adventurous girls always getting boyfriends, while I spent a lot of time home with my virginity.

There was no such speech for my brothers. She’d look at them and chuckle, “Aaaay, be careful gigolo,” as they were leaving the house. I imagined the truth was somewhere between the two extremes and I navigated it as best I could.

I believe I held the title, “Oldest Living, College-Educated Virgin East of the Mississippi – for maybe five years – an impressive feat in the ‘70s and early ‘80s. I should have charged admission so people could file past in awe to see what an actual virgin looked like.

By 25, my virginity became an albatross. I couldn’t wait to get rid of it, yet there were no takers among the non-drug addicted, upwardly mobile, single men I was attracted to. Men, who happily dated me, were wary once they knew, and one guy actually dumped me because of it.

Tap-dancing around the truth was much easier than coming clean with male acquaintances. Female friends were incredulous. They’d say, “Really…still?” Then they’d look at me amazed and tell me about their first time at fourteen, sixteen, or eighteen in their living room or the back seat of some car.

I got a lot of grief, usually from guys I wasn’t attracted to, who couldn’t believe I was in my 20s and not sleeping with everyone. They’d continually ask if I was a lesbian, as though anyone who wouldn’t have sex with them must be a lesbian. They are the very men who make straight women want to be lesbians.

Since I’d held onto my virginity as long as I did, I wasn’t about to just toss it out, like a used tea bag, without giving it serious consideration.

I decided that when the time came,  it would be nice if it was a man I was attracted to, in love with, and who I could conceivably consider marrying. As time wore on I gave up on the marriage part, and could only hope for the love part, but dammit, I was not giving up on the attraction!

I finally found someone I thought was cute, whose company I actually enjoyed, who seemed to enjoy me. I almost convinced myself it was love, until I really got to know him. He was a tall, blonde, blue-eyed cad with dimples, who I found out was seeing someone else while he was seeing me. What a bummer to wait all that time, only to discover you’ve just shared it with a creep, but that’s what you get when you’re in a hurry.

My friend Carolyn’s taxidermied groundhog, Gregory thinks the fuss over virginity is silly too.

The upside to the story is that my virginity was roused from it’s burrow and scampered away on Groundhog day, which I thought was nicely metaphorical. I’ve never missed it once. All I can say about the whole virginity thing is, losing your virginity is a natural process in life. Why make it such a big deal for women when it’s no big deal for men? Who says a woman’s worth should be based on nothing more than a flimsy piece of tissue?

My mom did not concur. She wanted me to be a virgin until death, if I wasn’t married, which seems like a waste of perfectly good body parts.

She hung onto her fantasy about my virtue until I married. The day after the wedding, she kept asking me pointedly, “How are you?” I cluelessly replied, “I’m fine, why?”

Then I heard a very loud, “OH, SO YOU LIKED ITTA HUH?”

It took me a beat to realize what she was asking, then I laughed and said. “Yeah, it was fun, OK?” To which she laughingly replied, “Hmmmh, attsa pooty good!”

But one night, in my thirties the truth about sex finally came out, over a hot  cup of tea at the dining room table. The news was on in the living room and they were talking about Madonna.

“I can’d a standda datta Madonna,” she spat out the words. “Ha dare a she take a da Blessed Moder’s name when a she’s a nading but a puttana. She stings (stinks)!”

“Yeah, but men love her, men love puttanas,” I said definitively. She shot a shocked look across the table at me and said, “Oh yeah? Ha do you know?”

I said, “Ma, trust me, they do.” Then her gaze sort of drifted away and in a defeated tone she said, “Yeah, I know. Why you ting a dey lige a dem?”

I fired her words back, “Why you ting a dey lige a dem? Ma, I think we both know why they like them, but I can’t believe all these years you told me men would love me because I was a “niza gal,” and now you’re telling me you knew all along how it really was?”

Then she stunned me with this, “Well a honey, whad else a was I gonna say?”

I was disappointed that she didn’t believe most of what she said. But what I thought, wasn’t true either. It’s not just sex that makes a man pursue a woman (although I’ve never seen a case of it turning them away).

But this part is true; “Who loves you, comes after you.”  You can be a virgin or the town trollop, and if someone loves you, he or she is going to seek you out, no matter what.

That’s the real truth about sex and love.

P.S. You may have noticed that I’m now posting my blogs as an audio file, so if you don’t have time to read, you can listen instead.  Please let me know what you think!  (I’m going to try and go back and record the older ones too, but this will take a while!) And please share my blog posts. If you enjoy them, maybe your friends will too! Thanks for reading!

Be the Best Example You Can Be