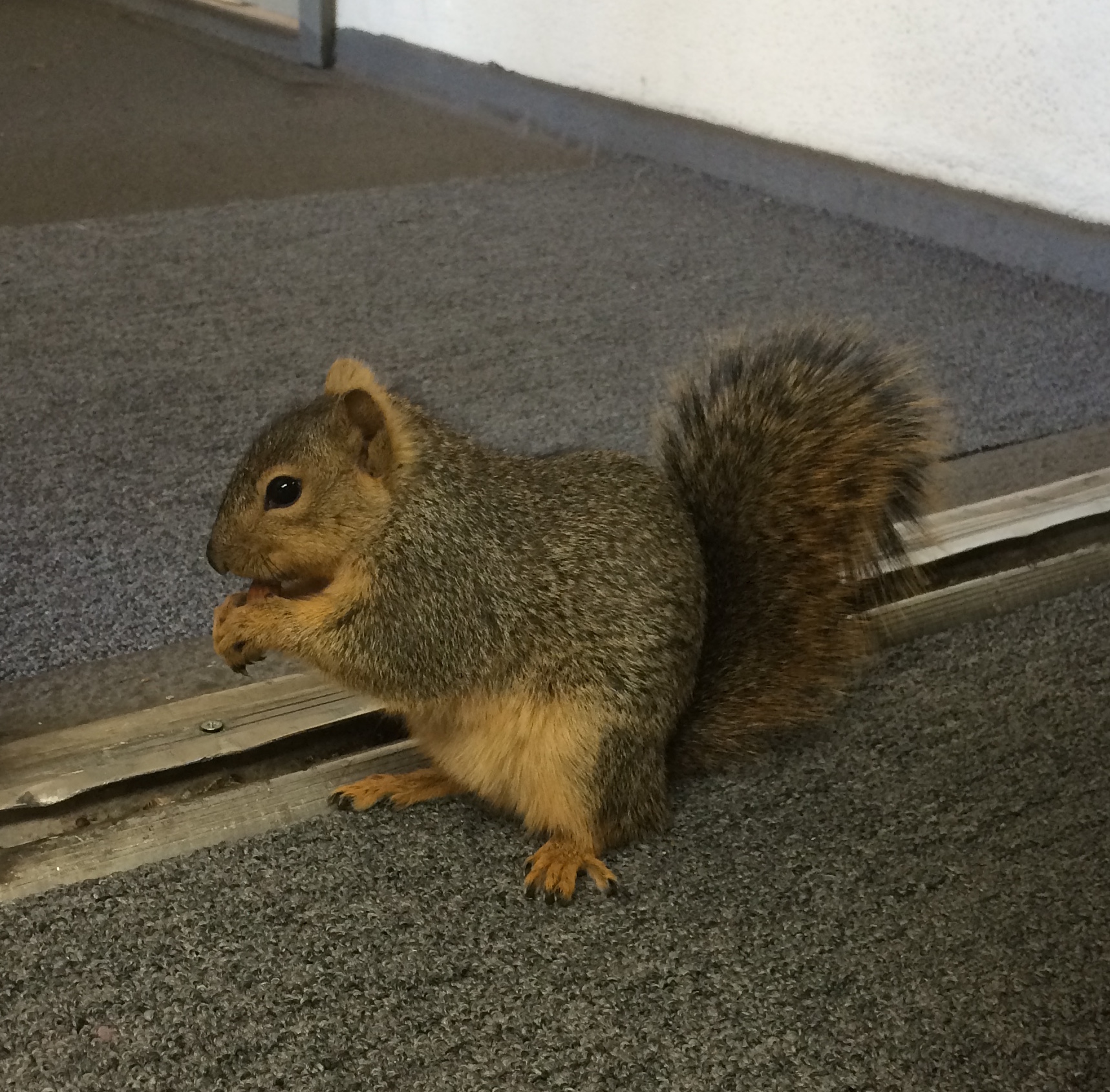 I very rarely talk politics. Least of all with family because I know better. I’m one of the few Democrats in a sea of Republicans. I tried talking politics with my loved ones once and it wasn’t great for family harmony. I’ll discuss politics with like-minded individuals, or Carolyn, who’s known me since we were 14, because we both seek to understand each other’s positions, not beat each other over the head.

But last night my daughter came to me and asked me to watch some videos of Bernie Sanders, who she’s leaning toward supporting. She wants me to support him too, I can tell. (I can just hear my entire family groaning now.)

I have a hard time arguing against a politician like Bernie, who’s been saying the same things for 30 plus years, who wants to even the playing field, who wants to bring the middle class back, who was raised pretty much like I was.

His popularity seems to be increasing. Even at work, there’s  a resident squirrel, who everyone’s taken to calling Bernie Sanders. He’s adorable, but has an unfortunate addiction to stale almonds.

The real Bernie seems to have something a lot of politicians don’t have — integrity, a healthy sense of humor and a real-ness you almost never see, along with a wife who is not picture perfect. I kind of like that about her. A lot of people are calling Bernie a number of names: Socialist, Communist, etc. I’m not interested in labeling him, or anyone, I just want to see what his ideas are and whether they’ll work.

I’d love to have faith in politicians again, but I’ve been burned by others, who lured me in, then let me down like a bad boyfriend. Our country has never seemed more divided with rich versus poor, black versus white, business owners versus workers, gun owners versus non-gun owners, Republicans versus Democrats. I hate it.

I think everyone decides whether they want change based on their own situation. I’m certainly not where I thought I’d be at this age. I know the recession has contributed to me and millions of others losing our jobs in 2008, and never finding an equal replacement. I know so many people my age in the same boat, it’s more than a little scary when I think of the future.

But fear isn’t going to get me anywhere.

So I watched the videos and, like a stupid romantic, started inching toward getting my hopes up. I so want to believe that there’s someone out there who’ll actually come through on his or her promises. I want someone smart and honest, who’s done the research, who knows that nothing in the world is black and white, that everything is a compromise.

I want someone who’s willing to roll up those sleeves, work hard and give it his or her all, using charm, intelligence, and a good sense of humor. I want a government of senators and representatives willing  to compromise and move us forward, instead of locked in stupid partisan politics, where the other party just digs in their heels, so the party in power can accomplish nothing.

And the thing I will never understand is why people insist on bringing in an outsider, someone who is not a politician, to do a politician’s job. It’s like running a hospital and saying, “Dang it, these doctors aren’t doing a good enough job, let’s bring in a plumber.”By the time the plumber is up to speed, all the patients are dead and everyone is wondering why the plumber didn’t work.

I want the same things in a president I want in a prospective mate, which is why it’s so scary to let my heart be won by yet another politician. It’s like love —  the same soaring affection and belief, that leaves you giddy with optimism — then burnt to a crisp when things don’t pan out.

This year, I’m taking my time. I’ll try not to let my heart overrule my head, which it usually does. I’m going to be more careful and not to get too carried away by promises, charm, and a handsome face (which, thank God, I don’t have to worry about in this race.) And maybe by spring I’ll let myself be vulnerable enough again to believe.

How ironic that one of the websites my daughter showed me was called Feel The Bern.  http://feelthebern.org/

This is what most of my recipes look like before I put them in the blog. I become scarily more like my mom every day!

And now, in keeping with being a Californian, I’m posting a recipe for Granola that my friend, Dawn shared. It’s very good sprinkled on Greek Yogurt and you can mix in peanuts, almonds, dried cranberries or raisins — whatever you like. This makes me a certifiable, granola eating California liberal, which I’m sure is horrifying my family as much as last week’s virginity story. Sorry guys.

Cook the two together until they bubble

My daughter doesn’t like much in it, so this is it without the nuts or fruit.

Once the honey – peanut butter mixture bubbles and you’ve mixed in the rest of the ingredients, pour it over 4 cups of oats in a large bowl.

Then add the nuts and the fruit and leave it in the oven for about 20 to 30 minutes. Let it cool in a dry place. When it’s done and at room temperature, store it in an airtight container.

I’m Sick of People Believing the Worst of Each Other