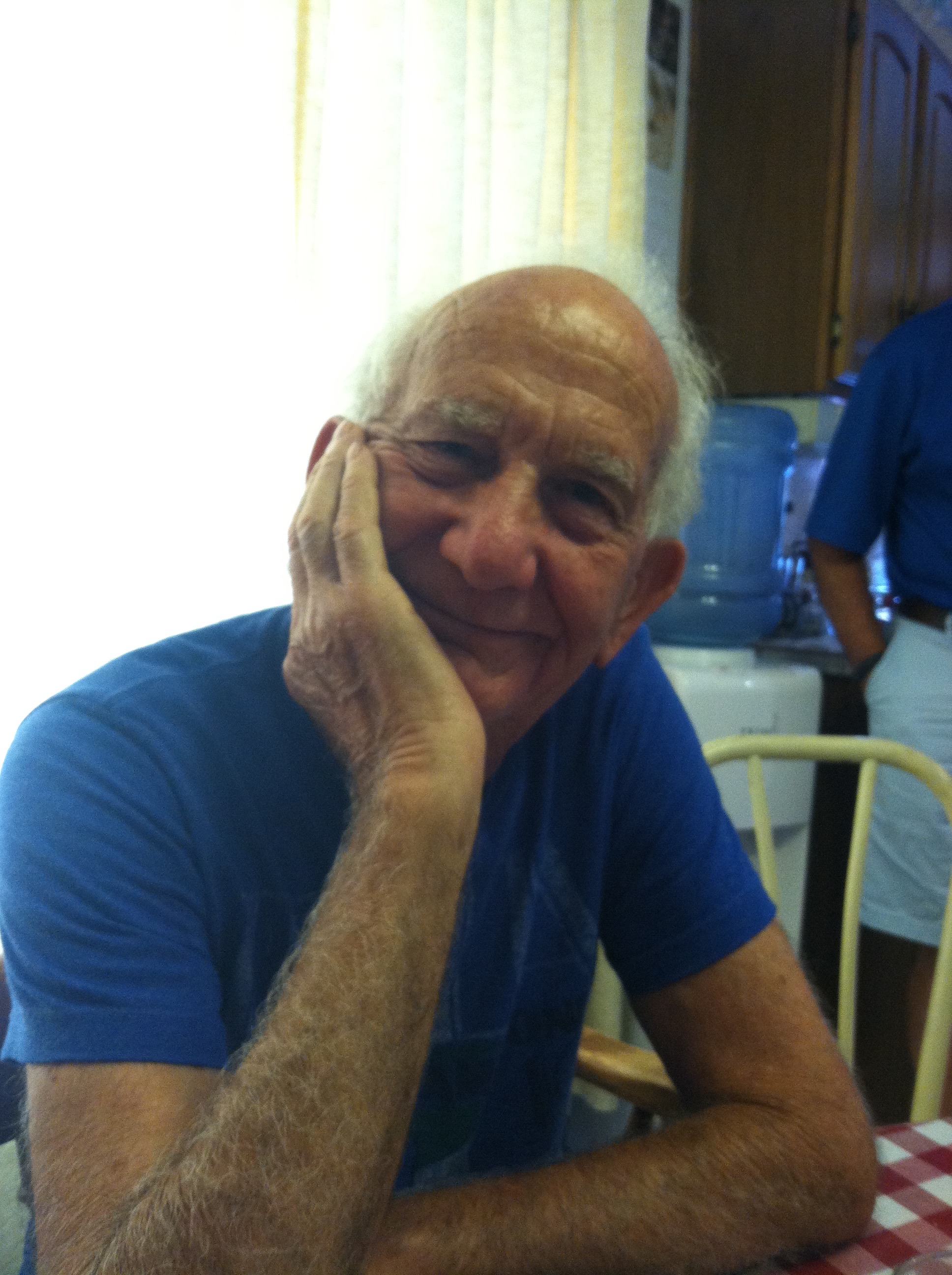 Uncle Richard. He is as cool as he looks.

My Uncle Richard called me today. He’s one of my favorite people on earth. Not just because he’s my father’s brother and a wonderful family man, but also because he’s not afraid to be silly.

He does a version of the Tarantella, an Italian dance they do at weddings (Tarantella means tarantula in Italian) where he bends his knees and dances around hunched over, looking more like a rooster than a tarantula. Then he grabs you, looks you straight in the eye, and locks your arm in his as you twirl around the dance floor. He dances ferociously, like he does most things in life and I love him more every time I talk to him.

I try to call him every month or so, just to catch up, but I’ve been busy lately, so I’ve missed him. A few days ago, I was transcribing an interview for a radio commercial I was writing, when I got a call from him. I thought for a moment about letting it go to voicemail and calling him back when I finished, but decided to answer it because who knows how many more times in my life I’ll be lucky enough to get a call from him. He’s 86, which may be old in normal people years, but in Italian man years, he’s just getting started. Still, you never know.

My sweet Aunt Blanche in their fully equipped second kitchen in the basement.

I’m so glad I did. We talked about life a little. He lives with my Aunt Blanche, who is mostly blind, mostly deaf, and doesn’t like to go out much, so he’s always happy to have a conversation where he doesn’t have to yell.

It may not sound like it, but Aunt Blanche is adorable. She has wild, frizzy dyed black hair, and stands about five feet tall. Her back is hunched over now, but she still wears pants with a belt and a shirt — tucked in– like she did when she was young. She wore blue jeans (before they were cool) and a holster with toy guns back in the ’40s when she was a kid, just like Annie Oakley. She didn’t take guff from anyone and still doesn’t.

When you visit, she grabs your coat, puts it away and makes you sit down just like my mother did. Aunt Blanch is my mom’s sister — yes, two brothers married two sisters.

Then she shuffles back and forth, taking food from the refrigerator and putting it on the plastic covered, dining room table. If it’s in her cupboard or refrigerator, it comes out. Once when I was there, after she’d put out every food item she had, she found a bag of big, puffy marshmallows, put them in a bowl, sat it on the table and said, “Eat some.” Going there is as close as possible to going back to my parents house. I love it.

She speaks in a high pitched, rapid fire cadence that’s Italian and Pittsburgh put together. If I sit and don’t eat, I  hear, “France, aint ju gonna eat? Did yinz eat already?”

One of her favorite things is reading the National Enquirer with a pair of glasses that have to be seen to be believed. One lens is convex and huge and the other is normal. You can ask her anything about Prince Charles and Camilla and she’ll fill you in on all the latest gossip. How she manages to read is beyond me, but she does it.

She also likes to ask my opinion on the numerous medications she’s forced to take for her asthma and sinus problems. She reads all the precautions and can tell  you every awful thing that each medication can do to you. And she has the largest collection of animatronic creatures I’ve ever seen, from singing Christmas trees to crowing roosters.

They move so fast, you can’t even capture them on film. Here’s Uncle Richard serving up Eggplant Parmigiano, while Aunt Blanche brings soda pop to the table.

Uncle Richard goes with the flow. They’ve been married for almost 70 years now and he says, “Well we’ve come this far, what the hell, may as well go all the way,” which is exactly what my dad used to say about my mom.

They are an amazing pair in the kitchen. Even mostly blind, Aunt Blanche can serve food and clean up afterward better than people with 20/20 vision. And just last year, Uncle Richard, at 85, made enough Eggplant Parmigiano to feed all 14 of our visiting Italian family members, plus the rest of us.  There were probably 25 people milling around their house.

After he and I chatted about our equally unromantic Valentine’s Days, and what we’ve been up to, we got into a conversation about when his youngest sister was born.

He and my dad grew up in a tiny town in a mountainous part of Italy called Roio Poggio. They were very poor. My dad said he was so hungry once, he threw a rock at one of their chickens and killed it, so they could eat meat. His mom saw the dead chicken, asked what happened to it and my dad said it must have been sick. She was suspicious, but cooked it anyway because they didn’t waste food.

Uncle Richard told me his youngest sister Sara was born when he was about 7 years old. He was sleeping on the corner of his mom’s bed when he woke up to the sound of crying and saw something moving on the brick floor. He said his mom told him to run up the street and fetch a woman from the neighborhood who was the midwife. He said she came,  wrapped the baby up in towels and helped his mother. I don’t think he even knew she was pregnant.

My father’s parents in Italy.

His mom died four years later, in 1940, and they were left with no one to care for them because my grandmother did everything. She washed clothes in the stream, beating them against rocks. She worked the farm, she cooked, she sewed, she cleaned and she took care of the kids. (I try to remember this when I start whining about how hard my life is.) I’m amazed she lasted as long as she did.

Then the pressure was on for my Uncle Olindo to find a wife. He was 20 at the time, and found a wonderful woman, named Maria who was only 19 when she became both a wife and surrogate mom. Right after their marriage, Olindo went off to war and was gone for five years — for two of those five he was a Nazi prisoner of war. Can you even imagine that?

I heard that, and thought of my 19-year-old daughter — trying to imagine her, caring for several kids, cooking, cleaning and beating clothes on rocks in a stream, during wartime, not knowing whether her husband is alive or dead — for five years. My daughter has no idea how easy she has it.

Uncle Richard said, “I don’t like to talk about it, they’re sad stories.” But I find them fascinating. I love that we have such a rich source of family history still right here in our midst — a man who tells tales that leave me amazed and tearful every time I hear them. I’m always astounded at how far we’ve come, how lucky we are in this country — WITH WASHING MACHINES, INDOOR PLUMBING  and HOSPITALS — how remarkable our ancestors were, and what an incredible source of living history we have in our relatives,  if we just take the time to listen.

I’m so glad I didn’t let it go to voicemail.