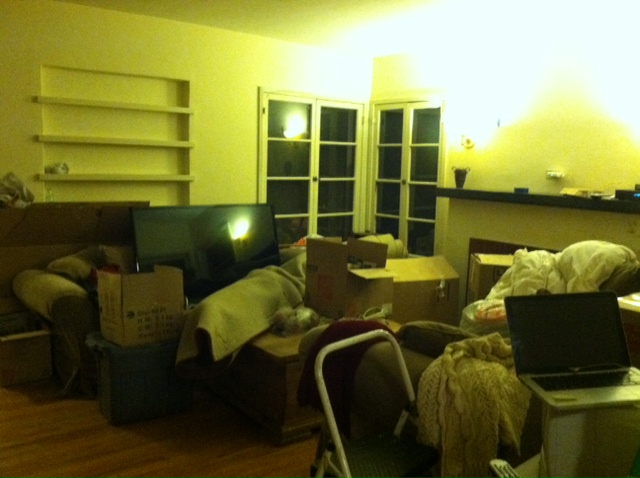 I know there’s a kitchen counter in there somewhere.

Right up there in Dante’s 9 circles of hell should have been moving.

Moving can only be made worse by:

1. Thinking you can save money by renting a truck and moving with a few friends and some guys you heard are pretty good at moving.

2.Your “mover” not showing up, and not even calling, even though you call repeatedly, begging for a response.

4. Moving into a place that “needs some work.”

5. Moving with a 17 year-old who has five, yes five, large boxes of beauty products alone. From what I can tell she uses 7 of these items, yet always needs more.

6. Moving while feeling like your head is being pounded by a 2 x 4 and you’ll vomit at any moment.

7. Moving while in a massive funk which doesn’t allow your brain to function, probably due to the 2 x 4 and the impending vomit.

8. Moving while your cell phone quits working and your cable company isn’t able to get your cable or internet up and running. (Partly because the rather rotund cable guy has fallen through the rotting steps that lead to your new apartment, causing a bit of a time crunch.)

9. Moving while knowing you have a blog you’ve committed to writing and have no internet.

I think you can see about one foot of counter space, but that could be me hallucinating.

The only thing that made this move bearable was my friends. They moved me! My dad always said, “Friends are better than money,” and man, was he right. Energetic friends are even better.  My friends, Mandy and Bjorn, who foolishly offered to help (well Mandy did — poor Bjorn just got tossed into the ensuing madness, but kindly dug in and heaved most of my heavy things) while also disconnecting and reconnecting light fixtures. Mandy, an aerobics instructor, ran up and down the stairs while toting containers five times her size. She has a body you would simply die for and is the poster woman for why aerobics is such a good idea.

I am also forever indebted to my daughter’s friend, Dado, who not only helped me carry a 55-inch screen TV through what seemed like buckets of water falling on our heads, but maintained a good humor through it all. He also helped me clean my old apartment (in soaking wet clothes) until it gleamed while I hung over the toilet trying unsuccessfully to throw my guts up. I am also eternally grateful to my daughter’s boyfriend, Reef (that’s how you know I live in California) who gallantly toted all our crap, with a smile and a positive attitude, and my two kids, who had no choice but to help.

Poor Topper, my Corgi, was suspicious from the day we started packing. He got the great end of the deal though, ending up at Mandy’s house, which he probably thinks is the Waldorf Astoria for dogs. As soon as I clear a few more boxes I’ll bring him back. The hard part will be dragging him while his nails desperately cling to Mandy’s/The Waldorf Astoria’s porch.

As for packing, I’ve learned something. You should really start packing six months ahead of time, you still won’t be ready, but you won’t look like the idiot I must have looked like (trying to get work done first) waiting until the last week to pack. In fact, I’d keep a couple of boxes packed at all times, in case you ever get the urge to move. I’ll make you look slightly more prepared.

I wouldn’t have moved if it hadn’t been for the ridiculous amount of money I was able to save. It would be a house payment in any other state. However, in order to get this deal, I am moving into a place that “needs some work.” My brothers are shaking their heads right now, going, “Oh God, here she goes again, what has she done?” But when it’s done, it’ll be cute. I just hope my landlord keeps his promise to keep working on it. I plan to encourage him with baked goods and stern Italian woman looks, which worked well for my mother.

Me, only mostly dead, at the end of the night being escorted to my newly made bed by my son.

I’ll keep you updated as to how this goes and plan to get back to cooking as soon as I make visual contact with the kitchen counter again. If I go at light speed, that could happen today — OK maybe tomorrow. As my dad wisely said at times like this, “We’ll see,” which I think really means, don’t hold your breath.

The Circle of Life — Already?