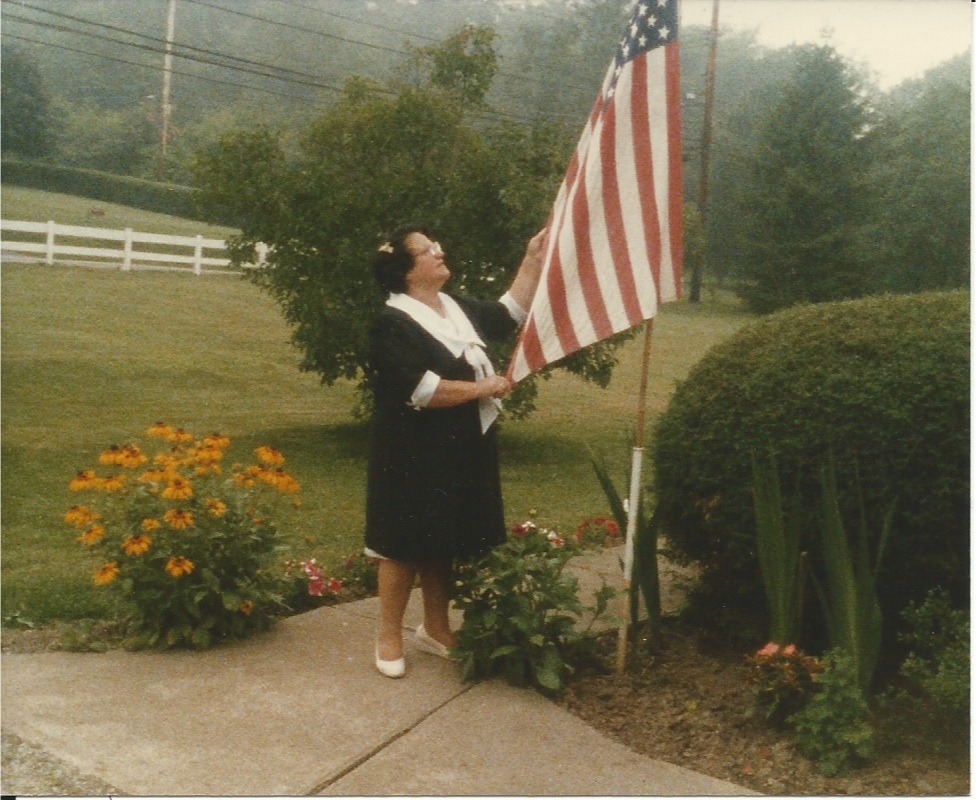 My mom had a pretty serious accent, which you already know if you’ve been reading this blog. The Fourth of July was: Da Fort of July. So she seemed very Italian, which she was.

But she was born in the USA right before her mom whisked her and her two sisters off to Italy. Since they were all  within a few years of each other, this leads me to believe my grandmother couldn’t have been terribly happily married. What new mother says, “Hey, I think I’ll take off with my two infants and a toddler all the way to Italy for fun?” Frankly, it’s a little suspicious, but I’ve never gotten to the bottom of it, which is probably for the best since they reunited after 14 years and had six more kids. Love is funny that way.

Anyway my mom and her sisters were all proud US citizens raised in Italy, who came to the U.S. when my mom was about 14, and by then Mom’s accent was cemented. My mom was thrilled to be here. She loved this country with a rapture she saved for special things like: Jesus, her children, Bob Barker, lottery tickets, great fish dinners and  tropical fruit.

So, every Fourth of July Mom demanded we celebrate the two events. When I was little we celebrated with a picnic at Brady’s Run Park which always included her birthday cake — with obligatory firecracker emblem and tiny flag.

Another ritual on the Fourth of July was Mom’s photo. Her birthday photo had to be taken alongside the American flag. One of these days I’ll count them all, but since we haven’t gone through all my parent’s photos yet, I only have three to post.

After the picnic we went to Spotlight 88, the drive-in movie theatre, where we got to see fireworks followed by whatever movie was out.  My mom loved the movies and would have loved to have been a movie star, but would have slapped any actor who tried to kiss her, so in the interest of public safety, it’s best she became a mom.

She also demanded we buy her birthday gifts.  This was tricky.  If she loved what you bought, you knew it immediately.  If she didn’t, you also knew that.  One year I made her a dried flower arrangement in a glass brandy snifter.  She took one look at it, tried to hide her disgust, and said “Eeetsa pooty Frenzy, for dead a flowers.”

Putting off buying her a gift became a talent.  One year I forgot and apparently one or two of my siblings gifts didn’t arrive as scheduled either and she was very put out, until my friend Rick showed up.  He gave her a little package, which was impressive because she never even got his name right, even after knowing him for a year.  She opened it and loved the little salt and pepper shakers that went with her collection.  Then she uttered one of her classic lines: “Yunz damma kids should a be ashamed offa yourselves.  Yunz dind a getta me nading and dissa lilla stranger boy comes here anna geeves a me dissa nize a gift.”

Allegra’s cake sans age…she forbade me to include it. There are those dang dots again. This is getting embarrassing

As she got older she decided she liked her birthday cakes better than the ones from the bakery so she made her own. Her cakes were delicious — vanilla cake with coffee, bananas and custard in the middle and coffee frosting on top. I’m sharing the recipe here, which I’ve perfected a bit and stand by 100 percent.

Happy Early Birthday to Allegra who knows a good cake when she tastes one!

My friend Allegra loves this cake so much, she requests it every birthday, see photo.  Note the highly technical birthday decorating I’m famous for (and mocked by my children for) — dots.

Prepare cake mix as directed and pour into two 8″ or 9″ greased and floured round cake pans. When cakes are done, remove from oven and remove from pan, placing them on a flat dish. * See note at bottom about flipping cakes.   Cover the cakes, while warm, with plastic wrap, this seals the moisture in and stick them in the fridge to cool.  But be careful when you remove the plastic wrap from the top because it sometimes sticks.

My mom always used coffee to make her icing but it never had a good spreading consistency so I found this recipe online (wish I remember where) for espresso buttercream frosting and it worked great and tasted good too!

1. Mix the espresso powder into the vanilla until dissolved and set aside.

2. Using a whisk attachment on your mixer whip the butter on medium high for five minutes, stopping once to scrape the sides of the bowl. Reduce the speed to low and add the powdered sugar a little at a time, waiting until it’s mostly incorporated before adding more. Once all the powdered sugar has been added, scrape the sides of the bowl and increase the speed to medium high and whip until fluffy; about a minute or two. Add the espresso and vanilla mixture and continue to mix on medium speed until completely incorporated.  Add fine sea salt to taste.

Remove cakes from refrigerator and unwrap carefully so cake doesn’t stick to plastic wrap. You can cut each cake in half (which is more work) or cut the rounded top off of one and use it for the bottom half of the cake and the other for the top.

Place bottom half  of cake on cake stand and drizzle coffee on top. (That will be the bottom layer). Use about 3/4  to one cup for each half of cake. Then pour 1 to 1 1/2 cups of pudding over the cake that’s saturated with coffee. Place sliced bananas over cream. Set aside.

Then pour 3/4 cup of coffee over inverted top half of cake and flip it over so it forms the top layer of the cake. Frost the cake with the buttercream and go crazy and decorate with as many dots as you want!

* When removing cakes from pan: Remove when right out of the oven.  Take a plate and place it over the cake pan. Flip cake over so it’s out of pan and on plate.  Then quickly put another plate on the bottom side of the cake and flip it again so it’s right side up.  If you go fast, it shouldn’t stick.  If it does, then email me and yell at me. I deserve it.

The Most Awesome Cheesecake You’ve Ever Had

Passing Down the Mascara Wand to Your Daughter-- Gracefully