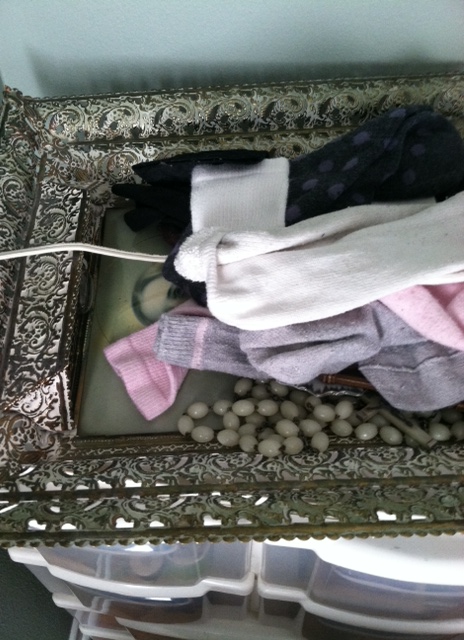 In a corner of my bedroom, I found Jesus under a pile of socks.

Jesus is in trouble. Ever since my father’s house sold last year, he’s been in limbo. I just found my mother’s treasured 8×10 of him in a corner of my bedroom buried under a pile of partnerless socks. When I moved the sock pile, I discovered my mom’s glow in the dark rosary beads and a St. Anthony plaque laying on top of him. I claimed them all in a moment of nostalgic passion this summer and now I feel guilty I forgot them. My mother would murder me if she was here.

She absolutely loved Jesus and said she would have been a nun, but went on a retreat once and made a grim discovery. She said, “All a dey ate was a datta damma oat-a-meal, morning, a noon anna night, and I said, ‘Dis issa shitta for da birds.’”

I think the Catholic Church dodged a bullet with that decision.

But she never lost her fervor for Catholicism, and proof was the number of religious icons in our house. That number multiplied after she and my Aunt Blanche won identical 8 x 10’s of Jesus at our school picnic at Idora Park when I was 9.

Jesus is surrounded by a large gilt frame with a light bulb at the top. It’s one of those photos where his eyes look heavenward and when the light is on he looks quite celestial. The first home she gave him was on the sewing machine she won at Sears. (She tried sewing, but made a couple of outfits that looked like something Ku Klux Klan members would wear, so the sewing machine went into an early retirement.)

At home on the sewing machine, some saints hidden by flowers.

She added a giant glow in the dark rosary and wrapped it around the frame. At least if she ever had to pray on a pitch-black night, she would be prepared.

Soon Jesus was accompanied by a procession of saints, and family photos, all in a specific order, which wasn’t a problem until you needed to sew. If you didn’t put all the statues and photos back exactly the way she had them, you’d hear an admonishing, “Jesus don’d a like itta wenna you do datta!”

Then she demanded that, every morning we turn on the light above him, and say, “Good morning Jesus.” Every evening we had to turn off the light and say, “Good night Jesus.” We kept forgetting, which was a great disappointment to her, so she just kept the light on day and night and switched lightbulbs, when necessary.

Jesus became her companion and therapist. When she was upset, you could hear her talking to him:   “Jesus, ha comma my stingin a husband donda a wanna take a me anywhere? Talk a some a sense eento heem OK? Imma sake anna tired offa dis!”

The tiny TV of the saints.

You couldn’t walk into a room without bumping into a Jesus, a Blessed Virgin or a saint somebody. She had an amazing collection. Once a friend of mine and I counted, just the icons in the kitchen and dining room, and came up with 40. I’ve seen churches with less.

My favorite, which I still have, is her tiny, two-sided plastic TV of the saints with slides inside. If you hold it up and look at one side you get The Infant of Prague, when you flip it over, you get St. Anthony. If you flip it again, St. Theresa replaces the Infant of Prague.  I love it!

More room to spread out.

Once Jesus and his entourage became too large, Mom moved them to the top of the old cabinet television. My parents never got rid of furniture; they just repurposed it. The cabinet TV got moved into the dining room giving Jesus more real estate, so he and the saints could spread out.  He stayed in the dining room, blessing every meal for almost 50 years.

So, of course I had to find an appropriate home for him and a few others in my house.  How could I not?

But Jesus needed repairs.  After 50 years, the backing on the 8×10 was toast. My dad tried to fix it with duct tape — see photo. His motto was:  “Why spend money on a something new when you can fix the old one?”  As he aged, duct tape became his go-to repair tool. He kept it in his dresser drawer. He would rather spend five to seven dollars on a roll of duct tape than the two fifty it would have cost for new backing.

Once he accidentally poked a hole in the fake wood paneling of the bedroom I was staying in and quickly repaired it with silver duct tape. He smiled and said, “There, doesn’t that look better?”  My daughter taped a picture of the Beatles over it, to hide his handiwork.

The girl at Aaron Brothers actually took a photo of Dad’s repairs, she thought it was so funny.

So, my mission today was to fix Jesus and give him a proper home.  I almost put him in my bedroom, but realized that could get uncomfortable if I ever get lucky, plus there was no electric outlet in a good spot, so I opted for the hallway.  I cleaned his plastic cover, put the new backing on, wiped the gilt frame, put one of my mom’s doilies on the tiny wooden table, sat him down and turned the switch.

Jesus lighting up my hallway…I think he needs more room.

I felt better  immediately.  Then I realized, I’d forgotten the glow in the dark rosary beads.  So, I ran and got them and added St. Anthony too.  Then I touched the frame that my mom touched so many times and looked at Jesus, her therapist, and realized he made my apartment feel a little more like home.

But now I’m thinking he may need a bigger space — maybe a sewing machine.