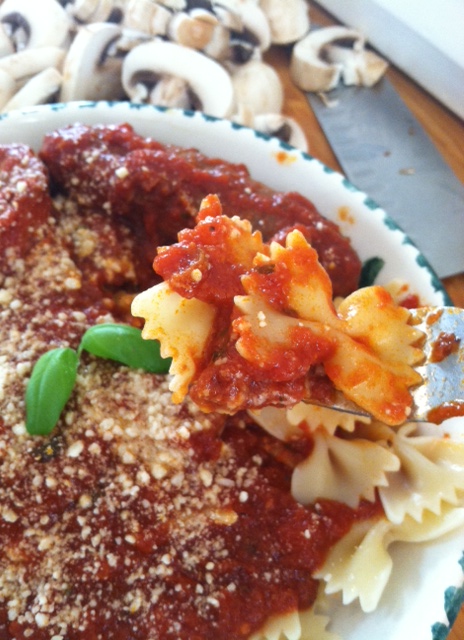 Last weekend I made sauce for the first time in months. It even had the power to draw my daughter downstairs before 11 a.m. Still in her pajamas, sleepy-eyed, she said, “I love waking up to the smell of spaghetti sauce.”

The smell is heavenly. The garlic and olive oil mingle with the sausage, tomatoes and herbs, filling your kitchen with tomatoey love. You should start cooking it or make friends with Italians, so you can experience the magic.

If I was a good Italian mother, I would make it every Sunday, but I usually don’t have time.  As I write this, I’m vowing to do it more often because I feel so guilty.

I’m sure it reminds my daughter of when she was a happy kid living in our cute house, pre-divorce. But, I know she’ll have good memories of this apartment too, because I say,  “Home Is Where The Pasta Is.“ Nothing else really matters.

Here, our pasta is usually made with pesto because my daughter and her boyfriend are pesto addicts, but today I made tomato sauce with sausage and pork that cooked for hours and reminded me of being a happy kid in my parents’ house.

My mother, stunned at my betrayal.

I am now going to write something that could kill me instantly, so just in case, thanks for reading my blog and following me.

I was not a huge fan of my mother’s spaghetti sauce. (I’m waiting for the lightning bolt to fly through the window and fry me.) Her sauce was thinner than I like. The flavor was good, but hers was a little more salty and less sweet. So when I was in my 30’s I started making pasta sauce more to my liking.

(Wow, no lightning bolt yet, she must be up there eating salami.)

One slow summer afternoon when I was visiting my parents I said, “Hey Ma, I’m going to make some spaghetti sauce today.” I’ve been making it lately using all fresh herbs and it’s really good.” I never said the six most dreaded words to an Italian; “My sauce is better than yours,” but my implication was clear.

She responded, ”Well, I’mma gonna make a somma sauce today too, so you show me how you make a yours, OK? I wanna see.

She came back with, “OK, you show me wenna a da time a comes.”

Later that afternoon we settled into our positions at my mom’s, white, electric, 1950s kitchen stove. I was at the right burner, she was at the left, apron on and ready to go. The garlic and olive oil were in and we were adding mom’s homemade canned tomatoes. I complimented her on how good and naturally sweet her tomatoes tasted compared to store-bought tomatoes. She agreed.

We added the next ingredients; tomato paste and herbs. Mom was adding some dried Italian seasoning and I pulled out the fresh rosemary, thyme, basil and oregano. I was chopping them up and adding them to my sauce when I caught my mother sneaking a look at my ingredients.“Whatta you put inna?” she asked suspiciously.

I said, “This is fresh rosemary, it really…” when she cut me off with this simple command, “Putta some inna.” She was pointing to her sauce, not mine.

I said, “But I thought you were making your sauce…” when I was cut off again by her pointing the small paring knife she was using, at me, as she again said menacingly, “Put it inna here!”

I looked at her with a smile and said, “Oh, a little competitive are we?” And without a trace of humor, or a lowering of the paring knife, she replied, “Justta put it inna.”  That moment of clarity showed me that Italians are without humor in just one area; cooking.

I chopped up all my herbs, divided them neatly into two piles and gave her half of everything I had. Then said, “You know what? I think your sauce is better than mine.” She agreed.

Never say or imply “My sauce is better than yours to an Italian.” This woman gave birth to me – yet the possibility of cutting my heart out danced through her head as I challenged her sauce. Sauce smack talk is only appropriate if you actually do want to die.

Mom got her revenge though. My daughter confessed to me years ago that she prefers my Uncle Richard’s spaghetti sauce to mine. She won’t even finish a bowl of pasta for me and she asks for seconds at his house. Maybe I should point a paring knife at her.

For years I never included my sauce recipe in this blog, but I just revised it to include it. I figure if my Uncle Richard finally gave me his recipe now that he’s 89, I can part with mine at a much younger age.

Pasta with sausage and a nice chunk of tender, slow cooked pork. it’s heaven on a plate!(These are good and the added basil makes them taste as close as you can get to my mom’s homemade canned tomatoes.  (If I was a good Italian girl, I’d be canning my own – God, more guilt!) Progresso also sells canned Pomedori Pelati (peeled, whole tomatoes).  You can use either, but I like Cento because I can buy a huge can at Costco and I think they have less salt.)

5 to six Pork Ribs with bon

1 whole head of garlic, separated, peeled, and crushed  or minced

Place the oil and butter in a large, deep pot and brown the pork and the sausage. Then remove it, and put the garlic in the pan and cook it for about 2 minutes.

Return the meat to the pan and turn off the heat.

Remove the tomatoes from the cans and cut them in half removing the seeds. Then place them in a large blender or food processor and process for a few seconds until just blended.

Turn the heat back on low, under the pan and pour the tomatoes over the meats and garlic.  Stir well to mix. Once all the pureed tomatoes are added, add the Italian seasoning, the fresh basil,  rosemary and parsley. Add the wine and taste the sauce. If it needs sweetening, add the apple juice concentrate. If you think it’s sweet enough without it, leave it out.

Place a heat diffuser under the pot and cook the sauce for three hours, stirring every 15 minutes or so.  Serve over pasta with grated Parmigiano, Romano or Pecorino, and enjoy!

Mom, Fitting In and Food

I Was Almost 21 Before My Father Said, “I Love You”

Happy Fourth of July! Start it with Crepes!