The Power of Pizza 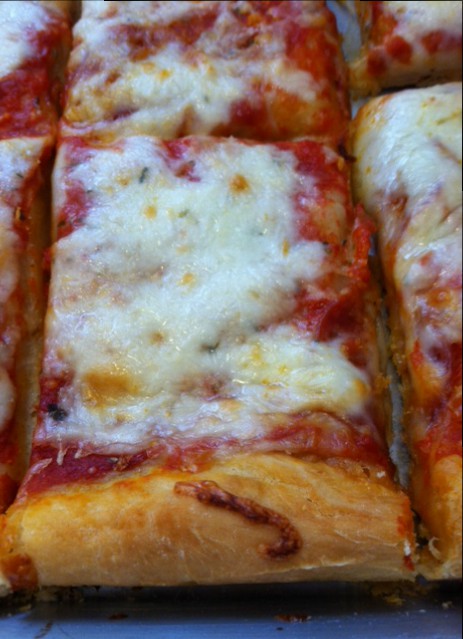 My daughter just started college a few weeks ago. I hate to admit it, but it’s nice to be able to take a break from my indentured servitude with the PTA. I think I served for 12 years. PTA years are like dog years, so that’s close to an average life expectancy I put in. I did what I had time to do, but there were women and men, far more devoted than me, who practically lived at the school — God bless their demented little heads.

I salute those devoted PTA parents. They did it because they loved their kids. If you’re one, reach behind your back and give yourself a nice little pat because you probably won’t get a thank-you from your kids until they’re in their 30’s.

I also want to salute my mom, who always wanted to help, but didn’t drive and was self-conscious because she knew she didn’t fit in. She wasn’t a PTA mom, but she did what she could, cleaning off food trays in my elementary school cafeteria — a thankless job. However, it wasn’t until I was in high school, that she finally got the acknowledgement she deserved.

Dawes Gym — Inside these doors, I had one of the most important realizations of my life.

It was spurred by an unlikely event — The Girls Athletic Association’s Mother-Daughter Night in the gym. If you’ve been reading this blog, you’ve seen photos of my mom, and know she was no athlete. As far back as I can remember she was heavy, averaging 220 pounds on her barely five foot  frame. She dropped to what seemed like a svelte 200 for my parent’s 25th anniversary, but could never shake the pounds she said she gained once she had kids.

So, I knew she wasn’t going to be first pick for the Mother-Daughter volleyball team. I’m sure I didn’t want her to go because I was afraid she’d embarrass me. I know I mentioned the event to her in that snotty adolescent way girls talk to their mothers:

“Oh there will be girls with their mothers in the gym. They’ll be playing volleyball and basketball in shorts and running around playing other games. I don’t know what you’d do there, but If you want to come you can.”

I clearly remember the knowing disappointment in her voice. She said,  “You don’d a wand a me dare. Ah’ll a look a ligah bigga buffalo weet a all a dose skeeneey modders.” Then with sad resignation, she said, “Eeets a OK honey, you go widoud a me. Have a good a time a.”

I should have felt rotten, (I certainly do now) but back then I was relieved. I knew she wouldn’t be able to play like the other mothers and I just didn’t want the embarrassment.

Mom making bread. If you look closely, you can see three cookie sheet sized pizzas on the table.

No one had a mom like mine. With her accent, her bifocals always sliding down her nose, and her dyed, black hair in that 1940’s hairstyle, she was more like a grandmother. Plus, she was loud, and always telling people how wonderful I was. I was afraid people would laugh at both of us.

So, she stayed home and I went to GAA night with my best friend Carolyn, her young mom, and a little something my mother sent along.

All night, I watched mothers in blue jeans and shorts doing acrobatic leaps in the air as they played volleyball. They looked like they were having a great time with their daughters who alternated between laughing and looking humiliated.

All the while I was playing, I kept thinking, “I wish my mother could do stuff like this. She’s never been cool like these mothers. Why did she have to wait until she was 42 to have me?” (Like it would have still been me if she was twenty.) Why does she have to be overweight? Why does she still have that dumb accent? Why can’t she be like these mothers? I was feeling alone and very low all night and finally, it was time to eat.

Mom with a pizza and loaves of bread she just baked.

Since my mother wasn’t coming, she did what she usually did, she sent food. Her idea of a little something was two pizzas the size of large cookie sheets. She had baked the pizzas the day before and they became her official representatives.

After everyone finished playing and settled down in the gym bleachers to eat snacks, I brought out the pizzas my mother had carefully wrapped in aluminum foil. I sliced them, passed them around and waited –nervously hoping people would like them.

I was also nervous because Mom was an experimenter.  Sometimes she’d throw in whatever she had. — If she was roasting a goat head (and yes, she did roast goat heads)  she’d throw some of that in, if she had hot dogs she’d put those on top of the pizza — you just never knew. I made sure things checked out OK, then it was quiet as everyone ate, and the rest of the night will stay with me forever.

I started hearing whispers. Mothers, daughters, the gym teacher — everyone was asking about the pizza. Where had it come from, who made it, and where could they get more? Everyone kept telling me how lucky I was. None of them ever got homemade pizza, let alone pizza this good!

Uncooked pizza with pepperoni on top

In minutes my mother became the most praised and possibly, the most famous mother in the history of GAA Mother-Daughter Night and she wasn’t even there. You could hear the echo of ooohhh’s and aaahhhs all through the gym. The way these people carried on, you’d have thought they’d never had pizza before.

I went from feeling like the pathetic orphan with no mother to play with, to the luckiest kid in New Brighton. And the pizza wasn’t even hot, it was cold, day old pizza and they still liked it.

I was overwhelmed and completely humbled.

Later that night I remember sitting alone, looking down at the varnished  gym floor from the darkness of the surrounding bleachers and thinking, “I’m never going to resent my mother for what she doesn’t do anymore.  She does something, it’s just different, that’s all.”

I felt ashamed for all the times I’d been embarrassed by her and for all the times I’d wished she’d been someone else — someone cooler, quieter and normal.   I finally realized that my Mom’s contribution that night and countless other nights was every bit as important as the “normal” moms, she was just in a different talent category. When I got home and told her how much everyone loved her pizza and how lucky they said I was, she was beaming. I thanked her and it was the beginning of a new chapter between us.

Anything that can change the mind of a teenager is a something to be reckoned with. Never underestimate the power of pizza.

Shredded Mozzarella (add in the last five minutes of baking)

This is pretty easy. Just use the recipe for Ma’s soul soothing bread below. After the dough has risen once, take a portion and roll it out flat. Mom used to put hers on a greased cookie sheet, it’s very difficult to get it to stick to the sides when the sheet is greased, but with patience you can do it.

Since mom’s homemade tomato sauce isn’t commercially available, you should try Progresso or Cento peeled tomatoes with basil (pomodori pelati). They are the closest I’ve ever come to hers. The basil gives the tomatoes a nice flavor. Seed the tomatoes, then puree the seeded tomatoes. Pour the tomato sauce on the dough, then lightlysprinkle on a little oregano. Not too much, just enough to season. Then place sliced pepperoni on top  and sprinkle some grated (Parmesan or Romano) cheese — again, just a little, not too much. Bake the pizza in the oven at 200 for about 5 minutes then raise the temperature to 350 and bake for another 15 to 20 minutes or until the crust looks golden and done. Note: The shredded mozzarella cheese which goes on top of the pizza should be added during the final five minutes of cooking.

(Makes enough for two pizzas and 3 loaves of bread)

In a very large bowl, mix yeast together with warm mixture of milk and water. Milk and water mixture should be warm, but not hot. “Just a warm enuffa so you can a smear it uppa witta you hands,” was how she described it to me. (About 110-120 degrees) Make sure yeast dissolves by mixing it with your hand. (Be careful because if the water is too hot it will kill the yeast and your bread won’t rise.) Then add sugar and salt to warm liquid mixture and stir until it dissolves. Add oil and melted butter. Add 8 to ten cups flour and mix until dough becomes sticky. Then pour dough mixture onto well-floured surface.

Continue adding flour, and knead the bread until it no longer picks up flour – about ten minutes. (Do not make the mistake of punching the bread, my mother used to do this (probably when she’d call me and I wouldn’t come) and said it made her bread crumbly, so just gently knead it.) Then place it in a container covered with a clean cloth. Place it in a warm space and let it rise.

After the dough doubles in size, remove it from the bowl and knead it again on a well-floured surface. Once the dough is kneaded for about five minutes take some dough (about 3 cups) and roll it out to make a pizza.  Use the rest of the dough to make another pizza or small loaves of bread.  Place the bread dough in greased pans. Cover the pans with clean cloth and let the dough rise again before baking. Place the loaves in the oven and bake at 200 degrees for 15 minutes. Then raise oven temperature to 350 degrees and bake for 45 minutes or until uniformly browned. Take the bread out of the pans and let cool. (If you like a soft crust, brush the crust with butter when it’s done baking. If you like a harder crust, lightly spray the top of the dough with water as it’s baking in the oven.