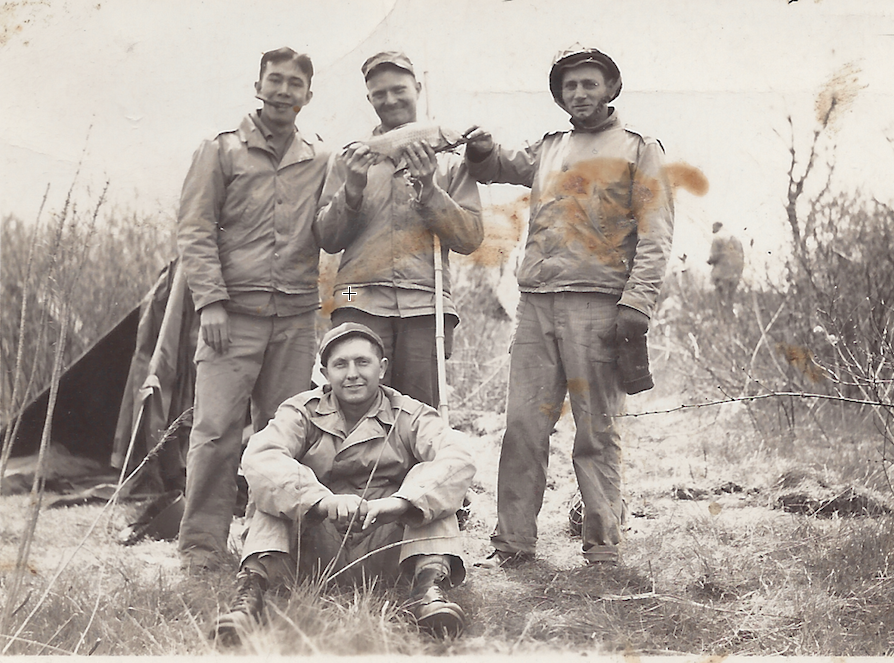 Dad in front, with Army buddies. I think they’re holding a fish. (Photo is discolored.)

My father served as a medic in the Army in World War II. He never talked about it until he was in his 90s, except to let us know that war is hell and he was not a fan of anything in France, especially the French.

So when I went to Paris  with two friends for my 40th birthday, and came back with stories of how nice the French were to me, he was surprised. I told him about the fantastic art I saw in the Louvre and his response was, “Well, they should have good art, they stole it from Italy.”

Clearly, he was not a candidate for French diplomat, but he did concede that the French do know their stuff when it comes to pastries. (I actually took a panoramic lens camera with me so we could get everything in the shot at pastry shops.) Remember last week when I said I would share the recipe for a fabulous crust? Well, I tried it and it’s as good as I thought it would be. It’s as good as the quiche crusts I tasted in Paris and that is serious praise, because they were buttery, heaven.

I got it from David Lebovitz blog. David really knows his food. He was the pastry chef at Chez Panisse, Alice Waters restaurant in Berkeley, California. Her belief is that food for restaurants should be local, fresh and sustainable. One of the things on my bucket list is to go to Chez Panisse one day (hopefully soon) and enjoy a truly fantastic meal.

The Danish Pastry puff recipe in my brother, Bernie’s food column from the 80’s.

David now lives the life I’d like to be living. He’s in Paris, cooking, baking, entertaining and blogging. I found the recipe in his blog, but in truth, I’ve secretly known this was the key to good crust, ever since I made my first Danish Pastry Puff. (I got that recipe years ago from my brother’s food column.) The crust for the puff is so tender, it melts in your mouth and I thought, Why don’t I use this as the crust for my quiche and pie?  I didn’t because every pie crust recipe I’d ever read said that was wrong.

Most crusts are made the same; the butter isn’t melted.  We’ve been told for years that everything has to be cold. But, it’s the melting, the slightly browned butter, and the added water that seems to make the difference, which flies in the face of conventional crust wisdom.

Apparently, the Danish had an inkling and their pastry puff proved it.  And a French woman, named Paule Caillat,  who teaches at a cooking school called Promenades Gourmands, in France, has known for years and shared it with David for his blog. How this was kept secret from us crust bakers for so long is a mystery.  Maybe we just never looked very hard for it or maybe — it’s a  French conspiracy.  I’m sure my dad would go with the conspiracy theory.

For Memorial Day,  I’m giving you my recipe for a Swiss Chard and Sausage Quiche (with Paule’s/David’s crust). It’s perfect to bring to a picnic and is good warm or cold.

I hope you enjoy a Memorial Day filled with good food — like this quiche, and gratitude for those who’ve fought for us. Whether they were lost on the battlefield, or returned to their families, none of them are ever the same after war. I salute all veterans, especially my dad, who I miss every day. Here’s a link to a Memorial Day story I wrote about him last year, published in the Pittsburgh Post Gazette.

1. In a medium-sized ovenproof bowl, such as a Pyrex bowl, combine the butter, oil, water, sugar, and salt.

2. Place the bowl in the oven for 15 minutes, until the butter is bubbling and starts to brown just around the edges.

3. When done, remove the bowl from oven (and be careful, since the bowl will be hot and the mixture might sputter a bit), dump in the flour and stir it in quickly, until it comes together and forms a ball which pulls away from the sides of the bowl.

4. Transfer the dough to a 9-inch (23 cm) tart mold with a removable bottom and spread it a bit with a spatula.

5. Once the dough is cool enough to handle, pat it into the shell with the heel of your and, and use your fingers to press it up the sides of the tart mold. Reserve a small piece of dough, about the size of a raspberry, for patching any cracks.

(Paule takes a fork and reinforces the dough to the sides, which I didn’t find necessary.)

6. Prick the dough all over with the tines of a fork about ten times, then bake the tart shell in the oven for 15 minutes, or until the dough is golden brown.

7. Remove from the oven and if there are any sizable cracks, use the bits of reserved dough to fill in and patch them.

Quiche with chard, sausage and cheese about to be covered in egg mixture.

Rinse  the Swiss Chard. Do not include the stalks, just the leaves. Spin the chard to removed excess water. Then finely chop it.

Place the olive oil in a large pan and add the finely chopped garlic and the Swiss Chard.  Cook for about 7 minutes until tender. Set aside

Place the sausage in a frying pan and cook it until it’s no longer pink.

When the crust is done baking, let it cool for about 15 minutes then layer the sausage and swiss chard in.  Then cover that with the Gruyere cheese.  Pour the whipping cream and egg mixture over top and bake at 350, 20 to 30 minutes, or until the top is lightly browned and mixture is firm.