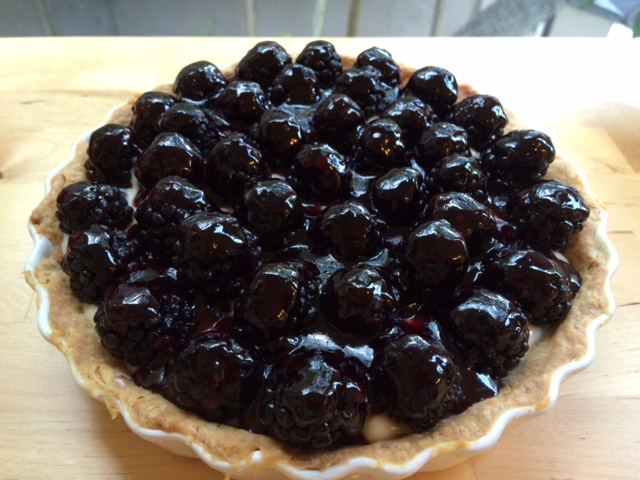 A good neighbor is someone who, years after you’ve moved, still calls when the blackberries are ripe in his yard so you can come pick some. That’s what my former neighbor, Brian, did a few days ago.

We had great neighbors in my old neighborhood. One let me pick apricots in his yard. You’d bite into them and the apricot juice would run down your chin. That’s what a real apricot should do. Another couple, Doris and Dimitri, were like Greek green grocers, who stocked me up with figs, grapes, tomatoes, peppers, and anything else I could carry, along with a glass of wine or three, and dinner!

Rubber gloves tried but failed to protect my chubby fingers from the brambles.

I drove over to Brian and Pam’s with my basket and long sleeved shirt and braved the brambles for enough blackberries to make jam. (These might actually be called marionberries, but who cares?  They’re delicious.) Even though the bushes did their best to rip my flesh apart, in spite of the rubber gloves Brian supplied, I kept picking.

Fresh blackberries, so worth it!

I learned it from my parents, who I thought were torturing me and my siblings, with blackberry picking in the woods when we were kids. In the middle of  sticky Pennsylvania summer when other kids were playing in pools and frolicking in the sun, we were sweating our guts out in long sleeved shirts and pants, picking berries. All you could hear was the loud buzz of insects, me whining,  and the plink every time a berry hit the bottom of the pail. But when my mom’s blackberry jam and pie came along, it was well worth the sweat and scratches — another lesson in delayed gratification.

I stopped by Brian and Pam’s yesterday to drop off some jam and there were more berries to pick, so again, they let me go for it, and only mocked me a little for being  so “hunter-gatherer.” (Actually they called me a “ho” for blackberries.)

Brian and Pam’s house is right beside my old house, so while I picked blackberries, I couldn’t help but glance in the backyard and remember all the nights we laid with the kids on blankets on the ground and looked up at the stars, and days when we pulled carrots out of the dirt, washed them and ate them right there. It still feels a little weird that the house isn’t mine anymore because once you know every nook and cranny of a place, it becomes part of you.  But every time I see it, it gets a little easier and one of these days, maybe it won’t seem weird at all. I must be growing.

Look at the size of those berries!

I wanted to make my blackberry crisp with peanut butter crumble. (If you missed that recipe, check out my blog post on Pies and Virginity, it’s killer!)  But, you’ve already seen that, so I decided on a blackberry tart.  The pastry crust, filled with cream and topped with juicy blackberries is unbearably good. I just had a piece for breakfast. (This explains why the diet isn’t going as well as I’d hoped.) You can make the crust and the cream the day before then assemble it a few hours before serving it. You will love this!

And wait until next week! Oh my God, I just learned something about pastry crusts that I can’t wait to experiment with and share! (I may have to change all my pie crust recipes.)  It will make you a pastry god or goddess but will not help your diet.

In the meantime, enjoy your home and your neighbors.  Good ones are hard to find.

Mix flour, salt and sugar together then cut in butter.  Mix until it forms small crumbs.  Add enough half and half so the dough can be molded into soft balls.  Better that the dough is too soft and sticky than too hard. Once you add the liquid and have made the balls, wrap each one in flour coated plastic wrap and flatten out dough.  Place in refrigerator to cool or place them in a sealed plastic bag in the freezer and use them later. (To defrost them, just put them in the fridge or on the counter. Microwaving is too fast and the butter will melt. If you do microwave them because you’re in a hurry, watch them very closely and only do it ten seconds at a time.)

Vanilla pudding. It thickens as it cools.

2 TBSP.  cornstarch (first mix it with a tablespoon of cold water to make a creamy paste, then add it to ingredients)

Combine all the ingredients in a medium saucepan over medium heat.  Stir with a whisk constantly until the mixture thickens. Once it’s thick enough to coat your spoon, remove it from the heat and cover the pan with a lid so it doesn’t form a skin. Let it cool.

Blackberry Coating (Don’t do this part until the tart has been assembled!)

Place the jelly in a small saucepan and add the water, stirring over medium heat. In a minute the jelly will have liquefied.  Then it can be drizzled over the berries for that beautiful sheen.

Roll out the pastry dough and press it into a tart pan. It doesn’t have to be beautiful because no one will see it.  Just press it into place.  Pierce the dough all over with a fork and place some parchment paper over it and fill it with pie weights or beans you don’t intend to use.  Bake at 350 for about 20 to 25 minutes or until golden brown. Lift the parchment at about 20 minutes and check the bottom.  If the bottom hasn’t baked enough, remove the parchment and the beans and let it bake uncovered the rest of the time.  When it’s a light golden brown, remove it and let it cool.

Creating the tart — start on the outside with the berries.

When the crust is cooled, and the cream is cooled, spoon the cream into the crust until it’s almost full. You should have enough cream for one 9″ tart.  Gently rinse your berries and lay them on a towel to dry making sure most of the water is gone once you start to assemble.

Start on the outside and form a circle with the berries.  Then go to the next circle, etc. Once you’re happy with the arrangement, take the liquefied blackberry jelly and lightly spoon it over each berry (you can brush it with a pastry brush too, if it’s easier for you).  Then stand back and marvel at the beauty of your tart!

A Series of Unfortunate Trees