Bagels and Bustin’ a Move With People I Love 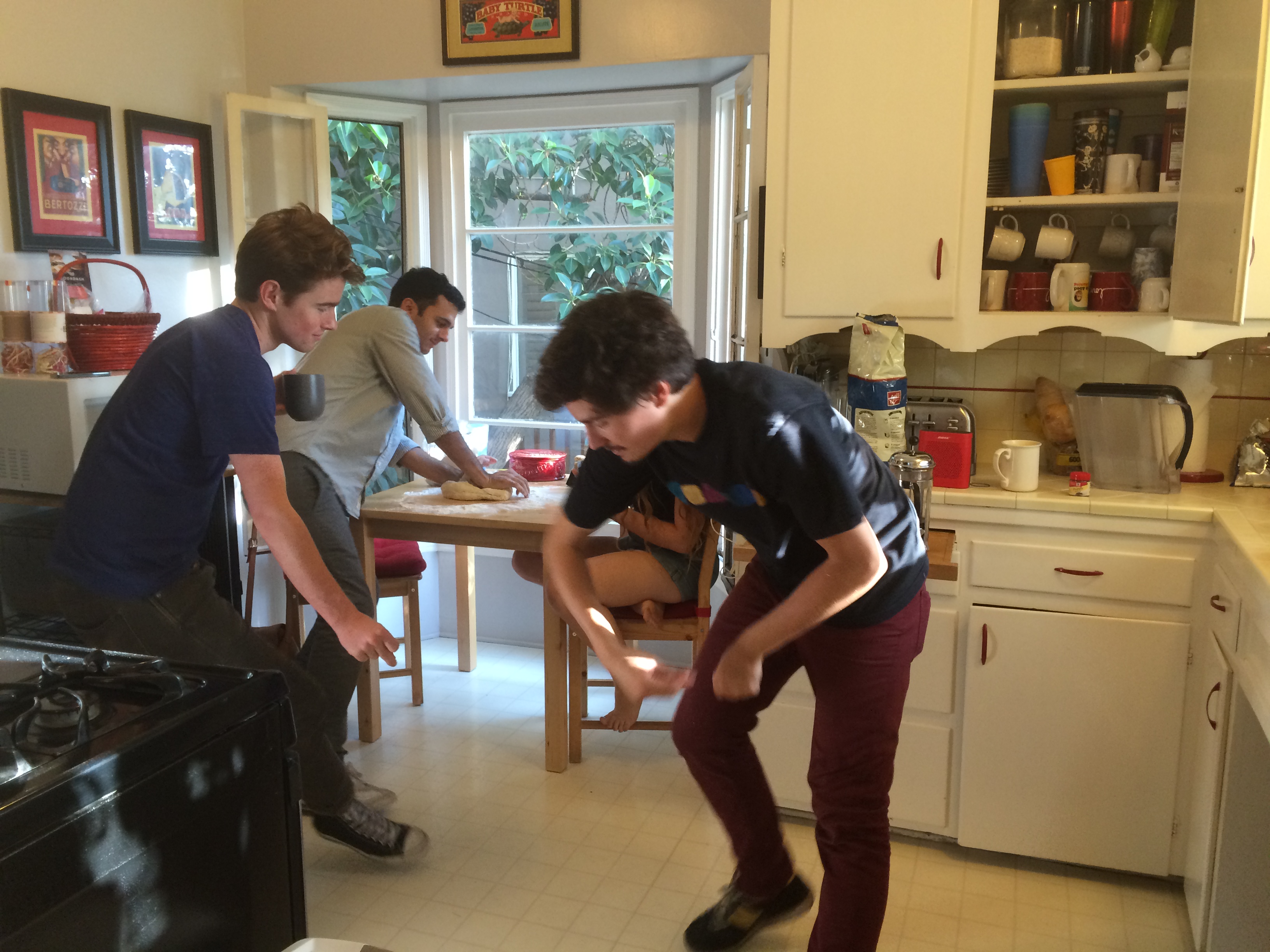 I love getting to know my kids friends and realizing there are no pesky serial killers or violent offenders to worry about.  They’re good kids who I enjoy hanging out with too.

I love them all, especially Reef, my daughter’s boyfriend, who entered sainthood the day he served as spotter — helping me pinpoint where my intestinally challenged dog had left lovely gifts on my living room rug. But recently I got to spend some time with my son’s friend Emil, who I hadn’t seen in months.

They’ve known each other since elementary school. Emil was one of those kids who could sit and have an intelligent conversation with you (at 15) without teenage awkwardness entering in. And now that he’s in his 20’s, he’s interesting as always, and HE BAKES!!!!!!

How could I not love him?  A couple of weeks ago, he and his friend, Alex stopped by for a visit. My house was messy, and they weren’t planning on staying, but it was near dinnertime and I love having people over, planned or unplanned, so with a little arm-twisting, they stayed.  We split the salmon I’d made, ate leftover chicken and veggies, and had a wonderful time talking about Emil’s new love of cooking and baking.

Glistening orbs of wonder baking away.

Emil was telling me about how he now makes bagels, which impressed me because I’ve never even made them, and I call myself a baker.

I love bagels. They lure you in with that yeasty aroma, then go in for the kill with carbs. That’s why I never make them, and rarely eat them. But, I figured one day of homemade bagels would be worth the extra notch in the belt, so we made plans to hang out on a Saturday afternoon and make bagel history.

I love this shot.

Emil found a good, simple recipe on a great website, called: Sophisticated Gourmet. It was easy and pretty quick — for a raised dough. If you ever want to thrill/stun your family on a Sunday morning, get up a few hours early and make these.  You will be worshipped.

The bagels passed the deliciousness test.

It’s not hard, but does take two to three hours. (Trust me, it’s worth it!) The recipe is below, but here’s what’s involved:

You start by mixing the water, sugar and yeast.  Then add the dry ingredients, mix it together, and knead in the additional flour.  Knead the dough for about ten minutes, then place it in an oiled bowl (canola oil is fine) turning it over so it’s greased and doesn’t dry out. Then you cover it for about an hour, or until it doubles in size.

Then press the dough down  and let it rest another ten minutes. Divide it into small pieces, and start rolling them into balls. Just poke your finger through the ball and shape it into a bagel. Place them on a cookie sheet about 10 minutes, and cover them with a damp towel.

Boil for one minute on each side.

While they’re sitting, bring a pot of water to a boil, lower the heat a little and drop in a few bagels. Once they rise to the top, let them sit there about a minute, then turn them, let them sit another minute, then take them out with a slotted spoon. (If you prefer a chewier bagel, let them boil for two minutes.)

Place the bagels on a slightly oiled cookie sheet and turn on the oven to 425 degrees. Sprinkle them, or roll them in whatever toppings you want. We used toasted sesame seeds, poppy seeds, salt, and garlic salt. You could even mince some garlic and mix all those ingredients together with caraway seeds for an everything bagel. We used cheddar cheese too, but Asiago cheese,  is another great topping, as are caramelized onions. Just get crazy with creativity. Wonder if a cinnamon-sugar bagel would be good?

Andy bustin’ a move in my tiny kitchen with Reef.

Let them bake for 20 minutes and they’re done!

As we were rolling the bagels into little balls before

poking a finger in to create the doughnut shape, we had some coffee which spurred the bagel makers to spontaneously bust out some impressive dance moves. I always thought it was beer that made great dancers, but caffeine is a close second.

Who doesn’t love a man who sweats bullets for his butter?

Then Emil wanted to make homemade butter.  So he put some heavy whipping cream in a bottle and shook it for at least 10 to 20 minutes. Poor guy was breaking into a sweat, since L.A.’s been about the same temperature as Mercury lately.  But the butter turned out light, perfectly salted and yummy.

Not perfect, but really yummy.

The bagels were fantastic! We used five different cream cheese spreads, along with lox and everyone was so happy.

Overall, it was a fantastic day, and another reminder to me that you don’t have to be a billionaire or have a state of the art, immaculate kitchen to be happy. A tiny, well-used kitchen and a few passionate, caffeinated, dancing bagel makers is more than enough.

3. Pour half of the remaining warm water into the well. Mix and stir in the rest of the water as needed. Depending on where you live, you may need to add anywhere from a couple tablespoons to about ¼ cup of water. You want to result in a moist and firm dough after you have mixed it.

4. On a well-floured countertop, knead the dough for about 10 minutes until it is smooth and elastic. Try working in as much flour as possible to form a firm and stiff dough.

I love the feeling of dough!

5. Lightly brush a large bowl with oil  (we used canola) and turn the dough to coat. Cover the bowl with a damp dish towel. Let rise in a warm place for 1 hour, until the dough has doubled in size. Punch the dough down, and let it rest for another 10 minutes.

6. Carefully divide the dough into 8 pieces. The original website used a scale, but we just eyeballed it. Shape each piece into a round. Now, take a dough ball, and press it gently against the countertop (or whatever work surface you’re using) moving your hand and the ball in a circular motion pulling the dough into itself while reducing the pressure on top of the dough slightly until a perfect dough ball forms. Repeat with 7 other dough rounds. (Don’t try to cheat like I did and fold any extra dough under because the bottom of your bagel will look horrible and the top will be perfect.  Just roll the perfect ball and poke your finger through.)

7. Coat a finger in flour, and gently press your finger into the center of each dough ball to form a ring. Stretch the ring to about ⅓ the diameter of the bagel and place on a lightly oiled cookie sheet. Repeat the same step with the remaining dough.

The bagel master tastes his creations.

8. After shaping the dough rounds and placing them on the cookie sheet, cover with a damp kitchen towel and allow to rest for 10 minutes. Meanwhile, preheat your oven to 425ºF / 220ºC / Gas Mark 7.

9. Bring a large pot of water to a boil. Reduce the heat. Use a slotted spoon or skimmer to lower the bagels into the water. Boil as many as you are comfortable with boiling. Once the bagels are in, it shouldn’t take too long for them to float to the top (a couple seconds). Let them sit there for 1 minute, and them flip them over to boil for another minute. Extend the boiling times to 2 minutes each, if you’d prefer a chewier bagel (results will give you a more New York Style bagel with this option).

10. If you want to top your bagels with stuff, do so as you take them out of the water. The original recipe said to use an egg wash brushed over the bagels to get the toppings to stick. We didn’t do that with all of them, only a few.

11. Once all the bagels have boiled (and have been topped with your choice of toppings), transfer them to a lightly oiled baking sheet.

13. Cool on a wire rack. (Our bagel bakers were so ready to eat these, they dived right in while they were warm and delicious!)

The bagels passed the deliciousness test.

The Chocolate Chip Off Part Deux