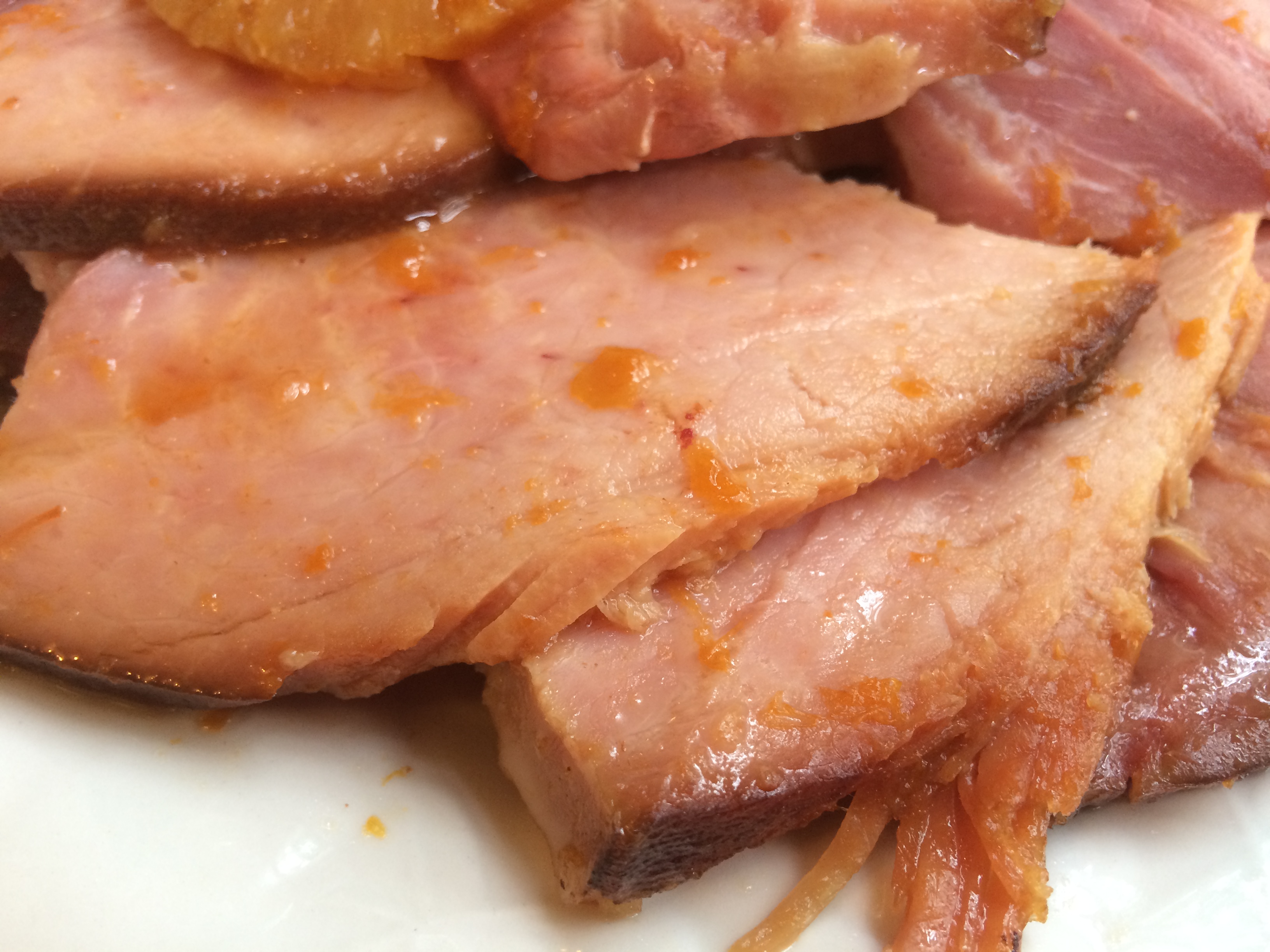 Cleanser is sprinkled in my bathroom sink, toilet, and bathtub, waiting for me to scrub things clean. Boxes are filled with Christmas decorations, stacked neatly by the attic door,  expecting to be put away. My bedroom, which looks like gorillas have been living in it, wails every time I walk through.

So what am I doing?  Writing about ham. And yes, you read that title correctly, it’s hamicide.

I just finished slicing some leftover ham to put in the freezer, and my rapture over how good it was is a little scary.

I know, it seems as though my love for pork knows no bounds. That’s true, although I do draw the line at fried pork rinds. And, no, the National Pork Producers Council is not paying me to say this, but the thing I love most about pork is that you can go so many directions with it:  Slow Cooked Pork Smothered in Sauerkraut, Stuffed Porkchops, Herbed Juicy Pork Roast, Pork Adobo, Pulled Pork, Split Pea Soup with Chunks of Ham — the list goes on and on. But today it’s Sweet Glazed Ham with Pineapple and Apricot Preserves I want to talk about.

Pineapple and ham, the perfect combination.

Years ago, my mom made ham with cloves, pineapple, Maraschino cherries, brown sugar and preserves, and slow-cooked it for hours, usually on Sunday mornings while we were at church.  I think a lot of people cooked it that way in the ’60s. Hers was great, so I took the recipe, made a minor tweak or two and  it still gets rave reviews today. It’s that slow cooking thing, it makes pretty much everything irresistible. HoneyBaked has been slow-cooking ham for years.

I am going out on a limb and  boldly stating that my mom’s ham is every bit as good as HoneyBaked and therefore hamicide is not necessary. That’s when your family goes to great lengths to destroy the store bought ham you brought home, so they can have a HoneyBaked ham.

HoneyBaked Ham is great, but I can’t afford it. So, instead, I wait until ham is on sale, buy an eleven dollar Farmer John half-ham, cook it and enjoy it and the leftovers for weeks. The ingredients are inexpensive and most people have them on hand anyway, so instead of paying the big bucks, make one yourself. As far as spiral slicing goes, that’s a great thing,  and probably worth it if you’re affluent,  in a time crunch, and throwing a party. But nothing sends me into raptures like a thick slice of juicy ham, so I’m a fan of slicing it myself.

If you know nothing about ham, here is a link to a blog that explains things like the difference between a shank end and a butt end called My Gourmet Connection. I also love that after you bake a ham and eat the leftovers for a couple of days, you can freeze the rest and reheat it and it’s great.  Plus, you can save the meat-laden bone and make amazing split pea soup with it.

And here’s a little ham trivia for you.   I was the voice of HoneyBaked ham here in California in 2006 or 2007.  I even wrote some local radio commercials for them called “Hamicide.” I thought they were darkly fun – but the owner chickened out on using them. You may recognize my voice and my kids voices in the spots. (And I wonder why they have twisted senses of humor.)

I think all my introspection at the beginning of the year left me realizing that self-knowledge is nice, but knowing a great recipe for ham might be even nicer. Plus, it will save your family the tragedy of hamicide.

This is what your ham will look like before you cook it.

1 fully cooked bone in half ham   (I prefer the butt portion) They’re usually 5 to 10 lbs.) I use Farmer John because they’re local here in So. Cal.

6 to 8 slices of canned pineapple packed in juice

1/4 cup juice from the canned pineapple

6 to 8 Marachino Cherries  and about 1 oz of juice

Remove the ham from the plastic packaging.  Don’t forget to remove the plastic plug they put on the end of the bone covering the marrow.  Get a large roasting pan and line it with lengths of heavy duty foil  so that it will completely cover the ham while it cooks. (I use Reynold’s wrap.) With a paring knife, make three rows of small slits on the top of  the ham at one inch intervals. Press the cloves into the slits using about 15 to 20 cloves.

Then take each pineapple ring and place it on top of the clove-studded ham. Secure each slice in place with a toothpick. (Be sure to remove them when you serve the ham!)

Take the brown sugar, hold it in your hand and press it against the top of the pineapple, clove studded ham, so it creates a crust about half an inch thick.  Then mix together the apricot preserves, the pineapple juice, the cherry juice and the Rock N Rye.  It should be liquid enough to pour over the ham. Pour it over the brown sugar topped ham. It will drip down, but that’s OK.

Cover the ham securely with the aluminum foil and bake it in a 350 degree oven for at least 3 hours.  If you go four hours, that’s fine.  It will still be juicy and fantastic. Remove the toothpicks, slice and serve it. (You might want to remove the cloves also, if you want – or just warn guests they are there.) There will be plenty of juice at the bottom of the pan, so collect some so guests can drizzle it over the top of their ham slices.