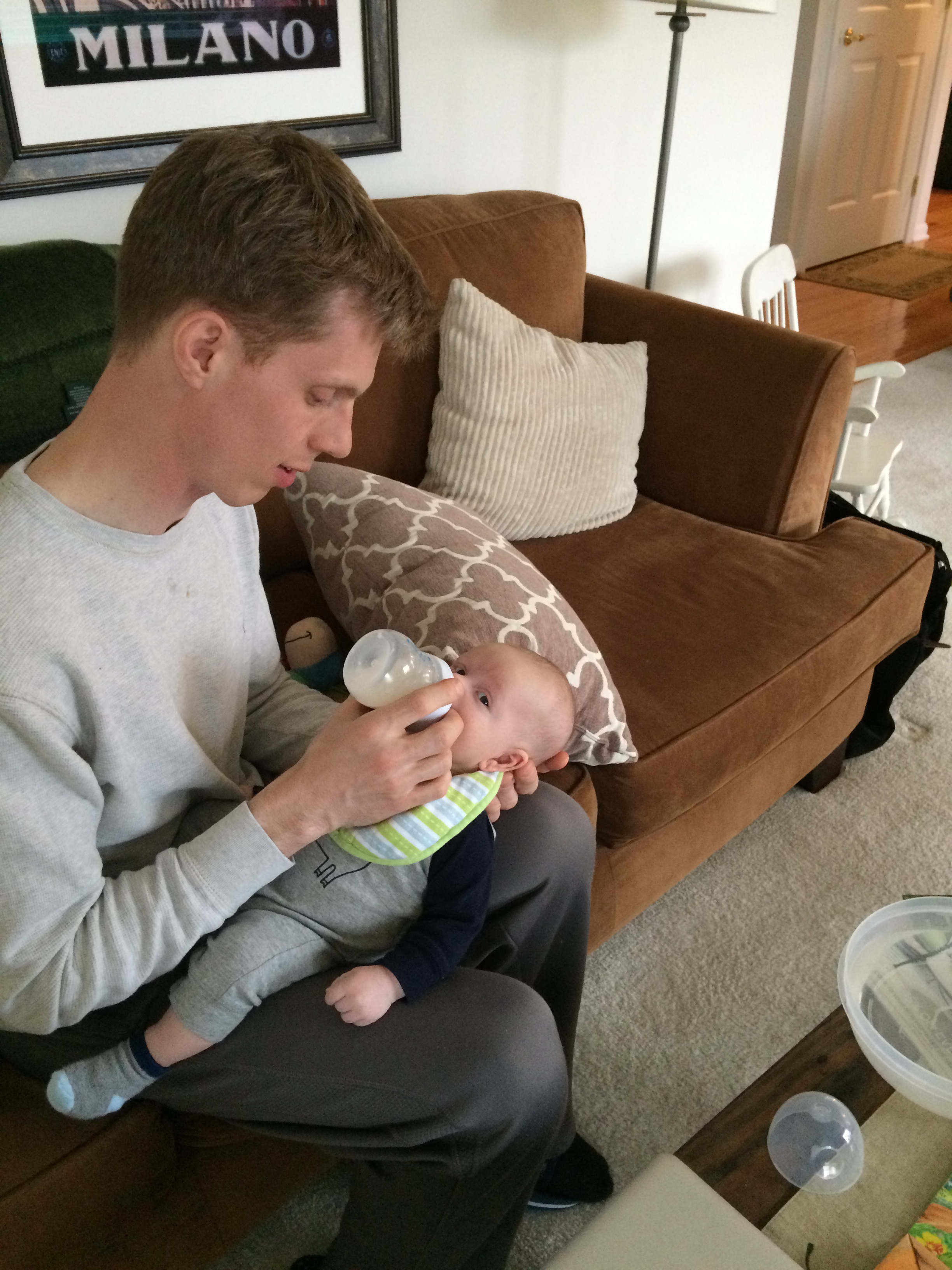 Bianca, Patrick, and Alessandro, their new baby, who will undoubtedly speak Italian one day.

I think a 93-year-old is inhabiting my nephew Patrick’s body. He sings Italian songs to his newborn son, plays Italian folksongs on his phone, makes homemade pasta, and goes out of his way to stay in touch with relatives, both here and in Italy, because he values family more than anything. Call me crazy, but this doesn’t seem like a typical 36-year-old.

I know this because I just spent a few days with Patrick, his wife, Bianca and their new baby Alessandro. I went to help them because, if ever people need help, it’s when they’re dealing with a newborn. The sleep deprivation and exhaustion leave you more zombie than human.

Patrick tormenting his grandmother with Groucho glasses at my wedding.

No one would have ever guessed Patrick would turn out this way. As a kid, he gravitated toward anything he wasn’t supposed to be doing.

My sister-in-law used to say, “He’s just busy,” which is the greatest euphemism for a kid with insatiable curiosity and boundless energy, I’ve ever heard. He went after pretty much everything with absolute fearlessness. First time skiing?  That didn’t matter, he just barreled down the hill and figured it out as he went.

Patrick and a ceramic dog on top of a sleeping Uncle Bernie.

In grade school he was small and wiry, and wore glasses with large frames that made his face look even smaller. He was full of snappy comebacks and surprises, like the year he put on a curly, red wig and transformed himself into Orphan Annie for Halloween. My brother, Bob just shook his head and smiled.

Patrick and I have a lot in common. We were both born with  the ham gene, so we were in lots of plays in high school, we both love to sing, love languages, and share a ridiculous sense of humor.

Just like I reached out to family when I moved to California because I missed everyone so much, when Patrick studied abroad in Italy, he reached out and stayed in touch for the same reasons. I feel like we’re weird, kindred, old spirits.

When Patrick was 12, their family went on vacation to Italy and visited our relatives in the tiny town of Roio Poggio near L’Aquila. Patrick took notes in a small notebook while he was there and brought it back filled with hysterical adolescent insights.

But I think he brought something else back with him — the soul of my Grandfather, Bernardo.

Bernardo was ambitious and hardworking.  He had a dream of

My father’s family minus Uncle Sesto, Uncle Richard and Aunt Sara, the three not born yet. My dad and Uncle Fred are the two on the right.

bringing his entire young family to the United States in the early 1900’s and even became a citizen to do so. The plan was to come to the U.S., work,  make money, then go back to Italy and bring more kids over.

But there were two problems with this plan. Every time he came back to Italy, he gave my grandmother the gift of another child – hence more to bring back.  Problem number two — it was an expensive trip. So he could only afford to bring two kids at a time. On the first trip, he brought my Uncle Fred and my father. They were both teenagers at the time. My dad was just turning  14 and Uncle Fred was only a few years older.

Unfortunately, they made the trip just before the stock market crash of 1929 which began on October 24th, my father’s birthday. Talk about horrendous timing.

It would be at least three years before my grandfather could afford to send my dad back to Italy to see his family. He eventually scraped together enough for a round trip ticket, but my dad didn’t want to leave Italy once he returned. It was his home. His mother was there, his brothers and sisters were there, he didn’t even care that they were poor. He was happy.

Dad’s photo with proof he was disinfected and clean before departing Italy in 1934. He was not happy to leave.

But, ever pragmatic, my grandfather told my dad he had to come back to the U.S. because he would waste half of the round trip ticket if he didn’t. So, my father left Italy again, wearing a watch his mom had bought him so he would look successful. He  remembered his mother running tearfully alongside the train as it pulled away. That was the last time he ever saw her.

Then the war raged for years and my grandfather’s dream of uniting his family in the United States started fading.  His children grew older, found spouses and settled down with jobs and lives of their own. Only one of my uncles, Uncle Richard, decided to join his two brothers and seek his fortune here.

My grandfather went back and forth for a while, he even lived with our family in New Brighton for three years, sharing a room with my brothers. I was only three when he left but my earliest memories surround him. I remember he loved it when my brothers played their accordions — well, at least when Bernie played.  When Bob played, his music teacher used to say, “I die a little every time you play.” And they tell me he used to push me on the swing and let me write on the back of his t-shirts with crayons.

My dad wrote letters and maybe once a year they would call on the phone and talk for five or ten minutes. My father visited Italy in 1963, after being away for 30 years, and saw his dad for the last time. My grandfather passed away in Italy at 93.

But you know how stubborn Italian men can be when they have a dream. So, I think my Grandfather sneaked his soul into Patrick when he visited Italy. He was very sly, doing it gradually so no one would notice. Eventually, Patrick took some Italian classes in college, then decided to double major in Business and Italian. He went on to study in Italy and even got his masters in business there.

While there, he honed his Italian skills and his cooking skills, lived with family, and got to know his uncles, aunts and cousins incredibly well. So well, that when Patrick got married a year and a half ago, 14 of them made their way to western Pennsylvania for the event.

It was  the largest number of Tunno’s ever assembled in one place since…well…ever. And quite frankly, I’m convinced my grandfather had something to do with it.

Patrick and Bianca at their wedding reception, along with the mostly reunited Tunno family.