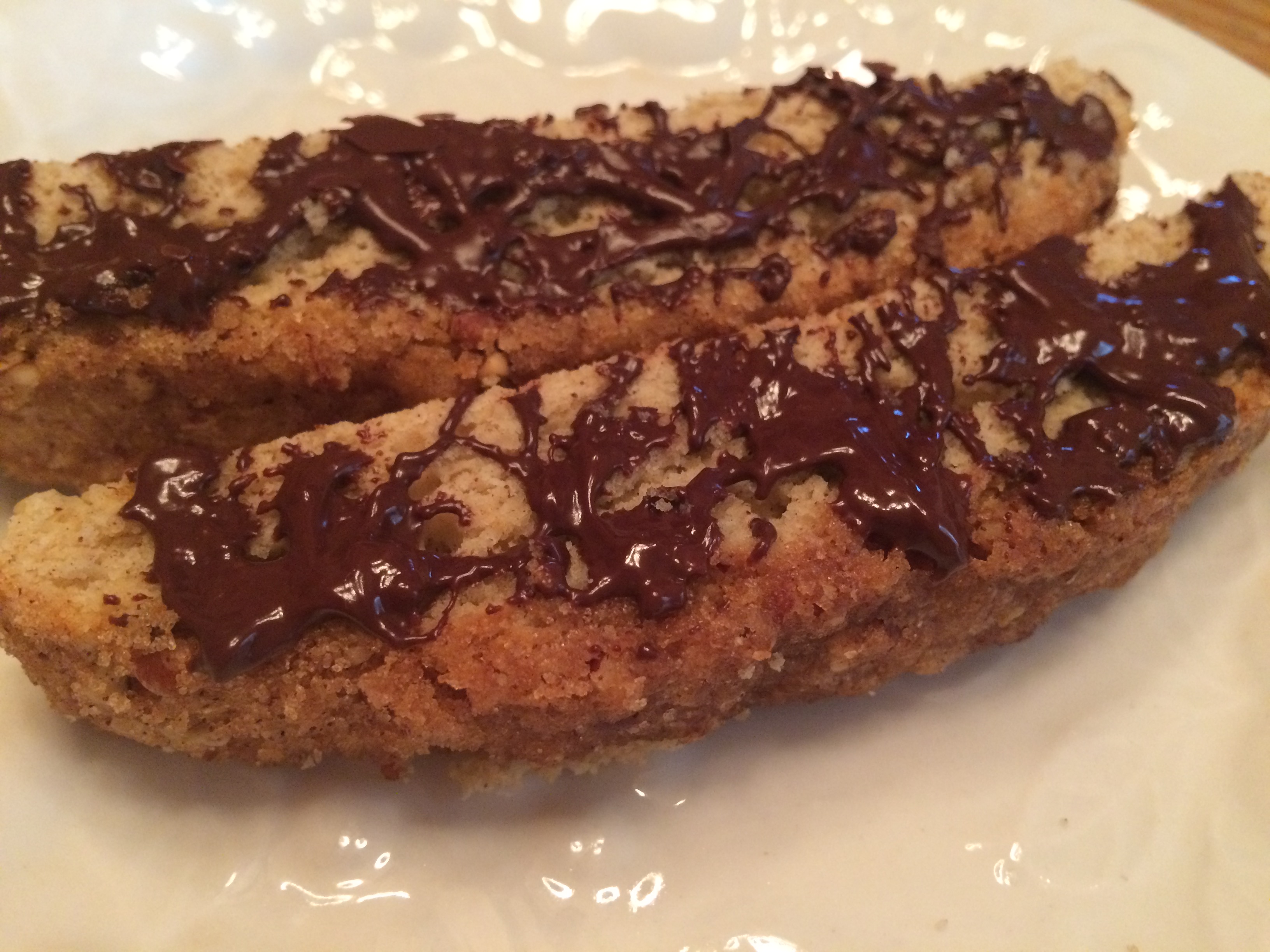 I have bounced around the idea of starting a biscotti business for over a year. My family rolls their collective eyes when they hear this because I flit from one idea to another like a fruit fly. I’d prefer to make my living writing, and/or writing about food, but I still love baking them.

Last year, when I was still in my biscotti biz frenzy, my friend Terry asked me to create something that tasted like coffee cake, but had a spicy chocolate drizzle over it.

I thought about it and came up with these. They must be great because even the kids loved them and they don’t usually get excited about biscotti.  Must be the sugar, spice, and heat — I used a Lindt dark chocolate bar with chili drizzle.

Here’s a link to my older post about Peanut Biscotti with lots of biscotti variations you can try.  For this one, I used my basic biscotti recipe and once the biscotti dough was spread out on the baking sheet and brushed with egg yolk, I pressed a mixture of brown sugar, cinnamon, pecans and butter on the top.  It’s really hard to dislike something when it’s covered in buttery brown sugar goo, and impossible when that’s drizzled with chocolate.

This is a great recipe for when you want coffee cake for a picnic or a brunch, but don’t want to deal with plates or forks.

This recipe made me yearn for actual coffee cake. I found a recipe on The Pioneer Woman’s website that looked pretty good. I’ll have to try it.

Keep this separate – it’s for brushing on top of the flattened biscotti logs BEFORE BAKING — to help the brown sugar mixture stick, or for sheen.

Keep this separate also – it’s for pressing on top of the biscotti before baking:

3. (Optional- but I think they’re great) Add the chopped pecans.

4. Sift together the flour, baking powder and salt and stir it into the batter. The dough should come together in one big ball that’s easy to work with.   If it’s too sticky, add just a little more flour, if too dry just sprinkle a little water.

The perfect biscotti baking pan. No edges so nothing interferes with your cutting.

6. Lay each roll on a cookie sheet. (Flat ones with no edges are great for cutting the cookies once they’re baked- You can get them at Costco (when available) and Air Bake Cookie sheet at Bed Bath and Beyond.) Flatten the rolls so they’re about 4 to five inches wide, and round out the edges.

7. Then mix together the brown sugar, melted butter, cinnamon, pecan mixture and set it aside.

8. Brush the top of the flattened rolls with the egg yolk mixture (it makes the brown sugar stick to the biscotti).

9. Take the brown sugar mixture and spread it evenly, on top of the biscotti  you just brushed with the egg yolk mixture. Press it down lightly so it sticks.

11. Remove from the oven, slide spatula under flattened rolls to separate them from the cookie sheet, and cut each roll into 1″ slices.  Then carefully lay each biscotto cut side down on the baking sheet and return to the oven.  Lower the heat to 325 and bake for 15 minutes more.

10. While they’re cooling, melt 1 bar of Lindt Dark Chocolate with Chili (you can find this at most grocery stores) in the microwave.  When it’s melted and the biscotti are cooled, drizzle the chocolate on one side of each biscotto.

11.Let them cool completely, so the chocolate hardens, and store them in a sealed container in a cool dry place, like the refrigerator.

The Chocolate Chip Off Part Deux