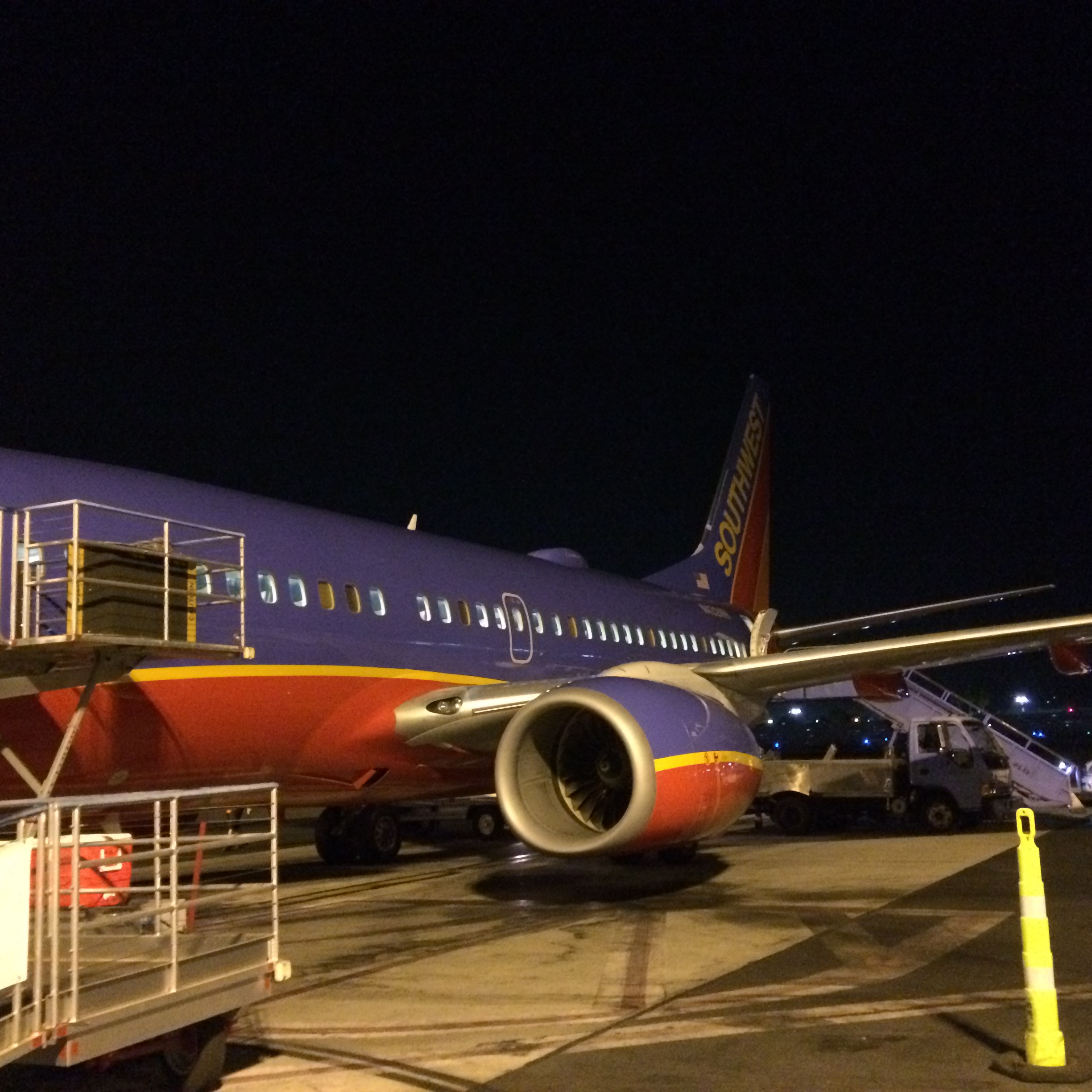 Bob trying hard not to look like a pointy birthday hat kind of guy.

Last week my sister-in-law flew me back to Pennsylvania to celebrate my brother Bob’s birthday.  (I am lucky beyond belief to be part of this family.) I do have a photo of Bob in a pointy birthday hat, but I’m not posting it because I’m fairly certain he will hunt me down and kill me if I do. But, I’m keeping it in case blackmail is ever necessary.

I got in some great bonding time with family, including adorable great nephews and nieces I never get to see. And I ate too much — again.

The flights were mostly uneventful, although I did have the good fortune to sit beside a very entertaining guy, named Fred,  who sells nitrile gloves.  They’re like rubber gloves only better, especially if you’re allergic to latex. Fred said he would send me some gloves that would protect my fingers when I went blackberry picking and he actually did!  Now I have cool red gloves and can’t wait to head into the brambles.

My family was only a little concerned when I pulled one of Fred’s blue nitrile gloves out of my purse. If you’re a surgeon, a blackberry picker, into kink, or an axe murderer with a latex allergy, here’s a link to Fred’s site:  QRP Gloves and Fingercots.

On the way back, I was lucky enough to run into my brother Bernie and his wife Donna at the airport.  They bought me a glass of wine and a proscuitto sandwich at this cool little Italian store at the Pittsburgh airport. (God love them!) I never even knew the place existed, but Bernie’s internal GPS (Global Proscuitto Sensor)  can sniff out an Italian store no matter where on earth he is. It’s his sixth sense, which proves he is my mother’s son.

It was a good thing I had the wine because I needed it on the final leg of my flight from Las Vegas to Burbank. A ridiculously drunk young man  in front of me kept hitting on the girl beside me, who was dressed in a skimpy hot pink dress and heels. I leaned toward the girl and told her this was one of those times I was thankful I was too old to be noticed. The drunk guy was so drunk, he sloppily peered around the seat to see if I warranted any attention, then drunkenly turned away, disproving the theory that everyone is beautiful if you’re drunk enough.

Then we took off with a loud, visible, too close for comfort, thunderstorm in the distance. It felt like the plane was being batted around by a giant toddler who just wanted to have fun.  I kept seeing lightning flashes, and the pilot announced he was sorry, but the flight attendants would not be able to serve refreshments due to turbulence.

I kept repeating to myself,  “God, please don’t let us die…I have way too much left to do.”

After the first 20 minutes, the plane climbed above the clouds, the toddler stopped batting at our plane, the stars were dancing, the drunk fell asleep, and life felt possible again.

Southwest Flight 2810 safely on the tarmac in Burbank.

When I got off the plane, I looked at it on the tarmac and thought, that could have ended really badly. Lightning could have struck and caused something to malfunction — although this story in the Washington Post says that improvements in plane construction mean that seldom, if ever, happens.

But it made me think about the pilots who do this work every day.  Taking off in ugly weather, because schedules are everything in air travel, must be scary as hell. When I think of all the flights I’ve been on where there was turbulence, or lightning, wind, snow, or ice on the wings that had to be removed, I realize how lucky I’ve been to have had such good pilots and how I take them for granted.

So, although (thank God) this was not a “Sully” Sullenberger moment, I’m dedicating this blog post to you two pilots of Southwest Flight 2810, departing Las Vegas Monday, August 22, at 8:05 p.m. and arriving in Burbank at 9:05 p.m. I just got a response from Southwest saying that Captain Lewin was responsible for our safe flight and landing. But I’m sure his co-pilot helped. (And just in case you ever happen to read this, Captain Lewin,  I really was OK with no beverages.)

The pilots are behind those little windows somewhere.

I tried to get a shot of you from outside the plane, but I couldn’t get close enough. I wish I’d had the presence of mind to try to meet you and thank you in person for allowing me to continue to enjoy my family and live my life. I would have loved to post your photos and give you both a big hug.

You don’t get called a hero for doing your job well every day, but you are both heroes to me because your skill and a little bit of luck made that flight uneventful. They say any flight you walk away from is a great flight and I heartily agree. I applaud you and all pilots who do a fantastic job keeping us safe day after day.  Thank you so very much!

If You Can’t Breathe…