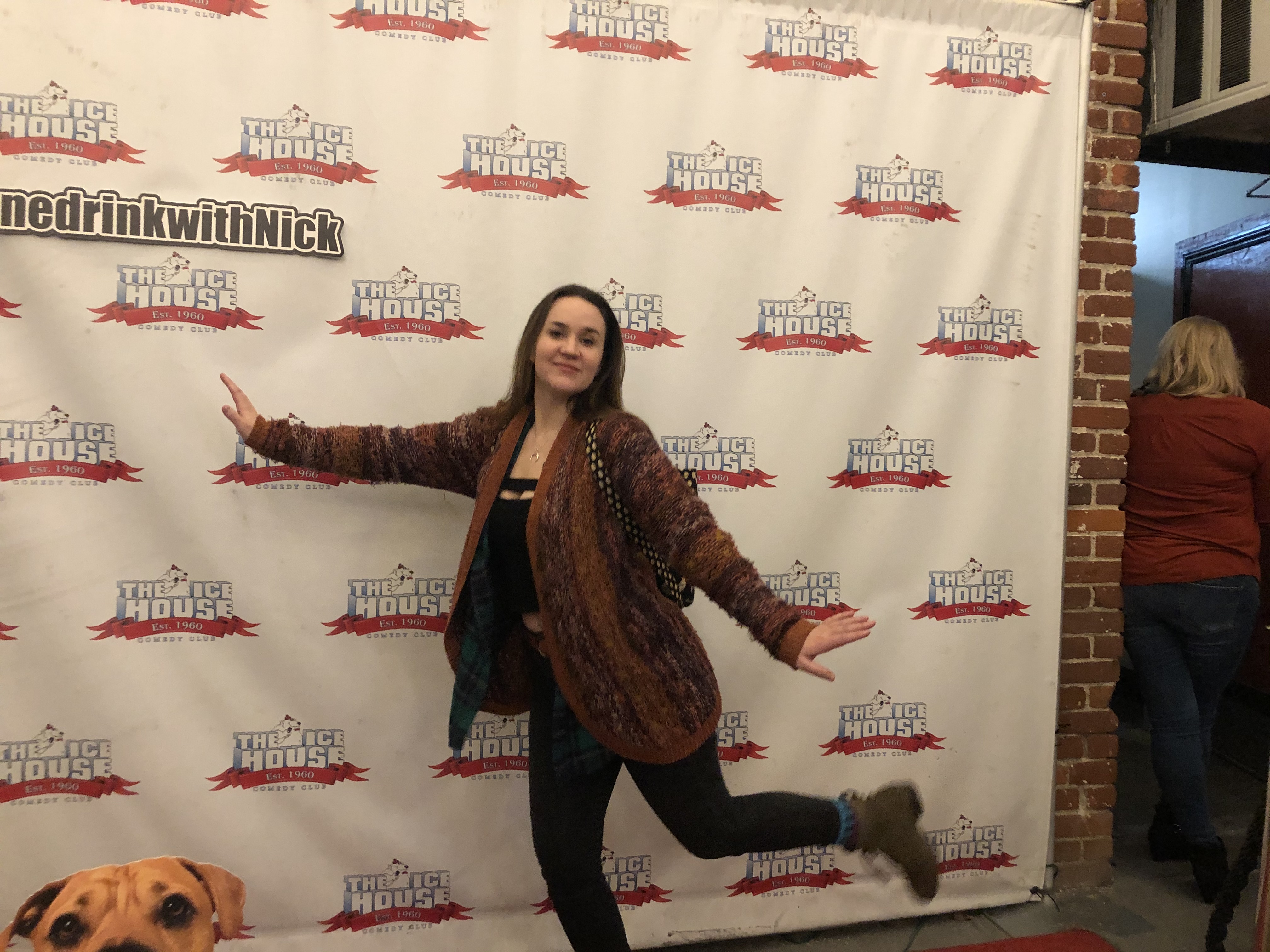 One of my son’s best friends growing up, was a girl named Sarah King. They were peas in a pod, both bright with a lot to say. Sarah is the child of two former actors, so it makes sense that she has the performance bug too. Lucky for those of us who still live in LA, she was performing a comedy skit at the Ice House in Pasadena.

I couldn’t wait to go and cheer her on because she feels like one of my kids. When you live in a neighborhood, like we used to, where we nurtured kids by reading to them at school and helping run theatre groups where they could perform, we all felt a little ownership.

I also wanted to go because I always thought it would be fun to be a comedian. My friends all used to tell me I was funny and should do it, but I was too chicken. One heckle and I convinced myself I’d have run off stage crying. So, it was fun to watch Sarah tackle it head-on and completely charm the crowd.

It was especially cool because she was a last minute replacement and still knocked it out of the park. Here’s the line-up with her name penciled in instead of printed. I love that she was ready and went for it. So much of a performer’s success is being ready to jump at any time because you never know when your chance will come up.

She told the story of her starring role in a student film that, if I recall correctly, involved bestiality, her dressed in a very sultry chicken costume, and her character’s unfortunate demise at the hand (or some part) of a man who “loved” her to death. Then her character came back in the afterlife as a chicken specter.

Only she could take that story line and make you howl with laughter. She slayed it and the crowd loved her. Afterward I was talking to her mom, Patty, and said I had a feeling good things were coming for Sarah. She responded with, “Yeah, she just needs to get the breaks.”

And I thought, wow, you can tell this woman has been through the acting thing, because she’s so right. She and her husband, Marcus both were actors, they know how hard it is. I know it too because I have so many incredibly talented actor friends in this town. And the fact is, it’s not always the most talented people who become famous, it’s the lucky ones. The ones in the right place at the right time, who’ve honed their craft and are ready for their moment. There is definitely preparation involved, but so much is luck and the stars aligning.

It takes a lot of guts to do the comedy thing and I feel bad that I haven’t been to the Ice House to see other friends perform. There have been several who’ve done it, including a talented friend from work, Maggie Mayfield, who is there regularly. Support is what helps you keep going, so I will definitely be back.

So, Sarah, here’s to you! Congratulations on having the guts to go for it, doing the preparation, and giving a great performance. May the stars align and the roles improve from here on out. Break a leg!