And the Winner is…Drumroll Please… 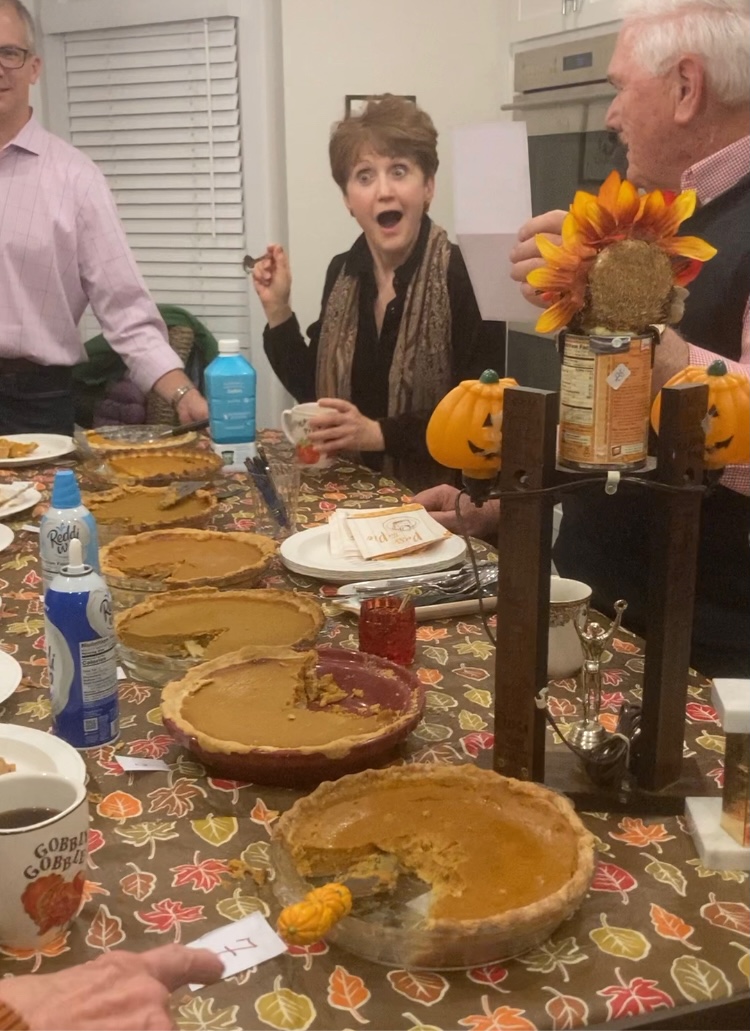 Some things are worth waiting for, like a perfect fall day, a job you love, and your turn to bask in the glory of winning the Annual Cutthroat Tunno Pumpkin Pie Competition! So, without further ado, I would like to proudly announce that the winner of this year’s competition goes to……………………………………………………………..

Yes, after more than 30 years I can finally claim the coveted trophy, created by brother Bernie from an old little league trophy that still says, Canfield, Baseball Club 1983 Minor Runners Up. (Proof that no matter what, kids were going to get a damned trophy in the 80s!) It has a turkey plopped on top of a can of Libby’s pumpkin, surrounded on both sides by two light-up jack-o-lanterns.

Brother Bob wanted to elevate the trophy, so he added the Latin words: “In coelo quies…” those three words are normally followed by the word est. It translates to: In heaven there is rest. He got it from his Phi Delta fraternity magazine, where they list deceased brothers under that title. Bob, being a math lover, changed the last word to the mathematic symbol for Pi. (3.14).

In Tunnospeak, Pi equals actual PIE. Of course, there will be pie in heaven, lots of it! And we’ll all be winners!

To see my moment of glory, captured on video by Chris Tunno, just click on this link: https://www.youtube.com/watch?v=fsSLivBvbTg

Or look at this photo and just imagine the rest. It was a rather Meg Ryan moment, a la When Harry Met Sally.

We think the competition started sometime in the late 80s, when my mom proudly announced “Oh my pie issa gonna be delicious…I made it witta nading but eggs.” That year, according to our spotty memories, Bernie also made a pumpkin pie, so naturally our competitive family decided to put it to a vote.

My mother, never one to back down from a challenge to her culinary authority, immediately started bribing her grandchildren with dollar bills to vote for her pie, which had a slighly greenish tinge because of the dozen or so eggs. (We’re guessing she was trying for custard.)We’d never have dared tell her her pie was not, “Da best,” but I believe we all secretly concurred that Bernie’s was, “da best.” And so a tradition was loosely born.

Back then, it was a much more laissez faire event. Rules did not exist, there was no trophy, or fanfare, and usually no bribing (unless you were Mom.).

As you may recall, our only dramatic upset came in 2003, when a non-Tunno pie was entered. It was innocent at first. Bernie and Donna’s friend Cindy said she’d made an extra pie and insisted Donna take it to Thanksgiving since Donna was tired and didn’t feel like baking. Donna asked Bernie to go pick up the pie, so Bernie did — big mistake. That act of kindness made him an accomplice.

That year, when Donna’s/Cindy’s pie won, Donna excitedly blurted out that it had been made by her friend, Cindy Uvena. (I think this is proof of her innocence since no bona-fide cheater would admit such a thing.)

When this treachery was discovered, brother Bob, grabbed a wooden meat tenderizer/gavel and called an emergency family pie meeting to order with a resounding whack on the counter. He questioned Bernie, asking what he knew. Bernie, who was several glasses of wine in, sheepishly admitted transporting the traitorous pie in his car.

My nephew, Matt, who had just come in second to an outsider’s pie kept yelling, “Who the heck is Cindy Uvena?”

Donna ended up with a three year pie suspension. Her accomplice, Bernie, got a one year suspension, and Matt had to live with the fact that he’d come in second to a non-Tunno pie.

Here is the roster of victors:

My favorite photo is of the trophy my great-nephew Nate made in frustration over not winning. Happily, this year Nate was a winner too, bringing home the newly created kid’s trophy. I get it Nate, I felt that pain for years, but finally things turned around. I guess there is hope for the world! And, yes, I promise I will post the recipe soon!

Please become a follower by clicking on the box in the top right of my blog. I need all the followers I can get. And if you like this blog, please re-post it! Plus, if you need some ideas for Christmas, here is a list of 15 great ones! Thank you for reading and have fun decorating for the holidays!