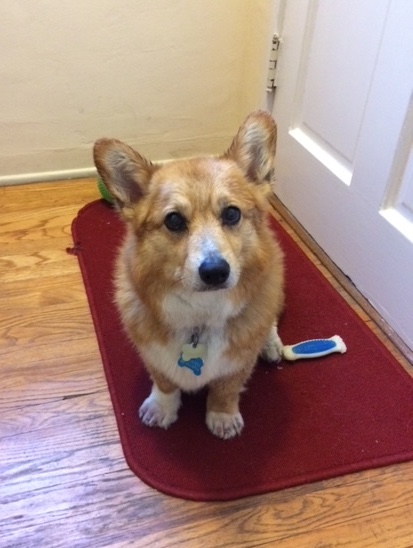 I am not a dog person. I like dogs, but am not one of those people who’ll risk her life stopping in traffic to save a dog I don’t know. My friend, Carolyn will do that. God bless her, I admire her bravery, but that’s just not me. That’s why it took me a few margaritas to start on the long road toward loving a dog, I never even wanted.

We were visiting friends at a cool, old beach house in Malibu in 2005 and our friends, Andy and Charen brought their adorable Corgi named Maggie. Margaritas were served, but there were no snacks to soak up the alcohol and after margarita #2, I was impervious to common sense.

Our kids were there playing with Maggie, and my daughter, Milena was smitten. The begging started with, “Can we pleeeeeeease get a dog like Maggie? She’s so cute.” It continued and continued.

My ex grew up with a Corgi and loved it, so he was completely sold. We already had a chocolate lab I never wanted named Cosmo, who had devoured my favorite, new, expensive, pink Victoria’s Secret panties and several Malibu lights, which had been firmly planted in our yard. I was not sold on having another panty/light eater in the house, so I balked.

But alcohol and whining kids have a way of wearing you down, so I gave in. I figured Andy and Charen, who lived in Montana, would never actually breed their dogs like they said they would, and if they did I could claim I was in an alcoholic stupor when I agreed. (Don’t worry, we finally ate and were sober on the drive home.)

A year later, we got word that Maggie had done the deed with a fellow Corgi named Harley and delivered several adorable pure breed Pembroke Welsh Corgi puppies. Andy called saying there were still a couple unclaimed puppies and asked if we still wanted one. The runt of the litter was an adorable golden brown puppy they called Peanut.

Milena saw his photo and was smitten. So, we decided we needed a family road trip to Montana to retrieve this new offspring. I felt like the clueless character you see in too many Hollywood movie plots who ends up with a child after a night of debauchery.

As soon as we walked through the door, Peanut came charging out with a red ribbon on his neck and couldn’t have been cuter. He jumped all over us with irresistible puppy energy and with one lick we were smitten.

So, after a wonderful visit with Andy and Charen in Montana, where every vista looks like a postcard, we sat Peanut in the back seat with Anderson and Milena and took off for home.

For a puppy, he didn’t cry much on the way home, but I do remember him putting Anderson in his place when he got in the little dog’s face and invaded his territory. We named him Topper after an old 50s TV show, which was apt because he was the top dog, no matter how big the other dog was. He, at about 25 pounds – fully grown, and Cosmo, at about 90 pounds, had a few run-ins but Topper never backed down.

When we got home, it was clear Topper would get no training unless I did it. I urged/dragged him up the street because he was terrified of cars and loud noises I forced him to face his fears. Treats and a little discipline worked and we became walking partners.

Even when I was young and at my very hottest, I never got as much attention as Topper. He was a people magnet. A Corgi specimen so perfectly proportioned you’d swear he was a stuffed animal. And he was so fast we named him Topper Banana Lightning Mills. Those legs may have been short but he more than made up for them with his speed, catching at least one stunned squirrel (that we had evidence of).

A couple of years later, after I filed for divorce, Topper became part of my therapy. We walked the streets of Glendale in the evenings when I just needed to get out and talk on the phone to anyone who would listen. And two years later, when I moved across the country after the divorce, I ended up with both the dogs I never wanted. Cosmo didn’t do well in the cold, so we shipped him back to my ex in So Cal where he ended his days quietly in the warmth of southern California.

Topper spent his days running in my dad’s park-like Pennsylvania yard chasing balls my father threw. “Perky , go get it!” my dad yelled as he threw ball after ball, never remembering Topper’s name. Topper, not caring what you called him, flew after the balls, until he grew bored with the routine. Then he’d look my dad squarely in the eye, abruptly turn, and prance right into the woods where he was not allowed to go. No amount of yelling or threats could get him to turn back. (Clearly my training fell a little short.) When he did return, he usually reeked of sewage from the creek deep in the woods and ended up in the tub.

Topper returned with me to So Cal where he was happily adored by Andy, Milena and their friends. He was a champion paw giver, (click on that highlighted phrase to see) and photogenic eye candy for every dog lover out there. He let the kids wrap him in blankets, make movies with him, hold him in the most awkward of positions, and never got testy with them. Milena’s friends used to borrow him just to take him for a walk in the park because he was so cute.

He guarded us as best he could for a dog about a foot tall. He sat by my front door and jumped up to grab the mail that came through the slot in the door as if it was an armed intruder.

The kids grew up and left, leaving the two of us on our own. Topper and I grew old together, but even there he outdid me with seven years to my one. But at his last vet appointment in the spring, I was told his body was shutting down. He was 16 years old, which is 112 in dog years, so it was understandable. There was nothing I could do but try to enjoy him as much as possible and help him out when the pain became too much.

After years of never letting him on the couch, I put a towel down, and sat him beside me for my Friday night movie watching. One hand on him as he slept, the other in the popcorn bowl. I began taking more time to cuddle him when he whined and did what I could to comfort him. But there were a few times when he got me up at 2, then 3, then 4 a.m. when I was sleep-deprived and not so sweet because I had to get up at 6 a.m. I regret that now. He couldn’t help it.

We had to put Topper down a few weeks ago and I am still heartbroken over it. Milena came home to help me, thank God, because I couldn’t have done it alone.

She put it succinctly when she said, “Wow, now you really are an empty nester.” It’s true, Topper was my last “child.” The house is so silent when I walk in now. And I still have a little twinge of fright when I forget and think, “Oh I better get home so Topper can go out… then I stop myself, remembering he’s not here anymore. After sixteen and a half years, it’s going to take a long time before I’m used to it.

I got his ashes the other day and put them on his dog pillow in the corner because I feel like I still need his presence here. I didn’t think I’d find it comforting, but I guess any Topper presence is better than none. I thought I’d scatter his ashes in the places he loved to run, but I think I want to hold onto them for a while.

Topper proved to me that sometimes what you think you don’t want is the very thing you end up loving the most. Topper even inspired my friend Mandy to write the poem below, which sums it all up pretty sweetly. Farewell my wonderful companion Topper. You are missed more than I could have ever imagined…for a dog I never wanted.

Nothing quite prepares you,

And yet one must be strong,

And grieve when they are gone.

And grieve we must because we know

That is the way of love.

But grief does soften and what remains

Is all they brought to us.

The cutest puppy, the happiest dog, running in the yard.

The avid walking partner that worked you out real hard!

The friends he made, the travels he paved,

Your buddy all the way,

Through thick and thin and snow and wind,

Beside you till this day.

Be kind to you Fran and know it’s true –

Every hello has a goodbye.

Your loving gift to let him pass

With you both there by his side.

What couldn’t be more proper?

And that was you – you lucky boy,

Women Always Find the Good in Each Other — Garlic helps