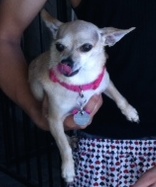 By now it’s well established that I can be a total dolt. I do things like buy tickets for Craig Ferguson, then confuse the date and show up two days after the actual show.

Topper checking on me with serious doubt in his eyes.

On my way out the door, I forget things so often, that poor Topper (my Corgi) stops and looks back at me every three steps as we go down the stairs because he knows I will turn back for  my phone, my keys, my sunglasses, the plastic bag or something else I’ve forgotten. God bless that dog.

And I do things like leave my computer at airports. My computer; the one thing I could not live without — with all my writing and everything dear to me in life, I just walk away from and don’t realize it until the next morning. I left it at the Burbank Airport about a year ago and they were kind enough to hold onto it for me at the Southwest Airlines counter. Then they made me show ID before they would give it to me. I love Southwest.

Well, last night I was returning home after a funeral, and did it again. I was on a concrete bench in the warm night air outside the Burbank Airport, waiting for my son to pick me up. As he pulled up I jumped up to meet him at the curb, grabbed my coat and purse, put my suitcase in the car and took off, completely forgetting my laptop in its carrying case, right beside me. I should just make DOH my middle name.

I came home, watched about five minutes of a documentary my kids were watching then crashed, never giving my Mac a second thought.

I got up this morning and went to the gym at 6 am, impressed with myself that I’m so disciplined and “on it.” I’m thinking, “The Success Principles” author Jack Canfield would be so proud. I got home and started going through mail and cleaning up. Then I got a phone call from someone who sounded young. He said his name was Henry Echeverria and he had found my computer. (He had also emailed me, but I hadn’t checked my email for an hour.)

My first thought was…Oh wow, I didn’t even realize I’d left it. Then, Uh oh, why didn’t this guy just turn it in at the airport? Why would you do that? He told me his address and I said I wanted to come and get it right away.  The address he gave me was in Van Nuys, California, which is mostly a working class section of L.A.

A million horrible scenarios played out in my mind:  I’ll be extorted, I’ll get mugged, he’ll go through my computer, find all my info and steal my identity. Then I thought, No, the kid just called me, gave me his name and address, why would he do that if he was a bad guy?

Then I countered with, Well, maybe that’s not really his name or address, maybe this is just a convenient set up. I pretty much completely freaked myself out. I asked my son to come with me just in case, which is like asking Billy Crystal to be your bodyguard. I figured, if he can’t intimidate them, maybe he can keep them laughing until I’ve escaped. I also scraped together all the cash I had which was 45 dollars, figuring I’d give it to them so they wouldn’t have a reason to rob me. And if he was returning it, then it would be a nice reward.

I told my daughter what we were up to and said if we weren’t back in an hour to call the police. Unbeknownst to me, my daughter had just been listening to a story on NPR about Amanda Berry, one of the women who was held captive and repeatedly raped in Cleveland for years, so to say she was on edge would be an understatement.

I left without showering after working out at the gym, hoping whatever stink I might have could ward off a mugging. My son hadn’t showered either; double stink couldn’t hurt.

So, we drove to the address Henry gave, which didn’t look totally inviting. I called him and I think he said something about his mom working at the hospital nearby and said he would be there soon. Now, I was really nervous, thinking this is probably not his apartment. There we were waiting for tough guys to stroll down the street and roll us in broad daylight.

Then the metal security door opened and I saw the sweet face of a tall, thin, innocent looking young kid, who’s maybe 15. He’s with a woman I recognized from my flight from Las Vegas to Burbank. She’s walking a Chihuahua and another dog and there’s another woman at the door, who I think was Henry’s mother.

Henry, me, and (I think) his aunt, plus Chihuahua.

Henry smiles and hands me the bag with my computer, which I didn’t even bother to check because I was so relieved. His aunt explained that she was at the airport waiting for her ride for two hours, so she was the one who must have seen my computer bag and picked it up for me.

I wanted to kiss each of them and I happily handed sweet Henry my last forty five dollars in cash, thanking them all profusely. As I was handing out cash, the mailman came along and the dogs went crazy barking, so we started yelling to be heard. Then, my phone rang. It was my daughter, who I couldn’t hear, so I said, “I’ll call you right back,” and hung up.

Of course my poor daughter was imagining me being stuffed into someone’s trunk, by a henchman with a vicious dog, and started freaking out. She texted in rapid succession,

“Call me back, now why would you hang up on me?”

“Is everything OKAY? I heard yelling.

“I won’t hesitate at all to call the cops.”

I’d already forgotten about her in my joy at being so pleasantly surprised by the kindness and honesty of total strangers. I asked Henry and his aunt to please pose for a photo with me so I could tell the world about this wonderful moment and they we got the great shot above, including the Chihuahua..

Then we walked away and my daughter calls again, frantic. My son explains what happened and I apologize for hanging up so abruptly, but now she wants to kill me. I try to make up for it by buying her french fries at In-N-Out Burger, which usually does the trick.  But when we got home she shot me the most poisonous look as I tried to hug her because I scared her to death. The good news is, at least I know she loves me. With more fries, she’ll warm up eventually.

But right now, I’m warmed by the fact that my belief — that we’re all one big family and most people are honest and good — is alive and well, even in L.A.

Wait, WHO is this again?

The Circle of Life — Already?

Carolyn - You Deserve These Peppermint Brownies!