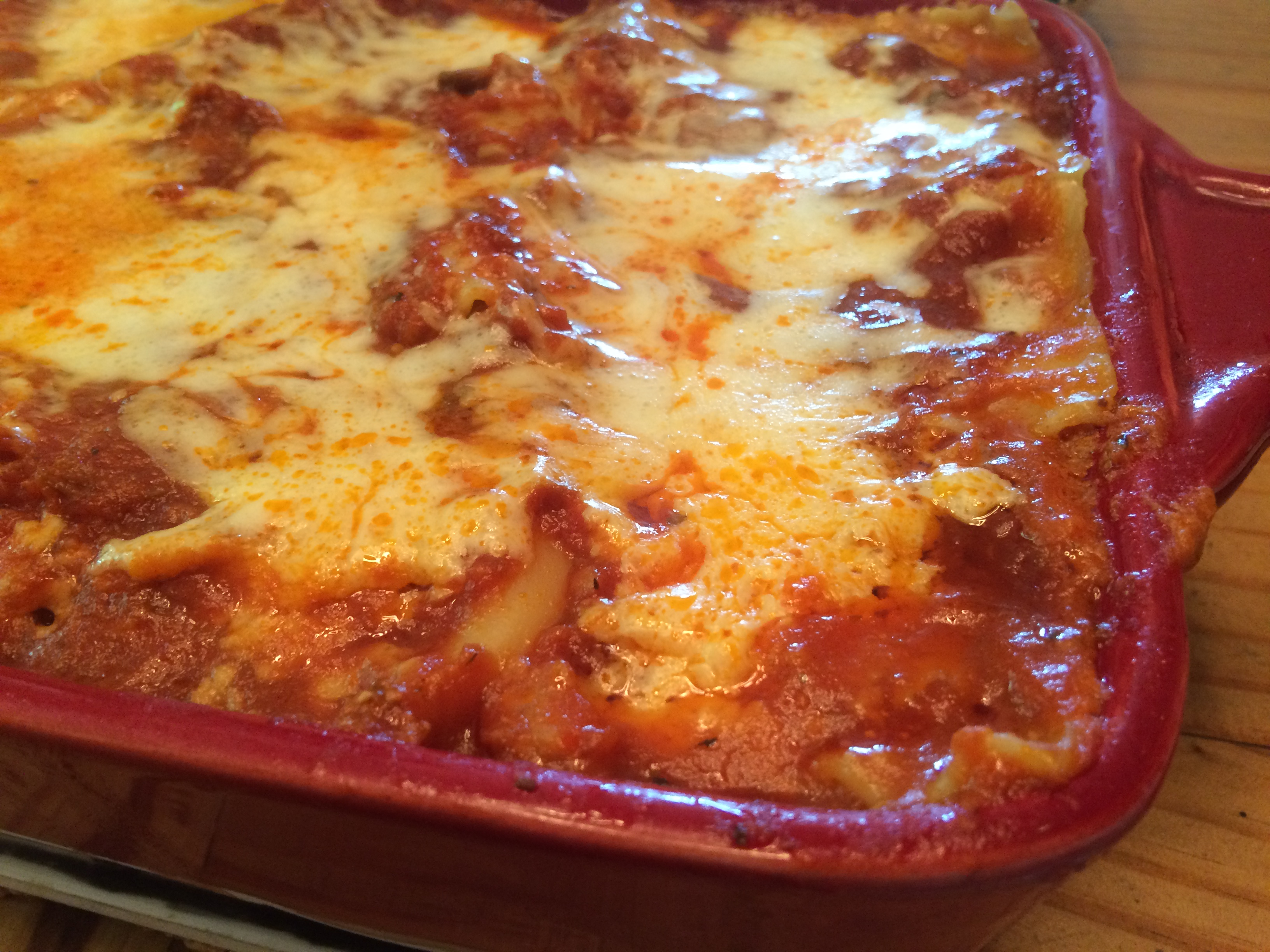 My kids were gone for a mini-family reunion at their dad’s house for the Fourth of July and I missed them, so I wanted to cook something wonderful when they returned. It was Sunday and my Italian soul longed for lasagne. It was just special enough that my devious plan, to get them (including my daughter’s boyfriend)  to stay for a meal, worked. Now that’s success. (See what my mother taught me? You bribe your kids with food.)

When you’re an ex, any time the entire group of kids is together and you’re not there, it’s hard. I have a step-son, who I don’t get to see for holidays anymore because he’s always with his biological parents and in-laws and that’s the toughest thing for me about divorce.

Brandon at about 4 or five. How could I resist a cute little guy like that?

Hell, he’s part of the reason I decided to get married in the first place. He was one of the best things about my ex. Brandon was adorable and four-years-old when I met him. He had blonde bangs cut straight across, the cutest personality and a great sense of humor. He always loved to draw and would sit for hours, creating horrific half-men, half-monster creatures with bulging muscles and evil looks.

My favorite memory of us is the afternoon we sat on the white linoleum kitchen floor of my tiny apartment and had a ferocious battle with his little plastic Star Wars toys. We tied Darth Vader with a chain and squirted ketchup on him so it looked like real blood when we murdered him.

Brandon’s a wonderful young man with a baby daughter of his own now and we do stay in touch, but I sure miss seeing him on holidays. So, I try to create a few days every year that are not any holiday and go visit him.  There’s no letting go of a child who you love and helped raise (even a little). The hardest thing is trying not to be a pest. I try not to insert myself in his life too much because he has enough parents, but I sure do love it when we connect and talk.

I don’t know how I went on so long about Brandon because this blog was supposed to be about lasagne, but kids have a way of doing that to you.

Lasagne is a labor of love and clearly, can also be used as a manipulation device. It’s even better when you make your own noodles, but I guess I’m working my way up to that much love.

For me, just taking the time to put together all the ingredients that go into it, is a major undertaking — so no homemade noodles yet.  (And I call myself a good Italian mother.)  If I ever start dating and tell you I’m making homemade noodle lasagne for someone, you’ll know it’s serious.

But I have to say the lasagne I made Sunday for my kids was pretty dang good, even with store bought noodles. Was it low cal? No. Was it low carb? No. Was it really good? Yes. Was it worth every stinking calorie? Definitely. (I tried it with grilled zucchini instead of the pasta noodles and that was also very good, so you could do that.)

The mozzarella melted on top, the sauce was just right, the sausage gave it great flavor, and the creamy ricotta made it wonderful, so I thought I’d share the recipe.

The key to lasagne is making the sauce ahead of time. I made mine last month and stuck it in the freezer. Sauce freezes really well. When you want to defrost it, just put it in a sauce pan over very low heat, put a lid on it and give it about 45 minutes. Make sure to stir it often so it doesn’t burn. The ingredients to my sauce are in my blog post from September of last  year, “Six Simple Words That Can End Your Life.” When my book gets published, I’ll cave in and share the exact recipe there.

If you don’t want to make your own sauce, you could use something from a jar, but I’ll never admit saying that because I don’t want to be haunted by the souls of angry Italian ancestors. Since lasagne requires a lot of steps, you might be forgiven for store bought sauce, like I hope I’m forgiven for store-bought noodles. (But I’d throw in a novena just to be safe.)

I use Italian sausage (removed from the casings) and crumbled. I cook it with a little garlic, drain it and set it aside. I use ricotta and mozzarella, some Italian seasoning, and fresh basil. Once all the ingredients are ready, it’s pretty easy to put together. And the leftovers are really good too — I’m eating some right now!

If you need a serious show of love in the future, try this recipe and let me know who you lure home.

You should have a nice deep lasagne pan. (I got mine from Williams Sonoma, it’s Emile Henry and I absolutely love it.)

12 lasagne noodles (I use DeCecco – you’ll only need 9 noodles, but cook 12 in case any break)

1 large container of whole milk ricotta (I use Galbani)

For lasagne, the best thing to do is get all your ingredients ready so you just have to put them together. So first, heat a large pot of water for your noodles. While it’s heating, cook your sausages.

Place the 2 chopped cloves of garlic in a medium skillet with the sausage that’s been removed from the casing. Cook it until the sausage is done but not crisp. Remove it from the pan and put it on a paper towel on a plate to drain.

Then mix the ricotta with one cup of the shredded mozzarella and add the Italian seasoning, the eggs, the fresh basil and stir to combine.

When the water is boiling, place your lasagne noodles in, one at a time, separating them, then carefully stir them so they don’t stick or break. Let them boil for about 6 minutes, so they’re not fully cooked when you take them out, but flexible enough to bend easily.

Pour 1 cup of sauce in the bottom of the lasagne pan. Spread it evenly, then place a layer of lasagne noodles on the bottom. (The pan I have fits three noodles along the bottom perfectly!) Then put about 1 1/2 to 2 cups of the ricotta mixture over the noodles. Spread it out so its even and sprinkle  1/2 to 3/4 cup of the loose sausage mixture over the ricotta. (You want just enough to give it flavor, but not so much that it’s overpowering.) Then sprinkle the sausage with 1/2 to 3/4 cup of mozzarella.

Bake for 45 minutes to an hour or until the lasagne begins to bubble. Remove it from the oven, let it sit about five minutes, then serve.  Serve it extra sauce, your kids will want it.

Five Bucks to Anyone Who Can Identify This