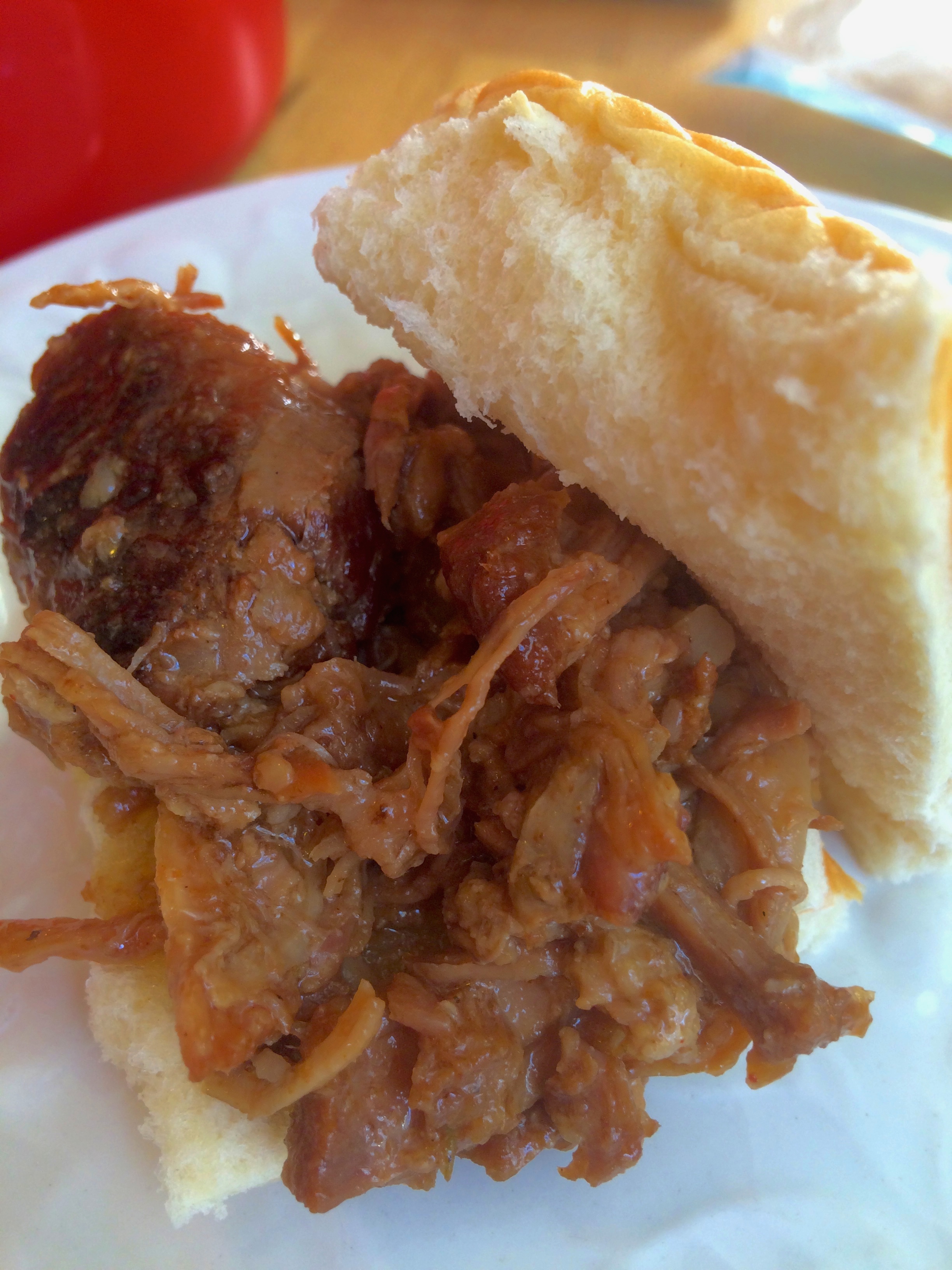 Few things bring me the uncontrollable joy of a juicy pulled pork sandwich. (Should a single woman ever admit that?) I know pork isn’t health food, but if you don’t eat something decadent every once in a while, where’s the joy in living?

Especially if, like me, you eat salads, chicken, vegetables and tofu. Yes, you can make them taste great, but there’s something wicked and exciting about eating something a little trashy. It’s probably like having an affair. You know you shouldn’t, but the pull is undeniable.  That’s why I have to be toweled off when I get to cook and write about melt-in-your-mouth pulled pork. It’s like the one night stand of foods.

Clearly, I’m a shameless pork addict. But, from what I’ve read online, and seen on Food Network Cooking competitions, most pulled pork recipes can take from four, to ten, to 24 hours to make.  Some recipes tell you to smoke the meat, or rub it with special rubs, let it sit in the refrigerator overnight, then cook it on low for hours and hours. (Hell, I’m not sure I’d be ready to dedicate 24 hours to PIerce Brosnan, let alone special rubs.)

All that makes really great pulled pork, with nice crunchy pieces, but I almost never have that kind of time. So, I took my old standby recipe and tweaked it, and the pulled pork was done in about three and a half hours on the stovetop. Compared to these other recipes, that’s quick. And when you’re cooking pork, or having an affair, time is of the essence. Because I love you, I’m including links to the other recipes.

My old standby recipe, which was a yawner, involved liberally sprinkling a pork shoulder or butt with Emeril’s Essence and tenderizer. Then I’d brown it, add a can of chicken stock, and slowly cook it over low heat, in a heavy pan on the stovetop, smothering it with barbecue sauce when it was done. It was fine, but where’s the passion in fine?

So, as Emeril himself would say, I kicked it up a notch and this recipe is way better. (There was another one that involved ginger ale I liked. I’ll have to try it in four months when I have my next fling, I mean, make my next batch.)

This is how it looks when it’s done cooking. Just pull it apart, get rid of the fat and bone, and serve it on King’s Hawaiian rolls.

This one involves pork, meat tenderizer, dry mustard, brown sugar, an onion, Emeril’s Essence, Worcestershire Sauce and chicken stock. I consolidated a recipe from Williams Sonoma along with one from someone in North Carolina and came up with this. It has the perfect amount of sweet and spice, just like a good fling.

My daughter thought it was absolutely fabulous, and she’s a tough audience. It’s easy, absolutely delicious, and only involves occasionally turning the pork in the pot, so definitely try it!

P.S. I do not condone infidelity, unless it involves pork products. Then, it’s OK, as long as you go back to your chicken.

Pork on a fork, pure poetry.

1 Tbsp. Emeril’s Essence (you can make your own, just click the link to the recipe)

In a large, heavy pot, heat the canola oil and cook the onion until lightly browned. Remove onion from the pot and set it aside.

Unwrap the pork and rinse it, rubbing along the bone to make sure any stray bone particles are all gone. Pat the pork with a paper towel. Then lightly sprinkle the pork all over with meat tenderizer and pierce it with a fork. Next take the Emeril’s Essence and rub it all over the pork. Do the same with the dry mustard. Next, roll the pork in the brown sugar.

Add an additional ½ Tbsp. of oil to the pan and place the pork in, browning it on all sides. Put the lightly browned onion back in the pot and add the Worcestershire Sauce. Then pour in one can of chicken broth. Turn the heat to low and cover the pan. Turn the pork every 20 minutes or so until tender enough to fall from the bone and pull apart. To shorten the cooking time, cut the pork into smaller pieces.

Serve the pork on Hawaiian sweet rolls with barbecue sauce. I use Bullseye Barbecue Sauce.

I Finally Swam Across the Pool!