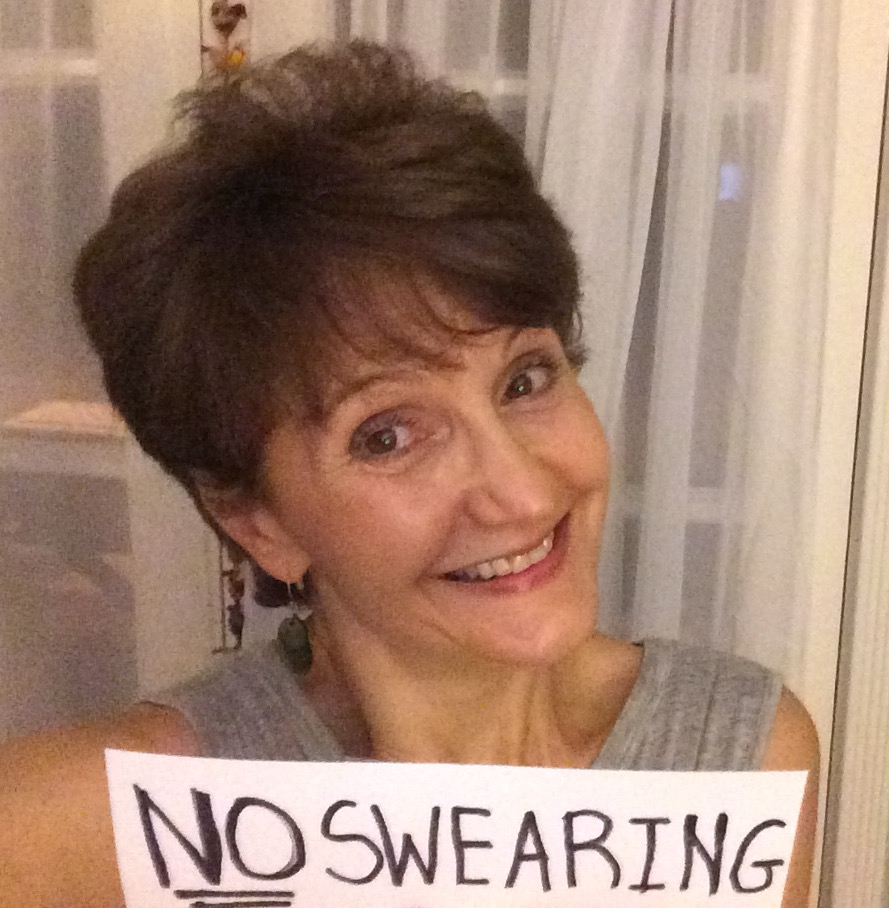 In a moment of love and serious overconfidence, I offered to make curtains for my friend, Kimberly. I measured one of what looked like three identical windows in her breakfast nook, only to discover that the impostor middle window was five inches longer than the other two. So entered the first string of expletives.

Then, in a misguided second moment of love and overconfidence, I offered to fix the floodwater curtains. That was two months ago. Poor Kimberly is probably suffering heat stroke every afternoon – so I was rushing to get the damned things done. Enter the second string of expletives.

Me, resigned to my week of no expletives.

The thread broke at least three times and each time the f*cks flew. Swearing is a bad habit I honed in college and never dropped. I always say I’ll stop, but somehow never do it.

Were there any impressionable children around? No, but my dog, has heard profanity so many times, he now understands swear words. Anytime I’m in the kitchen working and he hears the f-word or sh*t, he knows to come running because I’ve probably dropped something edible.

How pathetic am I that my pet is almost bilingual? He speaks Dog and understands English curse words.

But today, even I was surprised to hear how easily the f-bombs flew from my own lips. And it’s not just me swearing, everyone does it. It’s nothing for me and my friends to let a f#*!k or two fly during a conversation.

Here’s more proof:, Last week a friend sent me a widely circulated story called “The Subtle Art of Not Giving a F__k.” 181,066 people liked it on Facebook, including me. He uses the f-word 127 times. I thought it was funny, but now I’m wondering if I’m f-word desensitized. Now that the f-word has become daily vernacular, we’ll have to invent some uber curse word for relief like KOOFFENFACHT!

Unfortunately, I’m also a hypocrite because when I hear rap music or hard rock with the f-word, it bothers me. It always sounds so base, coarse and angry.

So, maybe I sound base, coarse and angry too.

My lame excuse is that I learned it from my mom. She swore, but she did it in Italian so, at least, it was melodic. She swore when things broke, when someone made her angry and when I didn’t come after she’d called me 27 times. As you may recall from my “Curse Words Never Sound as Bad in Italian” post, she’d scream “Zoccola, puttana, viene qua!” That means, “Rat, whore, come here!” See how much worse it sounds in English? Swearing in Italian is adorable — English — not so much.

But I digress, and I’m sure my swearing has caused my children to swear too. (I didn’t when they were little, but once they hit about 12, I loosened up.) I know they do, I’ve heard them. They don’t say really awful words around me, but they do swear. Does that mean I’m a bad mother and role model?

But it’s a conundrum because I don’t think it sounds bad when I’m with my friends and we swear. Yet, yesterday when someone was standing behind me at a coffee shop with the f-bombs flying. I have to say, it bothered me.

So, is cursing only bad coming out of the mouths of strangers?

We went from being a society that never swore in the ’40s and ’50s, at least not in public, to a society that doesn’t flinch at a string of seriously bad words. We went from thinking our parents were uptight for never cursing, to becoming hurlers of f-bombs.

We’re not repressed anymore, but was a little repression such a bad thing? I know it’s easier to swear than not to swear, but shouldn’t we work on that? It’s easier to yell at people than hold your temper, but we try not to yell, right? So why is it so OK to swear now?

Yes,  it’s sort of edgy and “badass” to swear, but if we really stop and listen to ourselves, how do we sound? Is this better, or are we just a bunch of crass, foul-mouthed derelicts?

I used to tell my kids that people who swore just weren’t smart enough to think of a better word to use. That may be true, but swearing does let off steam.  According to Reuters,  respectable researchers at Britain’s Keele University have concluded that cussing can make you feel better and lessen pain.

Time Magazine did a story on a book out over a year ago, called “Holy Sh*t! A Brief History of Swearing” by Melissa Mohr.  Mohr said most kids learn to swear before they learn the alphabet, with many knowing at least one swear word by the time they are two.

That doesn’t bode terribly well for us, but does explain my Corgi’s facility with swear words.

Here’s the conclusion of friends and family. Cussing is OK, but only among close friends you know really well.  There has to be that comfort factor, or degree of familiarity among your target audience or it’s inappropriate and shocking. I still feel weird using the f-word around most of my family members.

If you’ve ever taken a chance and sworn, then realized you’ve offended someone, it can be really uncomfortable. It’s almost as bad as being around someone who refuses to stop cursing and accuses you of being uptight because it bothers you.

That just happened this week at a meeting. Someone got up to angrily make a point and used the f-word numerous times. Then someone else asked him to please refrain from using it and he got even angrier and refused. He ended up sounding like a big jerk, and his message was lost in the profanity.

But I think he’s wrong, I don’t think it’s being uptight, I think it shows good manners to be respectful of people’s boundaries. Some things are natural, like close friends letting loose around each other with a few swear words.

It’s natural, and even fun to swear sometimes with our friends, but I think it’s important, polite, and civilized to show some respect around people you don’t know well – like the person in line in front of you at the coffee place. It’s what makes the world a more comfortable place to live and raise our kids.

So, I’m going to try an experiment, which will probably fail miserably because I have the self-control of a honey badger. (They’re one of the worlds 16 most aggressive animals. Who knew?)

I’m going to do my best to try to stop swearing for one week and see if I shrivel and die.  You should try it too and see what happens. I’ll report back on my progress, and hope you will too.

This will either kill me or make me sound slightly classier. At least I’ll be more conscious of my words. If it’s not a big difference, I’ll probably slide back to my wicked honey badger ways when it’s time to blow off some steam — especially if I’m sewing — but never in line at the coffee shop.

Dance, Even When Everyone is Watching