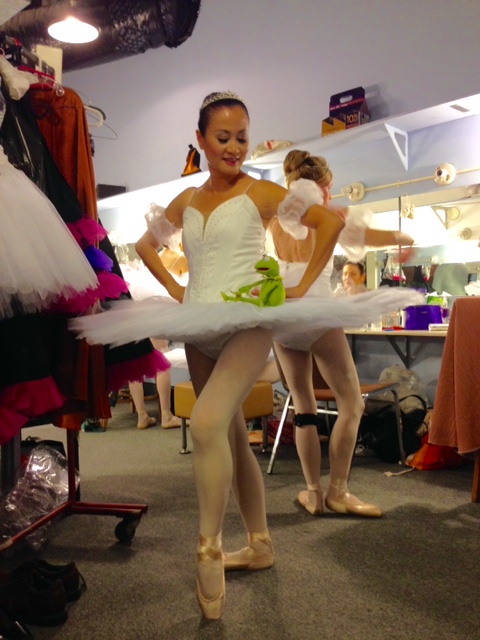 Esther and I met in a beginners swim class. She was quiet, laughed at all my silly comments, and was determined to learn to swim, so of course, I liked her. She wore  a cute bathing suit with a sheer, pink, flouncy skirt that looked like a ballet outfit and had the nice legs I wish I’d been born with.

We chatted between death-defying episodes of attempted swimming, and, after classes were over, we decided to keep coming twice a week to practice. We got to chatting and I found out Esther’s been taking ballet classes for ten years. The company that put the show on was Media City Dance and Pacific Ballet Dance Theatre.  (That explains the nice legs.) Considering I couldn’t even master step-shuffle-hop in my sixth grade Christmas debut as a snow flake dancer, I was very impressed.

Esther wanted to study ballet when she was young, but her practical parents encouraged her to learn something that would offer a better chance of a steady paycheck.

A bevy of ballerinas.

She has a good job working in computers now, but about ten years ago, decided to take ballet classes, like she always wanted to. Esther looks like she’s maybe 35, but isn’t – testament to what a good ballet routine and a paycheck will do for a person.

The first thought that ran through my mind when she told me her ballet story was: How cruel, not letting your child pursue what she loves. But Esther isn’t bitter at all – probably because she has financial security – thanks to her parents.

I went to see her perform tonight, and take photos of her dancing, which is why my blog was a day late.

Esther dances with women of all ages. Women older than me, were dancing in tutus and ballet slippers. (I heard someone say one woman was 80.) And they all had great legs!

Their director and choreographer, Natasha MIddleton, talked about the joy of pursuing a dream no matter what your age and said these women were proof it was possible. I couldn’t have been more impressed.

Esther, looking elegant. After last night, I think I’m buying a cape. It will make me look very mysterious and cool — or like a vampire — not sure.

I watched their faces as they danced. There’s a look each got when she was in the spotlight. It was a look of confident beauty, the kind movie actresses have when they know the camera is on them, the lighting is just right and they look gorgeous.  They were each absolutely beautiful tonight.

I’m so glad I went. I’m in awe of Esther for never abandoning what she loved and never becoming bitter. I also commend her parents for doing their best to guide her because parenting can be a seriously thankless job.

It was great cheering her on tonight, I hope she dances as long as those legs let her.

*(That’s what they say to ballet dancers before a dance. It means poop in French. I looked up why they say it because it seems a touch rude, even to me. Here’s what I learned: In the early days of ballet, companies used animals on stage. Every time an animal pooped on stage, someone from the audience would yell,”Merde!” to warn the dancers. It was used so often, that the term stuck to wish you good luck.) My mom always said poop was good luck, maybe that’s where she got it.

A Day in the Life of a Soldier