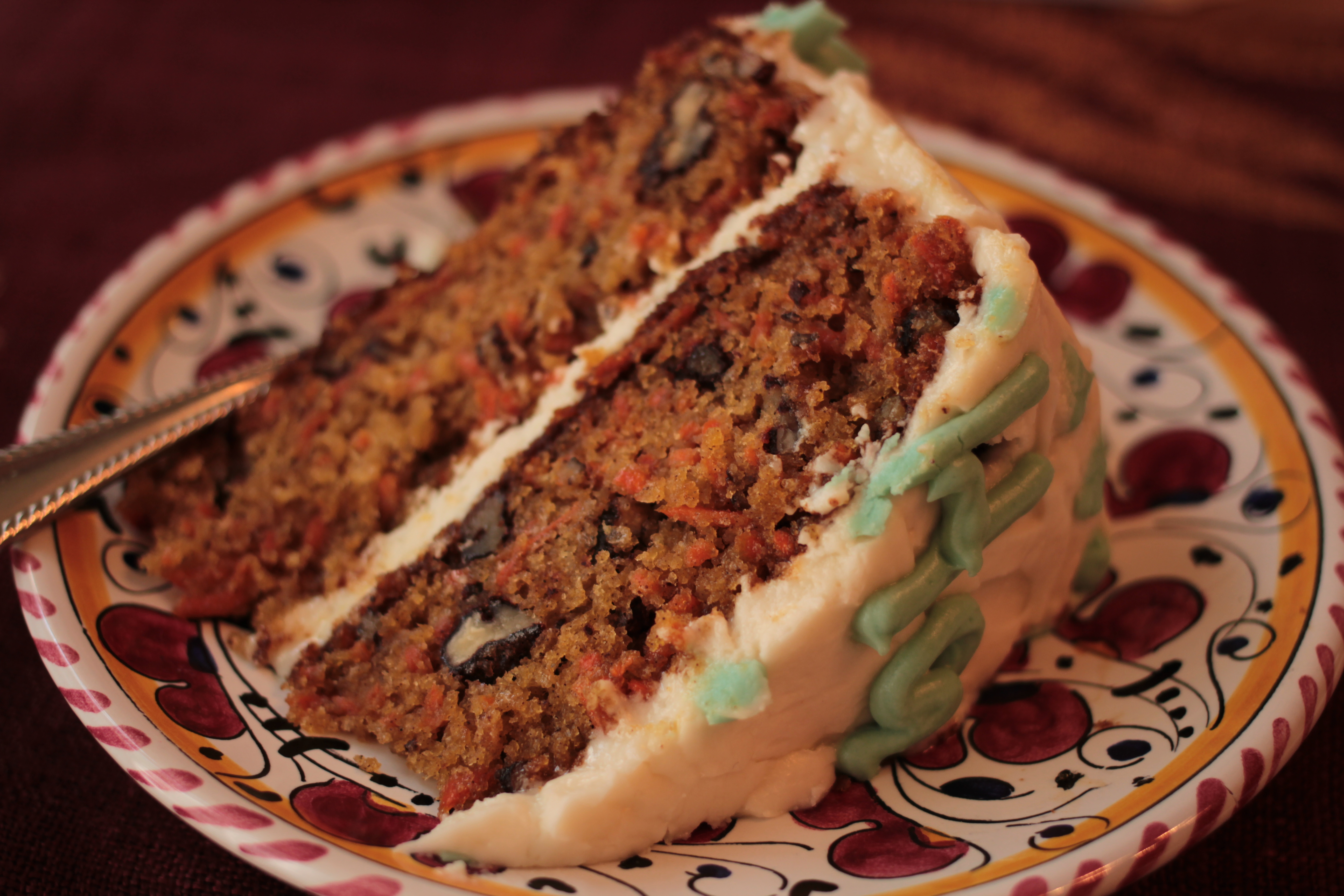 Debra Deyan with her late husband, Bob after winning the Lifetime Achievement Award from the Audio Publishers Association.

Today, my friend Nicol Zanzarella (audiobook reader and actress extraordinaire) and I decided we needed to take our friend Debra Deyan, owner of Deyan Audio, out for a belated birthday lunch. Deyan Audio records audiobooks and has won so many Audie Awards (the audiobook equivalent of the Oscars) it’s almost unfair.  Deb and Nicol are amazing, and two of the most driven, dedicated people I know, so getting together with them is always a treat for me.

I decided to surprise Deb with “Fran’s Clearly Superior Carrot Cake” for Deb’s birthday because it’s her favorite.  I called this blog, “Finally, A Carrot Cake Victory,” because last time I wrote about my carrot cake, it was a cake-off with my friend, Joan, and I came in second.  Well, I was vindicated by the popular vote this time around and couldn’t have been happier. Honestly, my self-esteem clearly needs so much propping up sometimes!

We went to a  restaurant in Burbank called Market City Cafe. As soon as we walked in, the waitress was so sweet, she asked if she could put the cake in the refrigerator for us!  How many places do that? Usually they give you the stink eye for not buying their dessert!

Then we sat on the patio and talked for a few hours, which was wonderful.  As we were wrapping it up, our fabulous waitress (I think her name was Alexa, but I could be totally wrong)  got the cake out and put the candles on it for me. (All I had was the 22 left from my daughter’s birthday, so I brought them because who doesn’t want to be 22 again?)

Alexa brought it out lit and ready to go.  (I’m so mad I didn’t get a photo of any of this!) So, since our waitress was so nice I told her she could have a slice.  She was eating it in the back where another server saw. She asked if he wanted a bite, and he dismissed it, saying his grandmother’s was the best.

He begrudgingly took a bite, and became a convert. He liked it so much, he came to our table and said, “Who made the cake?” I said I did and he said it was better than his grandmother’s, but he would never tell her that. Honest to God, for a baker that is the highest compliment you can get! I was beaming.

Then, because we were sitting outside, a woman walking past, who apparently had just eaten there, asked if it was the restaurant’s cake. We said no, then she asked if she could have a piece. (Gutsy, but kind of funny!) Then Alexa asked if I would share the recipe and if she could have a piece to take back to her boyfriend. It was kind of like a feeding frenzy, minus the sharks. I wondered who else might come along and want some.

I took the opportunity to hand out a few of my blog business cards, where my carrot cake recipe lives, and enjoyed basking in the warmth of cake adulation. When you get fantastic feedback on something you’ve made — it feels like applause and totally makes your day. Sitting with an accomplished actress and a business tycoon could make a person feel a little insecure, but the accolades propped me right up. I completely understand why my mother loved food praise. It was her moment on stage, every day.

Maybe that’s why I cook so much, I’m just starved for attention. Well, today I got it and it was great! Now you know how shallow I am. The link to Fran’s Clearly Superior Carrot Cake is above. Try it, it is the best you’ll ever eat.

Buck the Bleep Up

At What Age Does Crankiness Set In?