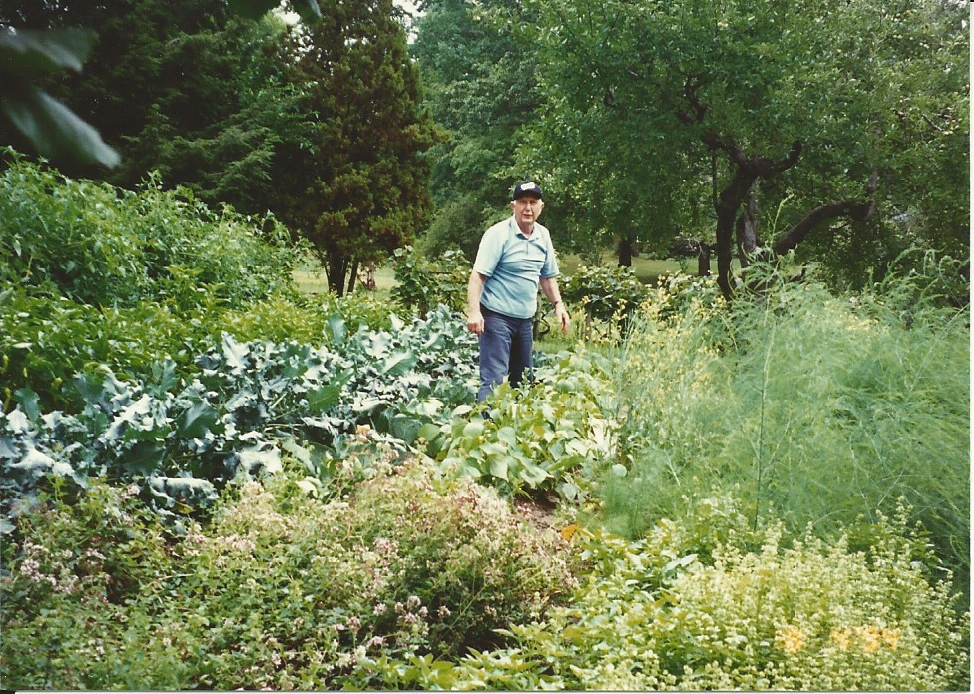 My dad’s death two years ago today left me with a visual I’ll never forget and a nagging question:

Where will I be carried out?

We’ll all be carried away from someplace, so where and how do I want to be living when they cart this worn-out carcass away? It’s something I’ve been thinking a lot about lately, because this apartment is not that place and I can’t help but compare myself to my father.

Even as a baby, I was so smitten, I couldn’t be bothered to look at the camera.

He was separated from his family in Italy when he was 14. He was brought to the U.S. by his dad who dreamed of bringing the rest of the family, a few at a time. That year the stock market crash stopped both; the economy, and my grandfather’s dream.

My dad worked hard, taught himself English, joined the CCC so he could work, became a citizen, served his adopted country, learned to be one of the best brick masons in the area and sent us to school so we could do better than he did.

Dad working on our house.

He worked two years building our house. Working at his day job laying brick and working late afternoons and evenings on a beautiful plot of land laying the brick, block and stone that became home. It was our center of activity for every Christmas Eve and holiday, for 57 years, and a haven for me when I returned after divorce.

Living with my dad during his final two years showed me the beauty of my parent’s simple life. I imagined being my mother as I stood in the kitchen cooking and cleaning. I felt the pleasure, blisters, and exhaustion of tilling the garden for hours, and savoring the fresh fruit and vegetables he was so proud of.

I saw Dad create friendships with people based on trust. He’d build a wall for free for the plumber or the carpenter and say, “Well, when I need something, they can help me.” I saw that generosity come back to him again and again, proving his favorite saying; “Friends are better than money.”

He showed me what it took to die well too.

I saw him, even in the throes of dementia, and aggressive prostate cancer, trying to stay as healthy as he could. He got up every day and, though he probably didn’t feel like it, went downstairs to exercise. He did his best to try to beat the painful cancer weakening him because his goal was to see cent’anni — the toast we always made. I think it’s the only goal he ever set that he didn’t achieve.

I saw him learn to accept helpers coming into his home. He was against it at first, but then, not only accepted them, he befriended these women with coffee and conversation, even offering them homemade wine.  They, in turn, couldn’t help but admire him for his hospitality, sense of humor and stubbornness. Living with him through this, I learned patience, compassion, and tremendous respect for the selfless work of caregivers.

When my dad fell ill and didn’t regain consciousness, he was in bed, at home, surrounded by his brother, his four kids and their families. We took shifts during his final days so he was never alone. We wanted to be there for him, as he always was for us. And when he took his last deep breath, we all held on until he was gone.

Later, when the men from the funeral home came to take him away, he even brought dignity to his departure. They carefully placed him in a vinyl, burgundy body bag, which doesn’t sound terribly dignified.

Dad in the front yard saluting.

Yet, as they carried him out the front door of the home he carefully built, lived in, loved in, and died in, his children watched as the flag in the front yard waved, saluting a beloved veteran and inspirational soul. It was the last chapter of a life very well lived and, as beautiful a death as possible.

I asked him once if he had any regrets. I said, “If you could do it again, would you do it differently?” He said he was pleased with what he’d accomplished and that he was satisfied with how his life turned out. That must be an amazing feeling and I know it only comes from doing your very best every day.

To honor him today, I got up extra early (when I didn’t feel like it) and exercised, (I even practiced swimming), then began working on several projects, moving forward doing the best I can.  It’s what he would want me to do today and every day.

Where will I be carried out? I don’t know yet, but I hope it’s a place I love, work hard for, live generously in, and is filled with those I love when I go.

My Brother Had a Heart Attack and I Wasn’t There