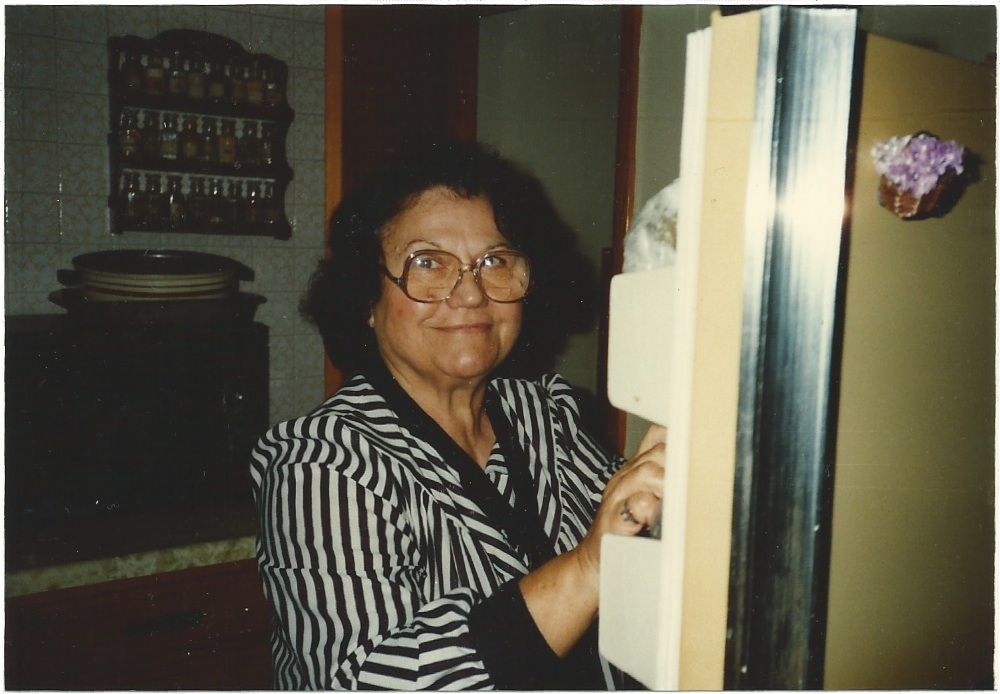 Today is the 23rd anniversary of my mom’s passing. She was a force of nature; making you crazy one minute, making you laugh the next. This story is proof.

“Franzes!” I heard my mother’s irritated scream echoing along the metal hallways of the Queen Mary. My father and I exchanged knowing glances and knew our tour of the engine room was over. My dad loved seeing the ship’s quarters as they were during World War II, when the Queen Mary was pressed into service. But, clearly, something was wrong.

I heard her again, an unmistakable edge in her voice. She was thoroughly ticked off. As we rushed to her, I wondered what people were thinking. Did they think she was hurt, crazy or just rude? Did they think we were awful for leaving her alone?

For once, I was thankful I knew no one in Southern California. When we reached her she had a scowl on her flushed face. She loudly blurted out, “Where da damned hell a you been? My guts is a commin out! I beenna a waitin over an hour for youns an I’mma tired. Whatta took a you so damma a long a? Lettsa go!”

Thank God, I was so intent on the speech I was about to make, I wasn’t paying attention to the bystanders probably waiting for this fireplug of an Italian woman to drop her innards on the deck. “My guts izza commin out,” is not vernacular in these parts.

(Don’t worry, her guts did not make an appearance.)

I started reprimanding her quietly as we headed for the car in the parking lot and didn’t let up for ten minutes. She meekly got into the back seat and my dad and I got into the front.

I raised my voice as I steered us out of the parking lot. “I can’t believe you Ma, why were you yelling? You knew we were on a tour. We told you we’d be back. We weren’t gone more than twenty minutes.  Why did you start yelling in front of all those people? Do you know how embarrassing that was? Plus, it’s rude.

At first she was defiant, barking back her story of how she was tired and felt like her insides were coming out. (It does happen to women.  It’s called prolapsed uterus, which I didn’t understand at the time, so I now have to live with the guilt that her guts probably really were coming out!)

She said she didn’t know when we’d be back or where we’d gone, which was not true. But, if stretching the truth gave her an edge, she always went for it.

Then, she started to feel bad. She knew I could excuse pretty much anything, except making a scene. She knew I was angry, guts or no guts. She knew this because I maturely told her I had nothing to say to her.

I drove about forty minutes without saying a word to her, and for an Italian woman, a world without talking is worse than death. She tried engaging me, but I ignored her completely. (I know, I know, I feel hideous now.) Finally, as we got close to home, I felt her heavy hand tap my shoulder.

She was half crying as she handed me a small, rolled up piece of paper, and in a cracking voice she said, “Pleece Frenzes, take a dis.” I took it, parked the car, and as I headed toward my apartment I unrolled the paper. Inside was a twenty dollar bill. The note said:

I walked up the sidewalk toward my apartment, trying to look stern as I read, but I could feel myself starting to laugh. I think I believe she even signed, “Your Mother,” on the twenty. I wish I would have kept it.

One minute I was ready to strangle her, the next I was laughing at her creative spelling, her attempted bribery, and the fact that she signed the twenty, “Your Mother,”  like I wouldn’t know who it was from.

I turned toward her and said, “Ma, I don’t want the twenty dollars, I just want you to think about what you do.” With big tears in her eyes and her mouth a sad crescent, she shook her head violently, pushed the money back in my hand and said, “No, you keep id a. Imma sorry Frenzy, I just a wanna you to love a me.”

Her voice was shaking and she continued, “Wen a you dond a talk a to me, I can’d a take itta, pleece a don’d aver do datta to me. You really hurt a me.”

I felt hideous for reprimanding my mother so badly, she felt payola was necessary. I reached out to her to give her a hug and said, “It’s okay Ma, I’m not mad at you.”

I can still feel the warmth of her sturdy round arms and shoulders as I bent slightly to hug her under the yellow overhead light of my porch. I can still smell the clean soapy Dial fragrance of her skin.

We stood there in the entryway hugging for what seemed like a long time. She never liked to let go first, but when she did she looked up at me with such repentant eyes that I almost believed she would never cause a scene again.

You know, if I could have her back, I’d take a scene, anytime.

Low cal and yummy; wine and peaches sitting on top of the table runner my sweet Aunt Maria crocheted.

I’ve been bad and haven’t been cooking a lot, but I’ve been drinking more (not a good sign). This week, I highly recommend you buy some canned peaches and cut them up in your next glass of wine. My dad used to do this. I’ve been doing it and it’s a wonderful way to pretend it’s summer, end a meal and avoid a fattening dessert.