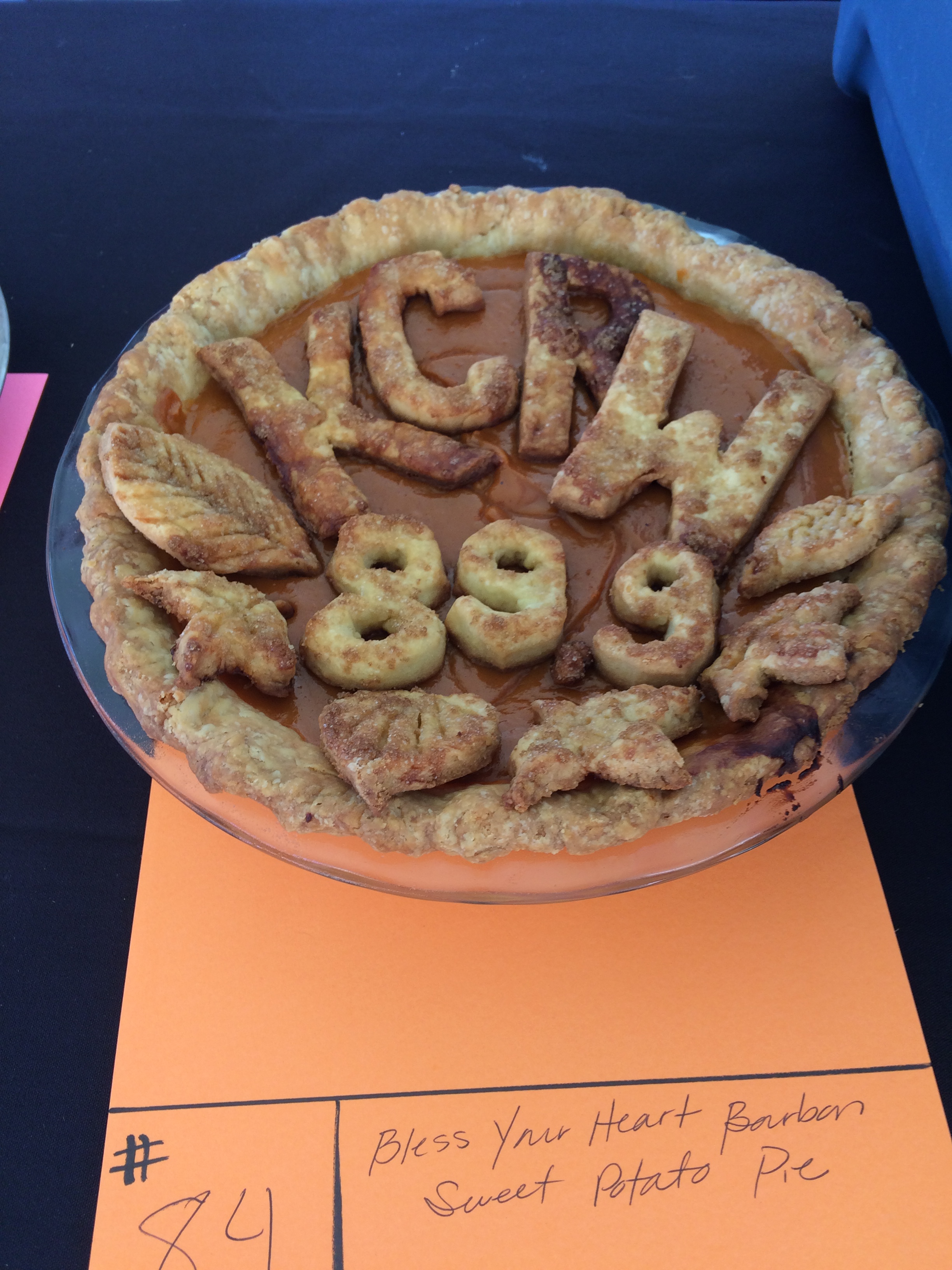 Well, guess who continues to build character at an astounding rate?  Yes, it’s me.

Although I went in pies a blazing, I left the KCRW Pie Contest without a ribbon, or even an honorable mention, but did manage to have a good time.  Luckily, I was with Allegra, who is always fun and very supportive.

Allegra – living up to her name.

Now that I know the crowd (Public Radio people here in L.A. are a little more progressive than most people) I know that next time, a mere cranberry apple pie doesn’t stand a chance.  I’ll have to come up with something more quirky and experimental with a much more clever title.  I’ll also keep working on my crust, because I saw a lot of great looking crusts out there and I still think my flake factor can be improved.

Becky Cummings, the creator of the awesome coconut cream with chocolate ganache pie.

We contenders were all stationed beside each other at long tables.  I was beside some really nice women, who’d entered last year and were very supportive.  One woman had a cheesecake made with goat cheese, which I think had lavender in the crust and was topped with a blueberry topping. It was amazing!

The woman to the right of me, Becky Cummings, had a killer coconut cream pie with chocolate ganache on the bottom crust that was really delicious. She was so sweet, she even let me taste her pie before the tasting officially started. And on the left of me was Jeanne Ackerman, who had a spinach pie.  She let me taste hers too and it was delicious. Her crust looked wonderfully flaky and gave me crust envy. I wish I’d thought to get her photo.

People zipping right past my pie.

At first I was confident in the allure of my pie, but as people piled in, I started getting nervous. Those admitted in to taste the pies, only got two tickets, which means they could only taste two of the 382 pies entered.  So, everyone was being pretty picky about the pie they wanted and apparently very few wanted apple cranberry. My heart broke a little every time people went at breakneck speed to get to the blueberry lavender lady near me, or the guy with white hair across from me, who must have had meth in his pie, because everyone seemed to want whatever pies he and his neighbor had entered. I think they both won a prize.

Two men with the most popular pies in town – probably laced with meth.

The only person whose pie was almost as unpopular as mine was a little girl who’d made a pumpkin pie with chocolate crust.  She was one pie to the left of me, but she was cute, so even she got more takers than I did, at first. She’ll probably come back and win next year with a  tamarind, chipotle, lemongrass, cardamom pie with chili infusion or something.

My pathetic unpopular pie in the middle

My neighbors kept telling me not to worry,  that my pie would be eaten, but, while they’d already given away three or four tastes of their pie, I was only down one slice  and it was a barter slice, just to get a taste of the nectarine pie I wanted to sample.

My heart was sinking until a sweet young girl walked up, handed me a ticket and told me she wanted a piece. I was so thrilled, I took her photo for my blog. Then a wonderful young man named, Achilles came up and wanted to try my pie. He liked it so much he came back and  brought his girlfriend, Sarah with him. She had entered also and I’m not sure if she went home with a prize or not, but they were adorable and made my day!

Eventually, I was able to give away all my pie slices and leave with my head held high, but it was a little sketchy for a while.

But here’s what I learned about baking pies after this little adventure. I gleaned this from a Bon Appetit website article and the school of hard knocks.

If they don’t, then come back next year with a vegan, cardamom, tahini, coconut pie with balsamic glaze. Who knows?  Maybe you’ll win!

This is how I felt!

Blatant attempt to ingratiate pie – wish I would have thought of it!

The Demon in the Room