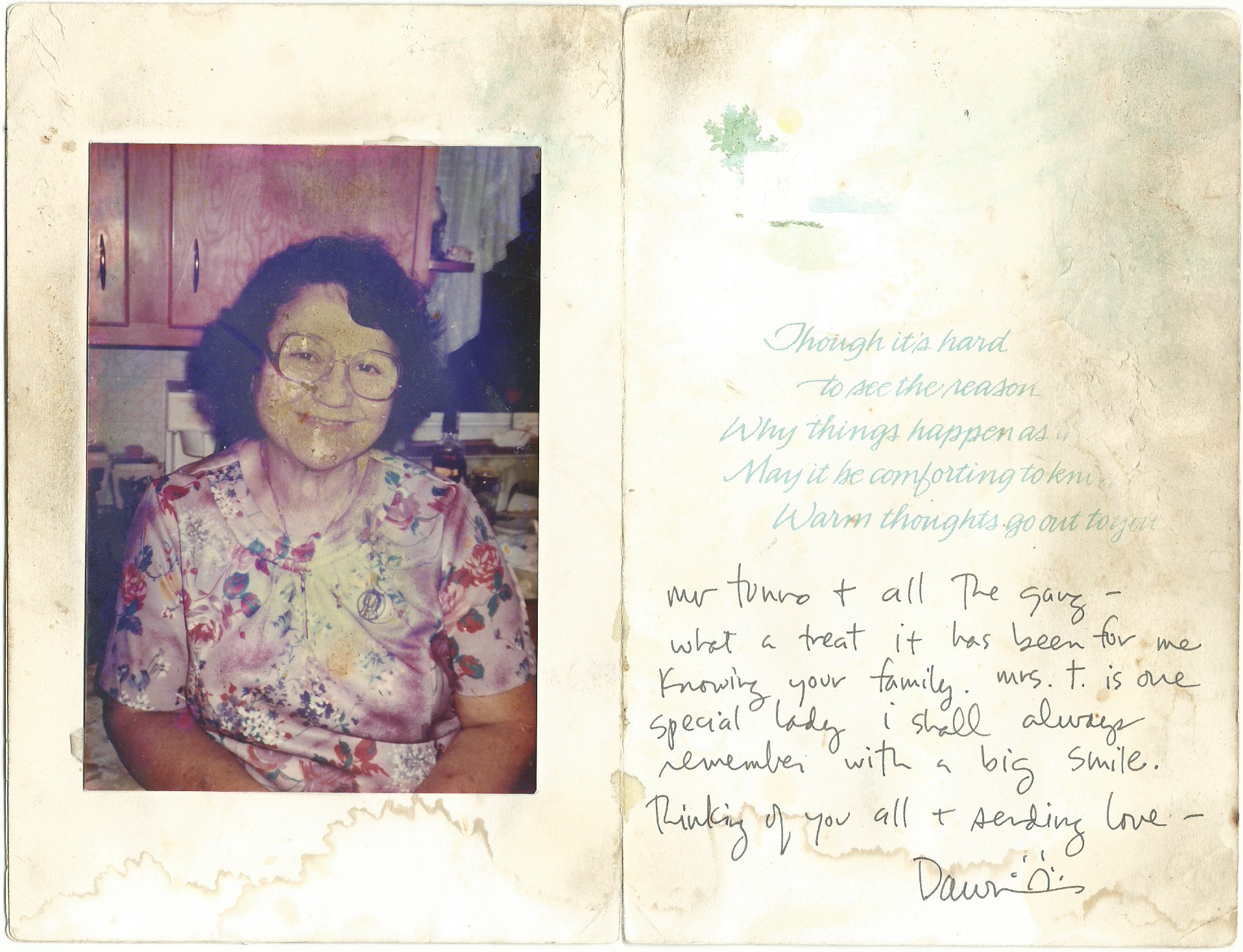 I’m writing about love today, which is rather ironic given that I’m a divorcee. But it’s the month of October. My parents married on October 7th, I was married in October and I’m going to a cousin’s wedding later this month, so it has me thinking about what love is, and what it isn’t.

My father was not a man who showed great emotion – as you recall, he never even told me he loved me until I was 21. But I had no doubt he did. He was the same with my mom. He’d pat her on the shoulder and call her Grandma, but there were no great physical displays of tenderness.

When you’d talk about marriage to him, he always made the same remark about his marriage to my mom. With a wry smile, he’d quietly say “Well, everybody’s entitled to one mistake.” Sarcasm was his forte.

And if you asked my mom, she’d say, “Eeef I had to say datta a your fodder made a my heart go pitter pat – I’d a be lyin. But he’s a gooda man, he always treats a me witta love, honor anna respect.” She admired how hard he worked and marveled at his stamina, even while she grumbled that he expected her to work as hard as he did.

They disagreed on lots of things and many of their conversations included a few fireworks because my dad knew how to bait my mom, and she always took the bait.

Love may accept lots of things, but fights for what’s important. Dad got impatient with Mom over her weight because he wanted her to stick around, be healthy and grow old with him, but she wouldn’t listen.

Yet, when she put her foot down, forcing him to see a doctor about a mole on his chest, he listened. The mole turned out to be melanoma, they successfully removed it, and he lived for another 36 years.

My parents agreed on the big things: right and wrong, money, kids, the house, religion, how to treat people, cleanliness and what constitutes good food. In Italian families, food is a pretty big sticking point

Mom relied on Dad to provide for her, take her places, and be a good father to her kids. In return she had a hot meal ready for him every night and raised his kids to be “mostly” normal. She would occasionally give him a hug or a kiss on the cheek, and wrote sweet cards to him in her broken English, but wild passion was not what we saw.

Yet, when my mom passed away at 78, I think even my dad was surprised by how much he missed her. Just after her death,  one of my college roommates and best friends, Dawn, send a lovely card that held a photo of my mom.  That card sat on the small buffet next to the kitchen table for 21 years. The corner of the card, picked up time and again, was worn and dirty with my dad’s finger marks. Spots on my mom’s face were almost rubbed off from all the times my dad picked it up and talked to my mother. “You left too soon!” he’d admonish her as he touched her face on the card. I can only imagine the conversations he had with her when I wasn’t around.

And that, I believe, is what love looks like.

This is the back of the card. The tape held the card open so he could see her face.

Love apparently puts up with crap. Love fights when necessary, but tries to overlook weight, bad breath, a quick temper, a weakness for lottery tickets, old age, sarcasm, and a tendency toward being a workaholic.

Love quietly mourns  a lost partner and talks to her picture time and again, sometimes for decades. Love knows every relationship has to involve give and take, and love’s OK with that.

Love is not the Hollywood version – don’t believe that for a second. Love is day to day –learning to be kind and live with each other, and then trying to learn to live without each other.

Shakespeare said it much more beautifully than I ever could — but I get it, it’s all about acceptance.

Happy Anniversary Mary and Robert 1940 to the present — because real love never dies.

Let me not to the marriage of true minds
Admit impediments. Love is not love
Which alters when it alteration finds,
Or bends with the remover to remove:
O, no! it is an ever-fixed mark,
That looks on tempests and is never shaken;
It is the star to every wandering bark,
Whose worth’s unknown, although his height be taken.
Love’s not Time’s fool, though rosy lips and cheeks
Within his bending sickle’s compass come;
Love alters not with his brief hours and weeks,
But bears it out even to the edge of doom.
If this be error and upon me proved,
I never writ, nor no man ever loved.