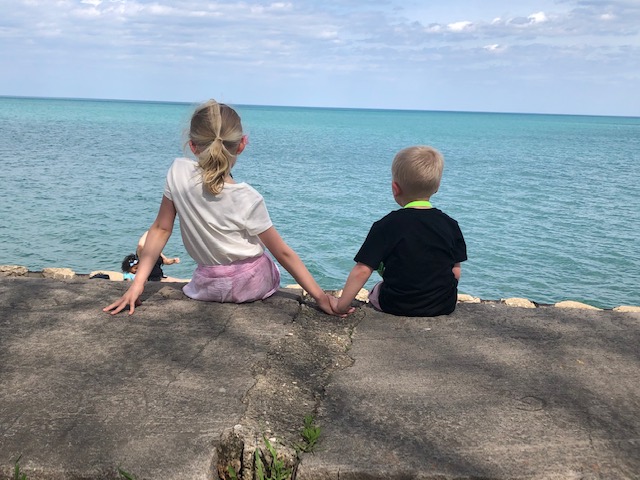 Finally, like the wandering Israelites, I’m back after nearly forty years away. I am exhausted mentally, physically, and financially after this big relocation, and could live happily never moving again. I’m almost afraid to unpack, just in case I get the urge.

At some point I’ll share my mover horror story but suffice it to say that when you choose a mover, don’t choose a company that facilitates a move for you, then hires questionable subcontractors to move you, who then charge you thousands more dollars than you were quoted.  Hire an actual moving company that is invested from beginning to end. It was a hard, expensive lesson for me.

Thank goodness the best part was the drive across the country. My sweet son, Anderson, kept me entertained with alien videos, podcasts and his Italo disco collection. Italo Disco is something I can handle for a song or two, then the boom-ch-boom-ch-boom makes me go completely mad. I had to threaten violence at least twice before he finally resigned himself to playing some of the CD’s I’d packed for the trip.

Lyle Lovett’s Pontiac brought us together, but I think my favorite moment was when we bonded over “Let’s Get Excited” by the Pointer Sisters. I was impressed and only somewhat concerned that Andy knew all the words, but we really belted it out.

We drove an average of eight hours a day. We pulled out of Glendale at 4:30 p.m. fueled by Deluxe Quarter Pounders with Cheese and special sauce (ask for the sauce – it’s totally worth it!). Thank you Annie Z. for the gift card, it was most appreciated!

As we drove we watched the almost full moon play hide and seek behind the clouds. Our first stop was just outside Phoenix, Arizona after an hour of driving through construction at five miles an hour, then pouring rain. The area was prettier than I remembered and thankfully, gave us the only rain we hit on the entire trip.

Next we headed to Albuquerque, New Mexico through gorgeous red and purple rocky vistas. We stopped at the Petrified Forest and the Painted Desert in Arizona, which were both remarkable in their own way. It left me wanting to see more of Arizona and New Mexico. Sadly, we missed Winslow Arizona, where I wanted to stand on a corner, but c’est la vie.

The next night was in Oklahoma City. My apologies to you Oklahomans and Texans, but Oklahoma was a state we pretty much yawned through because the flat vista of I-40 never seemed to change. We saw a bit of Texas, which was also flat and seemed to stretch forever. Thank God, my friend Mandy bought me a ton of See’s Candy before we left. It took four pecan turtles to get me through this part of the drive.

Next, we made our way to St. Louis and stayed in an area called Wildwood. It was pretty and had a newly constructed town with cute movie theaters and restaurants, but there were so few people out, except for a plethora of very loud, obnoxious 13-year-old girls, we thought we were on a vacant movie set from hell. But my son met nice people in our hotel lobby and made friends, as he often does.

St. Louis was saved by my cousins’ newlywed cousin, Colleen and her husband, Matt, who bought us breakfast, and kept us entertained through the whole meal, fortifying us for our drive to Chicago. There are some people you meet and automatically love — Colleen is one of them. I look forward to seeing her again and getting to know Matt better!

Then we headed to Illinois and stopped in Springfield to see the home where President Lincoln spent most of his adult years. It was a nicely restored part of town and worth a stop.

We landed in Chicago on Derby Day and got to spend two whole days with Brandon, Ingrid, and Ingrid’s folks – who got me so excited about the Kentucky Derby! Ingrid’s dad placed bets for everyone, so there was a reason to cheer. One of the kids’ cousins, who was not with us ended up winning. Of course the highlight of the trip was those two utterly adorable kids who call me Franma.

Their new home is unbelievably hip, with cool lighting everywhere! We were blown away by how beautifully it’s coming together. They are a dynamic duo of home refurbishing.

We got in Uncle Andy and Franma bedtime stories with the kids, and whatever weird character voices we could conjure up. We watched movies, played serious hide and seek at the playground, let the kids practice bike riding, and had great one on one time.

We even got to see Brandon play in a hockey game! Plus, since neither of us had really ever seen Chicago, we found ourselves so impressed.  We went to the lake and it was magnificent.  We never expected Chicago to be so gorgeous and so clean. There was so little litter, I was thrilled. Brandon attributes it to a good Midwest upbringing.  This visit was more reinforcement that we made the right choice driving instead of flying. I can’t wait to go back and maybe catch a game at Wrigley Field.

And speaking of not flying, may I say that my 2006 Honda Pilot was a true road warrior. God, I love that car! Not one problem, even with 186,000 miles on her. Investing my stimulus check in my car’s upkeep was definitely a good idea. We felt truly blessed!

And Topper, who just turned 15-years-old, made it across the country like a champion, sleeping on the back seat floor. That’s pretty impressive for a dog of 105.

Next stop was Canfield Ohio to stay with my sister-in-law, Donna for a night. Bernie was off golfing, but his wife took great care of us. Donna made us a mommy meal of slow cooked chuck roast, mashed potatoes and veggies with a German Chocolate type cake for dessert.  It was all delish. We stayed up late talking and finally crashed.

Next, we HAD to stop and visit Uncle Richard, who at 91, is even more amazing. He is slightly bothered that he doesn’t have the supersonic energy he used to have, but I haven’t noticed much difference in his speed.

Finally, our last stop was Pittsburgh where we stayed with my sister-in-law Patty. My brother Bob, was also off golfing in a tournament, but it was a wonderful visit. We had no idea we were hungry until we skeletonized the prosciutto and mortadella appetizer plate Patty put in front of us. Then we got take out, which was delicious. We rehashed our trip, talked a bit, then crashed hard. I kept nodding off on the poor girl.

Andy flew out the next morning, and is looking forward to coming back to visit both Pittsburgh and Chicago. Patty and I got in a beautiful walk on the trail by their home and it was as good as May can get. That night I think I slept more soundly than I’ve slept in ages because the trip was behind me and I could finally relax. Plus here, I never have to worry about waking up to an earthquake.

I stayed with Patty another night, then headed to Harmony, the incredibly cute town I’ll be in until I figure out where I want to be permanently.

Harmony has a population of less than one thousand and is so adorable I can hardly stand it. Add in the fact that it’s May, my second favorite month back east (next to October) and you’ll understand my giddiness at being back.

I saw my sister after my first night in Harmony. We did some errands and she helped me wolf down a Wendy’s burger, then round it out with a salad. We ARE our mother’s childen!

I’m still kind of blown away that after 40 years, I can drive to see my siblings and their kids! I am quite certain they’ll all be chipping in to buy me a one-way ticket back to California soon, but for right now, it’s pretty great.

When I got to the apartment I’m staying in temporarily, Carolyn, my trusty friend of 41 years, her mom, sister, and brother made sure it felt like home since my stuff hadn’t arrived yet. They had lovely plants and chairs on the front porch, a table and chairs inside, red tulips in a vase, and a bed ready to sleep in! It was everything I could possibly need for my first few nights. It was so sweet, my tear ducts went into overload.

I currently live next door to a log cabin — a bona-fide log cabin that’s probably at least 200 years old! Someone was giving directions to my apartment and said it was right next to the log cabin. Problem is, there are about six log cabins in this town, so it took me a while.

It’s lovely here with flowers in bloom and weather making up its mind between cold and warm. I’m in a temporary apartment because the place I’m moving into isn’t quite ready. It’s going to be small, but nice and half the rent I was paying! I’ve already met the neighbor and she loves to walk, so I have a walking partner! And it’s only a half hour from Pittsburgh.

After my first night here I bought a local favorite, chipped ham. It’s pressed ham, sliced really finely that I’ve been addicted to since childhood. Staying healthy here will be a serious challenge.

There’s a bakery, a weaver (in a log cabin – of course) an antique shop with at least seven things I simply must buy, a hippie store where almost everything is tie-dyed, lush green parks with bunnies hopping around, and a place that sells pierogie Christmas ornaments! (I know, I know, it’s always about the food!)

But humor me: Pierogies are eastern European filled dumplings that look like ravioli and are a delicious belly bomb. They’re filled with mashed potatoes, potato and cheese, sauerkraut, or prunes. They’re cooked in butter and onions, and are very western Pennsylvanian. At Pirate games, there are people who dress in Pierogie outfits and race across the field. Some things, you just have to see to believe. Here’s a link to the Pirate Pierogie page.

There’s even a church bell that chimes on the hour, a railroad nearby that allows me to hear that lovely, slightly mournful sound of a train passing through in the night. Plus, Harmony has a great restaurant called the Harmony Inn. Good beer, soft, warm pretzels, German food and, thank God, salads!

I’m sleeping better here than I slept in California. I chalk it up to finally being where I’m supposed to be.

A Favor Before I Move