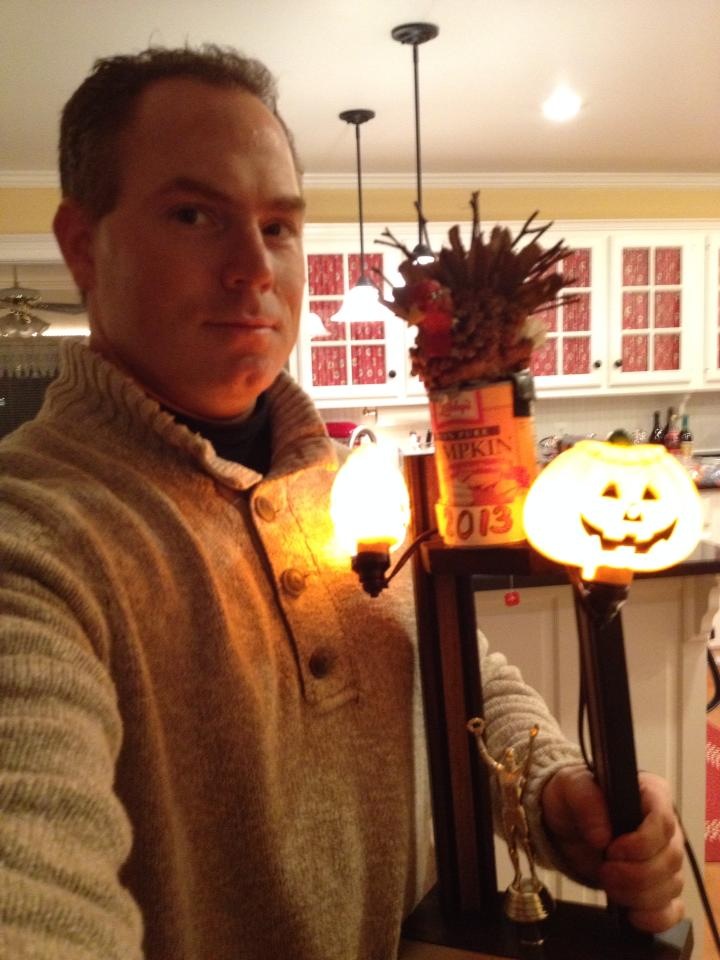 Remember the nice story I wrote last week about my family loving each other because my mom was a great cook and so nurturing and wonderful? Most of the time that’s true, until it’s time for the Annual Cutthroat Tunno Pumpkin Pie Contest. It commences right after Thanksgiving dinner, which is a good thing because we’re all too full to move, let alone hurt each other.

This was 2011. Elissa, first place, Matt 2nd, me, third and Marc, fourth. Chris says his pie was out of place, hence questionable voting.

I’ve only been around for a few of the competitions because I live in California. The few I’ve participated in, I’ve never won, which is really irritating because I love to bake and my pie is damned good.

No, the trophy for the last four out of five years has gone to my stinking nephew, Chris, (no bitterness here) who I asked to share his recipe for this blog. Here’s his response:

“The recipe should be worthy of a footnote, as it’s been the most successful run since the 1949-53 New York Yankees, but I have to keep it under wraps until I start losing (if that ever happens). Unfortunately, I am ultra competitive and cannot release the information.”

Does he bake? No. As far as I know, the closest he comes to food is the fact that he eats it and looks like Bobby Flay. He handles sports communications for one of the best teams in baseball. I won’t say who because I don’t want to be responsible for his kidnapping in case someone is desperate to get the recipe. He eats, lives and breathes sports – not baking. Further proof the world is an unfair place.

The moment of victory – Elissa reveling in her win.

His competitiveness is a family trait inherited from my mom. She shamelessly bribed my nephews with dollar bills to vote for her pie in the contest’s gritty early years. This was probably because she knew her pies needed help. Hers were an interesting shade of yellowish-green compared to the other lovely caramel colored pies. When asked about her ingredients, she proudly said, “I put inna nading but eggs.” She piled them in  — hoping for a custard-like texture. It didn’t work.

She never won, but never stopped trying. Sounds disturbingly like me.

The contest has not been without controversy. In 2003, my sister-in-law, Donna entered a pie that won. Was the pie hers? No. Was that legal? No.  Did the long arm of the law come down hard? Yes.

Chris, who recorded it for posterity said, that when the pie won first place, Donna blurted out that it had been made by her friend, Cindy Uvena.

When this treachery was discovered, brother Bob, grabbed the wooden meat tenderizer/gavel and called the family to order with a resounding whack on the counter. He asked Bernie if he knew anything about it and Bernie, who was several glasses of wine in, sheepishly admitted transporting the traitorous pie in the car. Our own brother was an accomplice! My nephew, Matt, who had just come in second to an outsider’s pie was yelling, “Who the heck is Cindy Uvena?”

Donna ended up with a three year pie suspension. Her accomplice, Bernie, got a one year suspension, and Matt had to live with the knowledge that he came in second to a non-Tunno pie.

There have been other moments, like the 2012 uprising when Bob wanted to change the rules. Right now everyone tastes and votes for first, second and third place among the 12 to 14 pies. Bob wanted to break the pies into smaller groups because eyes start to glaze over and blood sugars go out of control after the fourth taste. Each group would claim a winner and the winners would be pitted against each other.

There was grumbling, but Bob is a force (much like my mother) with or without a meat tenderizer mallet/gavel. I think I came in third that year. Oh the humiliation. It’s a good idea though, because who wants to taste 14 pies?

I love this contest and the fact that we’re all so damned competitive. There is smack talk to make it more exciting, (thank you Chris – you know I love you) and some years the entries are unbelievably bad like the salt pie my dad made when he was in his 90’s. Not sure what happened, but Bernie (his sous chef) must have looked away when Dad was adding the salt to the filling. Everyone did their best not to spit it out and even Dad said, “That tastes terrible!”

But it’s great fun and even though we tease, we really do enjoy it and end up loving each other again, once the sugar high wears off.

I won’t be there this year, but I think:

#2. I, Little Miss Crusty Pants, say crust should be a factor because it’s the whole pie that should be judged, not just the filling. Looks should matter too.

#3. Everyone should vote for their favorite, with no first second or third.  The pie with the most votes is the winner, then second and third place would be the pies with the next number of votes.

#4. Each pie should be numbered, so no one knows what number each pie gets. This way we avoid contestants ruthlessly voting for their own. (Yes, I did and still didn’t win!)

#5. Small pieces of each numbered pie should be placed on plates by a non-participant.

#6. A non-participant should be the one who counts the votes. I won’t say who’s been counting them in the past, but his name rhymes with Swiss. (He always shows us the tallies and, damn him, he always wins, but when dealing with a family with a Kennedy competitive streak, it’s best to take him out of the line of fire for his own safety.)

#7. I also think other pies should be allowed and there can be a separate category for those.

#8. Someone should buy Bob a real gavel.

If only we could get a real judge to come in, now that would be great.  Any Pittsburgh food critics out there who love pumpkin pie and want to judge? Please write! My family needs you!

(Hey, while you’re dreaming of pumpkin pie, check out my online store!)

Close up on Fran’s Always a Contender Pumpkin Pie.

3 cups half and half

Mix together flour, salt and sugar.  Cut in butter and Crisco.  When it resembles coarse meal, add a little milk (Not all of it!) — enough to bring about 1/4 of the dough together. When it holds together (it will be sticky — better too wet than not wet enough) place it on a floured piece of plastic wrap. Wrap the plastic around the dough and put it in the refrigerator to chill. Do that again and again until you have no flour mixture left.  You should have four to five small discs of dough in plastic.  When chilled, roll out dough on a clean, floured surface. Makes enough for two double crust pies.

Roll out crust and place in a pie plate.  Flute or crimp the edges of the dough and set aside.

Combine pumpkin, eggs, sugar, spices, salt and half and half.  Mix thoroughly.  Pour into pie crust and place on top of a cookie sheet in the 350 oven.  If you have a pie crust shield, you should definitely use it so your crust doesn’t burn. A Mrs. Anderson’s basic one is $4.99 at Bed Bath and Beyond, a prettier one is available at Williams Sonoma for $6.40. They probably work equally well. If you want, you can very lightly brush the crust with 1/2 and 1/2 for a nicer finish.

A Holiday Message in My Favorite Christmas Carol

Oh, Stuff It! (Your Zucchini, That Is)